As China has been devastated by heavy rainfalls, the Three Gorges Dam is under heavy flood pressure.

The Three Gorges Dam is a hydroelectric dam situated in the Yangtze River in Hubei province, China. It is currently the largest hydroelectric project in the world in terms of maximum capacity. The project was approved by the Chinese government in 1992 and has been operational since 2012.

The benefits of the project include the high power generation, flood control and the capability of ship navigation downstream. It also acts as a tourist attraction. However, many were opposed to the realization of the dam since it required numerous people to relocate and imposed some environmental impacts. The area which the current reservoir occupies, used to accommodate 2 cities, 114 towns and 1,680 villages which were completely evacuated.

This summer, the Yangtze basin has experienced its highest precipitation rates in 60 years, a fact that has caused major floods. Authorities began taking measures to protect communities and cities including building barriers and reinforcing the existing infrastructure. On July 19, 2020, officials decided to demolish a dam in eastern China so that water can be released downstream and the upstream level was reduced.

A dam functions as a barrier for waterflow, trapping water in a basin preventing extreme flooding downstream. During the dry season which lasts from October to May, the water level in the Three Gorges Dam reservoir is kept at a maximum level of 175 meters, an elevation that favors power generation. However, before the summer rainfalls begin, the level is dropped by 30 meters in order to provide additional space for the incoming waterflow. When the safety level is exceeded, water is released downstream and some regions may be threatened by flooding. The maximum capacity of the reservoir can reach 22 billion m3 and its maximum water level is 175 meters.

Whether the Three Gorges Dam is providing adequate flood control is currently doubted. The dam has lifted its spillways and floodgates many times since late June and has released water downstream, a fact that raises concerns over its reliability as a flood control facility. Recently, Dam officials opened the floodgates during July 25-26 and water was released downstream as they were expecting intense rainfalls during the following days.

On July 28, 2020, officials reported a massive water flow in the reservoir that ranged between 50,000 and 60,000 m3 per second. The downstream water release was kept constant at 38,000 m3 per second so that flood incidents would be mitigated and communities can be prepared, building and upgrading embankments and barriers. At this rate, the reservoir is expected to fill again in 13 days.

When asked about whether the Three Gorges Dam has aggravated the flood in the middle and lower stream of Yangtze River, the state-owned China Three Gorges Corporation answered: "...Usually, the reservoir will let the water flow through generating units. Only when the outflow volume surpasses the capability of the units, would the reservoir apply floodwater discharge channels. However, discharging floodwater does not mean the reservoir does not apply its flood defense function".

Major research that has been conducted to evaluate the flood control potential of the dam, suggests that it can alleviate intense waterflow in regular events but not in extreme incidents. Studies have found that the reservoir is too small to control extreme flooding and protect communities and cities downstream.

However, many suggest that the dam receives too much responsibility for the situation as it cannot alone control the waterflow of Yangtze, the world's third largest river in terms of volume. Experts suggest that it is "unrealistic to expect one dam, no matter how big, to resolve floods of this scale" and emphasize that China should have focused on establishing smaller dam facilities that would control flood flows and would be constructed in key locations along the river.

According to recent updates, the heavy precipitation rates and floods have impacted more than 50 million people. 3,68 million of them have evacuated their residences while 158 have been reported dead or missing. The financial loss stands at around $20.5 billion. 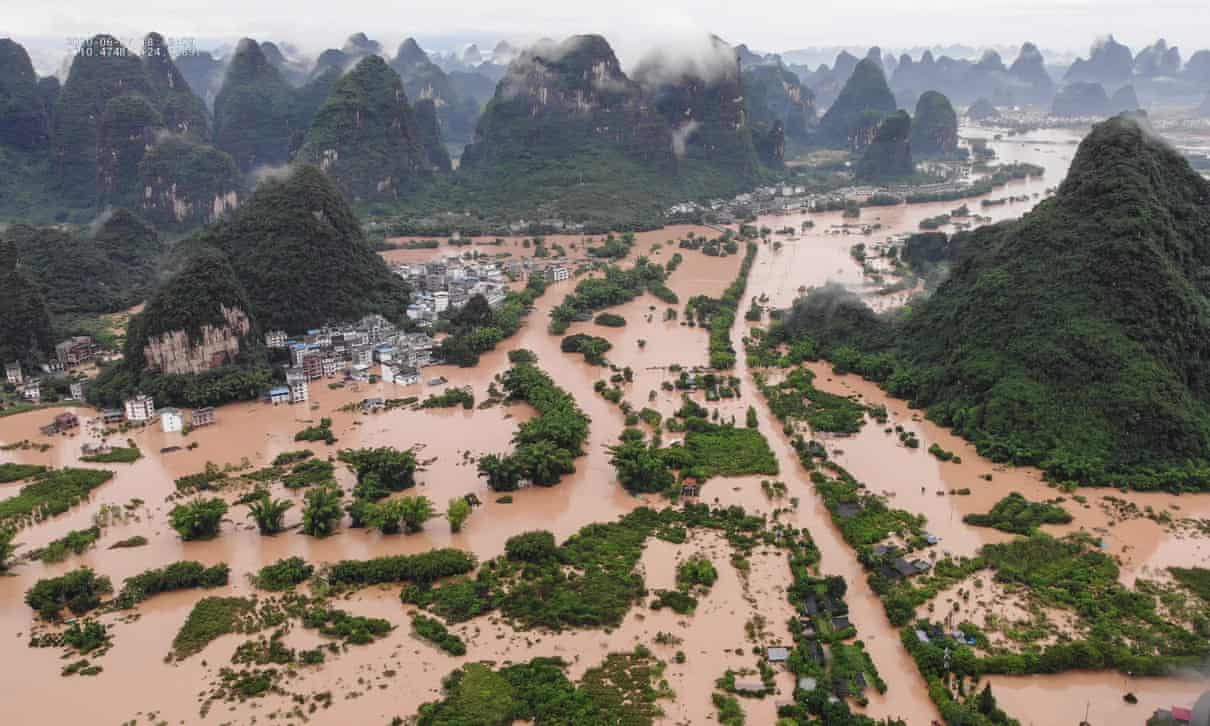 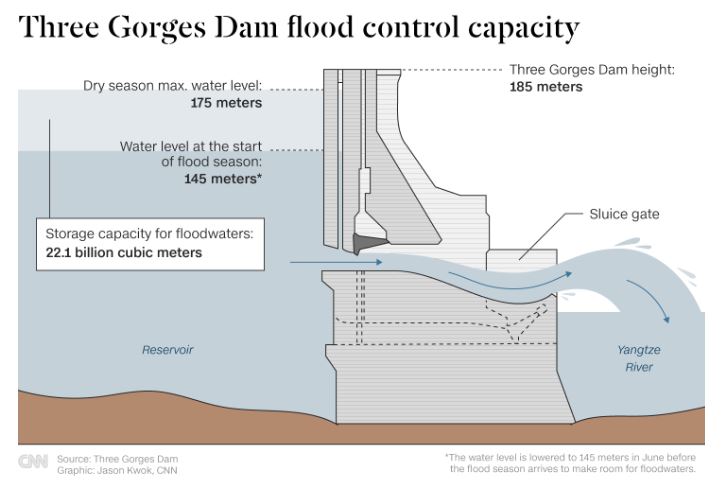 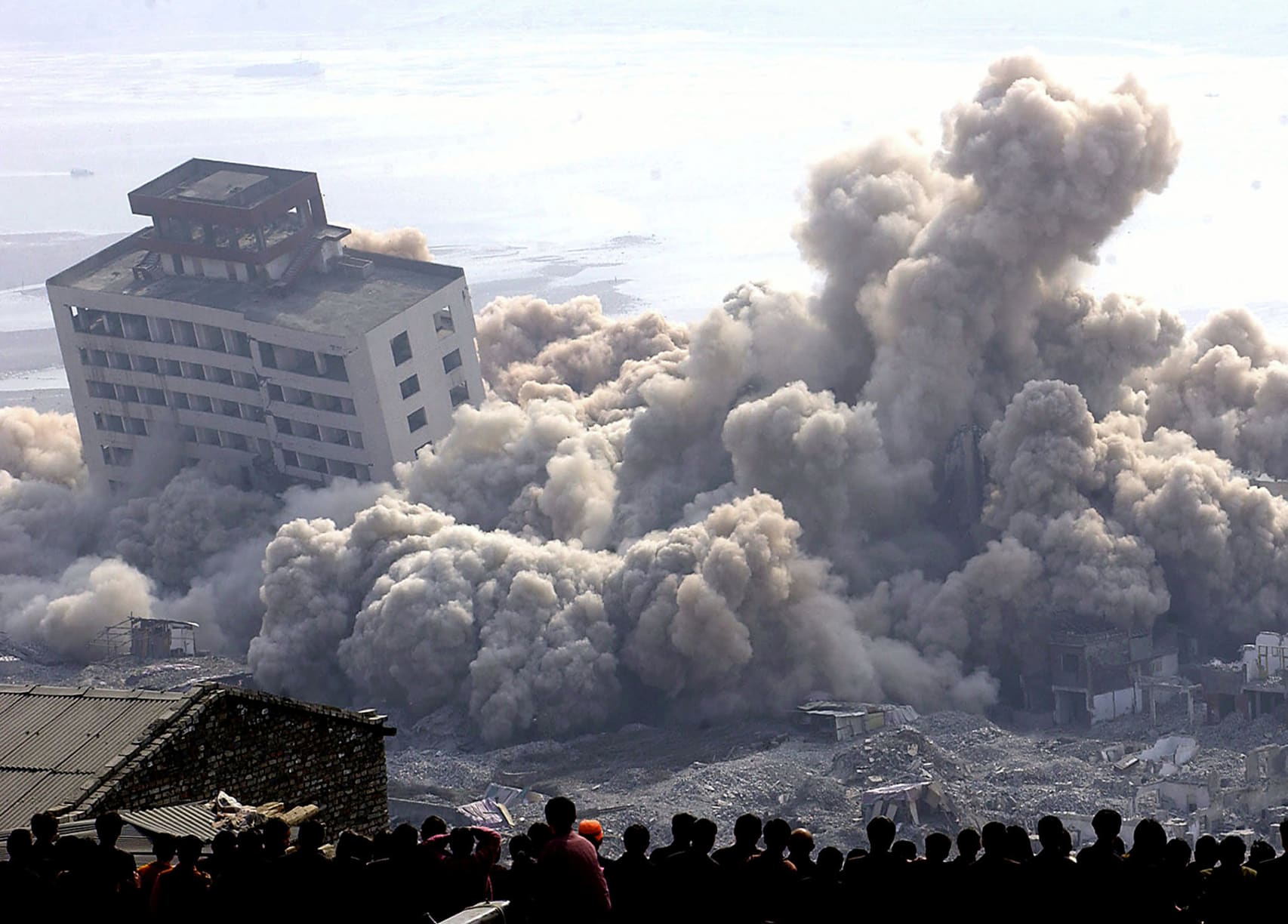 Footage of the Three Gorges Dam shot in July 2020
Reuters