On May 19, 2020, two dams in Michigan breached causing extensive flooding and infrastructure damage, and raising questions about the United States deteriorating dam structures.

Both earth dams were located in Midland County, Michigan and were distanced less than 11 kilometers away. The Ederville dam experienced a slope failure that allowed water to undermine the facility and flood the surrounding area, something that indicates that the failure was not due to a spillway incapacity but a rather concerning failure. The following impressive video captured the moment of initiation of the breach at Ederville dam:

When Ederville dam partially collapsed, large quantities of water were directed downstream to Sanford Lake. As a result, the Sanford dam breached but did not suffer critical structural damage. Currently, the area is evacuated and Sanford Lake has dried out.

The dam failures resulted in numerous evacuations and, according to estimates, the financial cost of the disaster may reach $1 billion. What is more concerning is whether this is an isolated incident or a precursor of more similar failures to come.

The stability of United States dams has been mainly impacted by 2 factors:

The United States currently has more than 90,000 active dams, most of them constructed decades ago based on different standards than current regulatory codes (both in terms of structural integrity and precipitation capacity). Within the next 5 years, 7 out of 10 of those dams will be more than 50 years old. According to the U.S. National Inventory of Dams, more than 17% of the existing facilities may lead to casualties if they fail in the future.

According to the American Society of Civil Engineers (ASCE), many dams have not undergone the upgrades or the maintenance works needed due to lack of funding and therefore, more than 2,170 of them are considered to be of high-risk. It is estimated that an amount of $45 billion would be required to repair them. According to a 2017 ASCE Infrastructure Report Card, the dam sector earns a -poor- D grade.

In addition, more and more heavy rainfalls struck the U.S. in recent years as a result of climate change. According to U.S. Global Change Research Program, the Upper Midwest States receive 40% more heavy precipitation than before.

The combination of those two factors could prove to be devastating for U.S. dam infrastructure in the future. According to a report issued in 2019, the exact amount of dams that are under severe threat is unknown. Data are not available as some States have not published their dam ratings while others did not have the funding to conduct a detailed assessment of the structures' conditions. 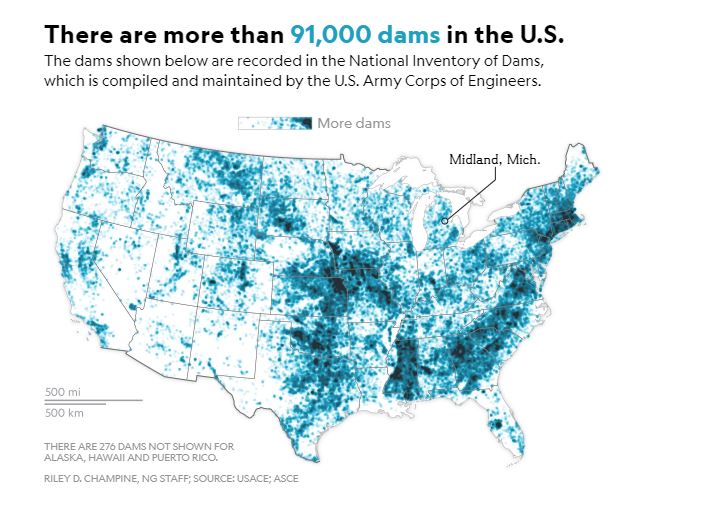