Thousands of people have been evacuated after 2 dams in Michigan breached following heavy rainfalls.

Both the Edenville and the Sanford dams, distanced about 11 kilometers apart and situated 225 kilometers north of Detroit breached on May 19, 2020, resulting in extensive flooding in the vicinity of the region. The facilities are established in the Tittabawassee River that flows through the state of Michigan.

According to officials, about 10,000 local residents and 3,500 houses have been affected but, fortunately, there have been no reports about fatalities or injuries.

The failure of Edenville Dam

The Dam is located 1,6 kilometers north of the town of Edenville. Constructed in 1924, it is an earth dam made up mostly of compacted layers of soil material. It measures 16 meters in height, 2000 meters in length and its concrete spillway stretches for 21 meters.

Following heavy rainfalls, the dam partially failed resulting in extensive flooding. The causes of the dam's breach are under investigation. Images and footage captured prior to the failure (see the image and video in the Media section below) indicate that there was a leakage very close to the spillway and therefore internal water flow may have destabilized the structure. According to a report issued in 2018, the license of the dam had been revoked by the Federal Energy Regulatory Commission as, among other violations, the structure would not perform adequately in a maximum flood scenario.

An impressive video capturing the moment of initiation of the breach:

Another video (footage attached in the Media section below) of the flood following the breach of the dam was captured by helicopter.

The breach of Sanford dam

Sanford dam is also an earth dam that was completed in 1925 and is used for hydroelectric power generation. The condition of the facility was deteriorated by the failure of the, upstream situated, Edenville dam as more water was directed to Sanford Lake.

The case of Sanford dam is different as the facility has not been structurally affected according to updates on Wednesday, May 20, 2020. However, the floodwaters have breached the spillway of the dam which is currently at risk of failure. "A structural collapse of the Sanford dam is imminent", Ahmad Bajjey, a Meteorologist in Michigan, tweeted.

Midland county declared a state of emergency and alerted people in Sanford, Edenville and other towns to evacuate their residences immediately. Gretchen Whitmer, Michigan Governor, said that downtown Midland could be flooded by up to 3 meters of water. "We are anticipating a historic high water level," Gov. Whitmer, stated.

According to a report, Midland County received 140 centimeters of rain in just 36 hours from May 17 to 18. This amount of rain indicates that such an event occurs once in 25-50 years. An interesting chart on the water volume discharge of the Tittabawassee River is provided by the United States Geological Survey (USGS). The current rate is more than 25 times higher than the average daily data value for May.

People are accommodated in shelters, a fact that contributes to the hazard of the COVID-19 pandemic which has significantly affected the United States. They are provided with  basic protective equipment by emergency stuff. "To go through this in the midst of a global pandemic is almost unthinkable. But we are here, and to the best of our ability we are going to navigate this together," Gov. Whitmer added.

As of May 20, 2020, the Tittabawassee River has experienced a record high water level, not seen in 32 years. The current water level is at 10,5 meters (while the flood level is at 8,5 meters)  and is expected to rise further. The previous extensive flood in Michigan dates back to 1986. The latter is known as the worst natural disaster in the history of the State and resulted in extensive infrastructure damage and devastated fields.

According to recent assessments, there are 19 dams in Michigan ranked as being in poor or unsatisfactory condition. 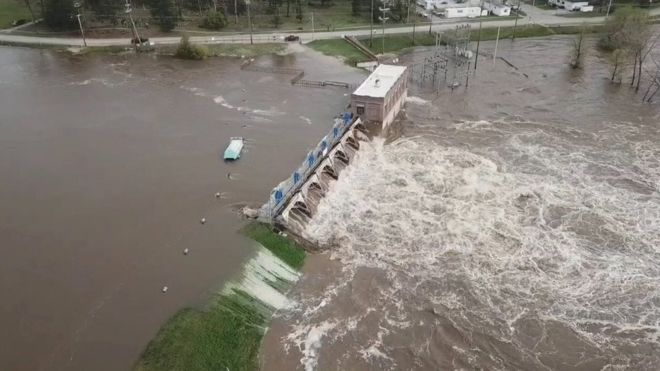 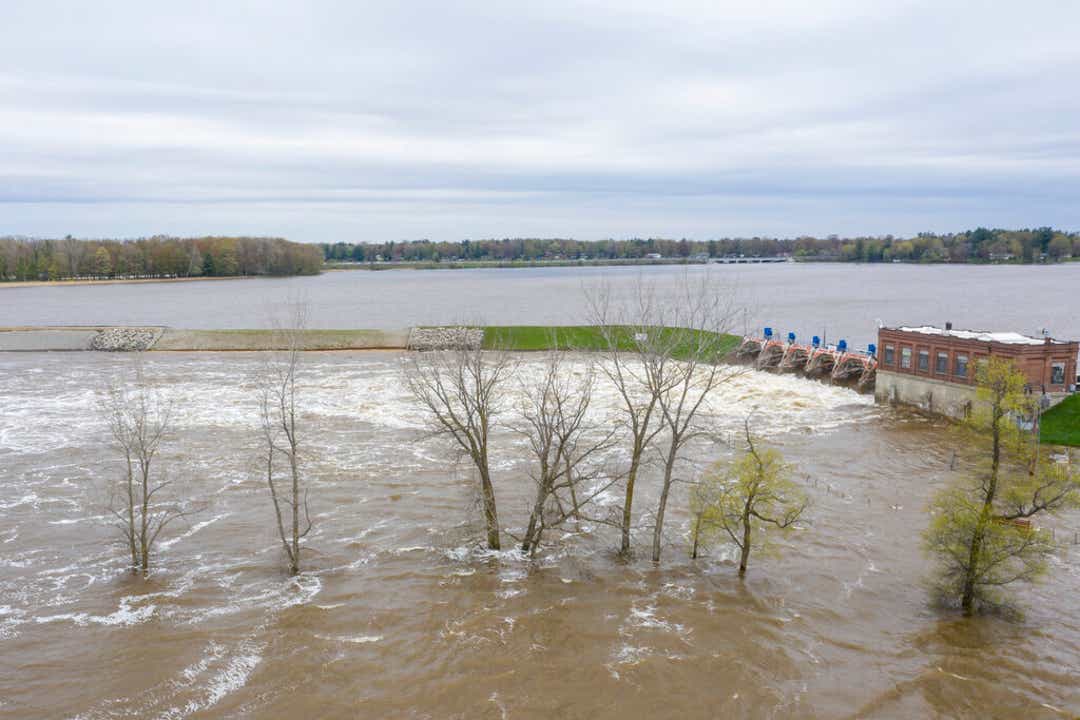 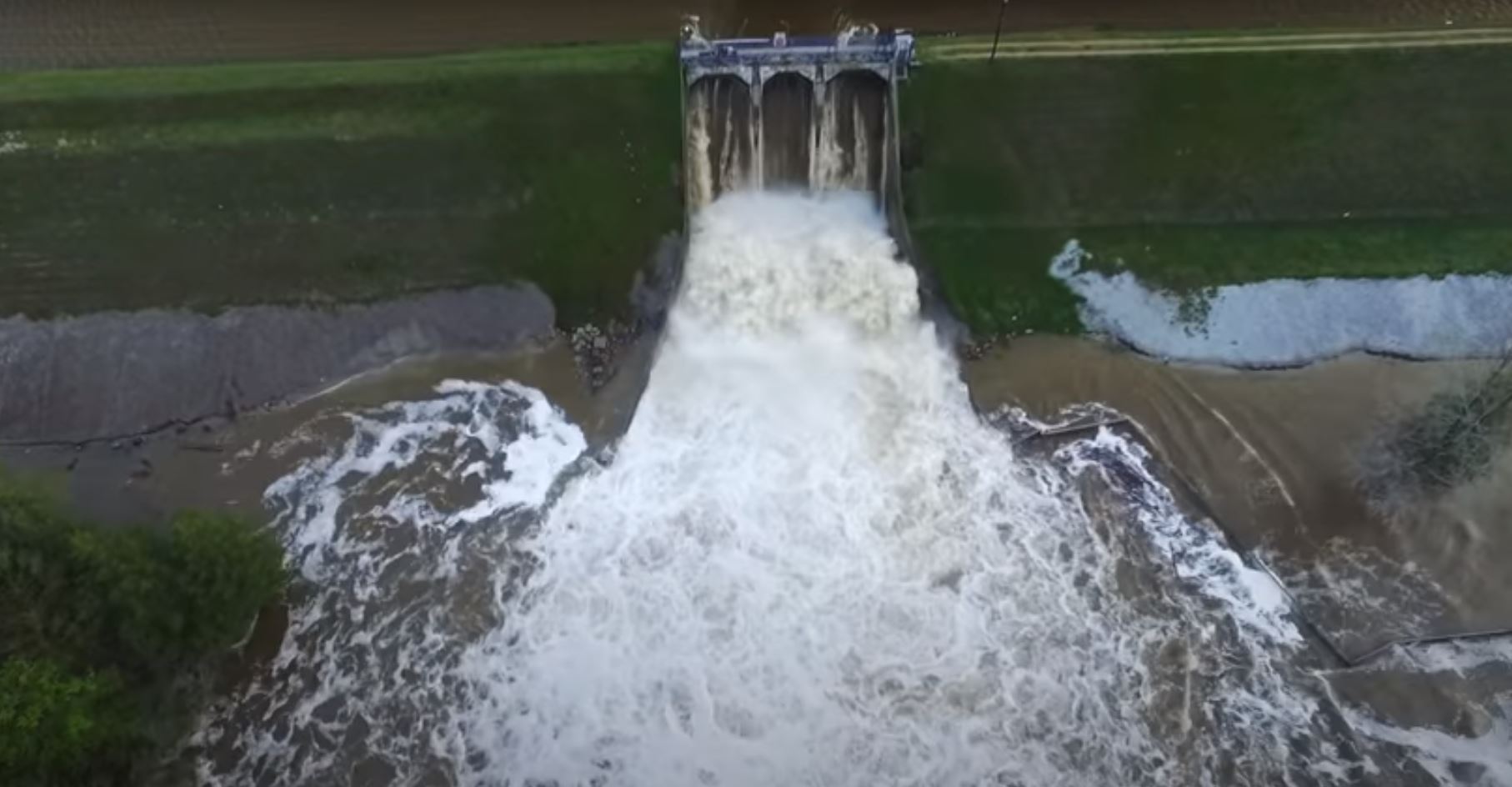 Edenville Dam at Flood Stage hours before the breach
timbuckyball