Hoover Dam is the tallest arch dam constructed in the United States and forms one of the largest artificial reservoirs worldwide.

The facility was initially named Boulder Dam but the name was changed in 1947 as the structure was dedicated to Herbert Hoover, the 31st President of the United States. Throughout the years, it has received great recognition as an engineering project and has been declared a National Historic Civil Engineering Landmark by ASCE (American Society of Civil Engineers).

The construction of the Hoover Dam lasted between 1930 and 1936. The structure is established in Black Canyon, which is located at the border of Arizona and Nevada. The dam created one of the largest artificial lakes in the world known as Lake Mead. 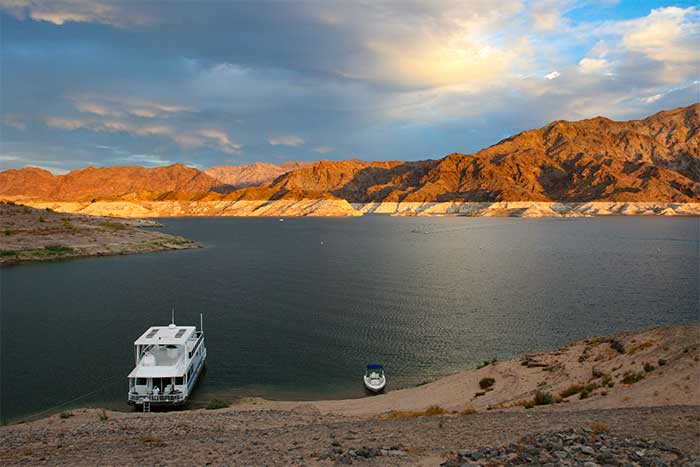 Figure 1: The Lake Mead that lies on the Colorado River (Source: DesertUSA)

In the late 19th century and early 20th century, an effort to divert the Colorado River to provide water for agriculture, was already underway. Farmers used canals that proved to be inefficient and expensive to maintain. In 1905, the river's waterflow damaged the canals and flooded a large area including the Salton Sea which was completely dry at that period.

The situation was handled by the U.S. Bureau of Reclamation which made plans for a vast dam project that could control the waterflow, produce electricity and provide water for irrigation. The project raised concerns due to its difficulty level as well as its high cost ($49 million in 1931 or $691 million in 2020 accounting for the inflation rate). However, the dam was finally approved by U.S. President Calvin Coolidge, who is also responsible for the dedication to Herbert Hoover.

The first name of the Dam (Boulder Dam) is misleading regarding the location of the facility. At first, Boulder Canyon was considered a good location for the establishment of the project but the facility could not be founded there after a major fault was detected. Active faults can lead to large differential displacements of a dam structure or even cause water leakages, therefore, they are avoided when a dam is designed. Finally, Black Canyon was selected as an ideal location.

Design of the Dam

Based on the topography of Black Canyon, an arch concrete structure was selected. The foundations and the abutments of the dam were ideal for this type of construction since they consist of andesite breccia, a hard and durable volcanic rock. Some major characteristics of the structure are presented in Table 1.

An arch-gravity dam is a facility that benefits from the characteristics of both arch and gravity dams. The structure is curved towards its abutments and transfers the compressional forces to the stiff rock walls. Moreover, it is also designed to take advantage of the massive weight of the structure to withstand the forces of the water, despite being usually thinner than a conventional gravity dam. Unreinforced concrete is commonly used except for the structural part of the spillway.

The project needed massive labor resources (about 5,000 laborers). To accommodate the workers, an entire community, Boulder City, was built at the beginning phase of the dam's construction works. As the construction period coincided with the U.S. Great Depression (1929-1933), many unemployed workers had already moved to the dam's site along with their families seeking a job opportunity.

Construction of the Dam

In 1931, the first phase of the project initiated by blasting of the canyon rock walls to construct hydraulic tunnels that would be used to temporarily divert the flow of the Colorado River until the dam was completed. The project's timeline was strict and laborers had to work under extreme conditions (high temperatures and hazardous concentrations of carbon monoxide as no proper ventilation was provided) to complete the tunnel excavations. The situation led to a 6-day strike in August 1931.

To create a permanent diversion, 4 tunnels (two at the side of Nevada and two in Arizona) were excavated. The Colorado River was re-directed in November 1932 by using the two tunnels on the Arizona side while the other 2 served as reserve structures in case of a flood. This was made possible by the establishment of a smaller, temporary cofferdam constructed using the rock debris deriving from the excavation of the tunnels. 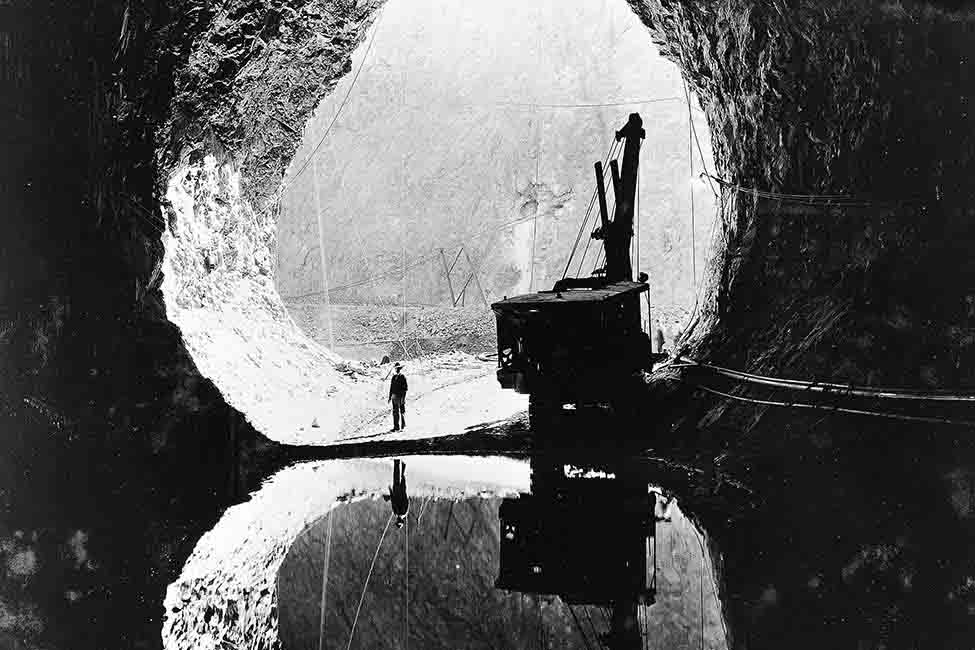 To protect the equipment and the people working on-site from floods, another cofferdam was constructed. Once the area was drained, works on the foundation of the dam initiated. The facility would be founded on solid volcanic rock, therefore, the contractors had to remove the upper, loose layers of soil material. The foundation of the dam was reinforced with a fluid that is utilized in construction projects to fill cavities known as grout.

Concrete production plants were established at the construction site. Pouring of concrete began on the summer of 1933. A major problem associated with the enormity of the dam arose. It was found out that if the concrete was poured in one stage, the results would be catastrophic for the dam. As concrete cures, its temperature tends to increase leading to contraction. If this process proceeds unevenly throughout the dam's concrete mass, it would result in crack initiation and propagation. Engineers from the Bureau of Reclamation estimated that, in such a scenario, the curing process could last more than 100 years.

Therefore, the structure was built incrementally in segments using interlocking concrete blocks. The curing process was accelerated with the installation of water pipes through the concrete blocks which were later filled with grout. 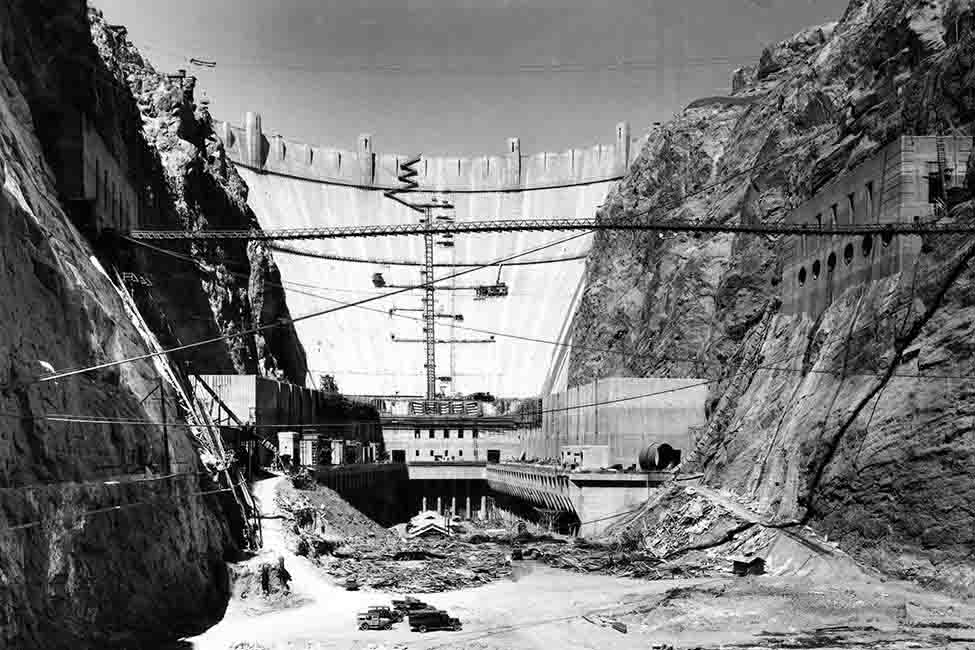 The works were completed in spring 1935, after about 2,5 million m3 of concrete were poured.

Dam spillways provide a passage for water in case of an overflow. They are established at the top parts of the dams and are activated once the water level is too high. Therefore, they prevent water from overflowing the dam.

There are 2 spillways in Hoover Dam, placed on both sides of the abutments, about 8 meters below the top of the structure. Any excess water that runs through the spillway, it is directed downstream via 15-meter wide tunnels which are connected with the diversion tunnels of the basin. Each of the spillways can carry more than 5500 m3 of water per second, the equivalent flow rate of Niagara Falls.

The first spillway began its operation in the summer of 1941, following Lake Mead reaching its maximum level.

The spillways were highly used in 1983 when record water elevations struck the basin. The water flows damaged the dam's concrete base which had to be repaired. 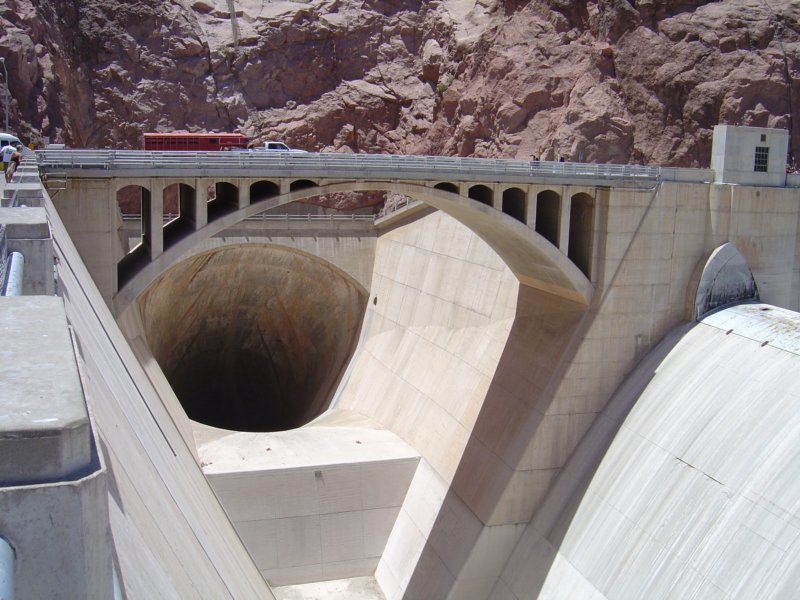 The Hoover Powerplant was established together with the arch-gravity dam and it is located at the base of the facility. The first 3 generators began operating in late 1936 and more followed the following years.

The Hoover Dam was the largest hydroelectric facility in the United States for 10 years (1939-1949), and it is still one of the most powerful stations. Currently, it produces around 4 billion kWh annually with a maximum capacity of 2,080 MW. Its performance had been decaying during the past decade due to a constant drought period that affected the water levels of Lake Mead which experienced its lowest level in 2016. However, the situation has reversed in recent years.

The last generating units in the dam were installed in 1961. Currently, it has 17 main turbines which replaced the original ones in the 1980s and 1990s. The powerplant is still operated by the U.S. Bureau of Reclamation.

Take a tour at the Hoover Dam Powerplant by watching the video below.

Hoover Dam as a Landmark and Tourist Attraction

Hoover Dam is currently a popular tourist destination, receiving about 1 million tourists annually. In 2005, as the number of visitors and the travelers between the states of Arizona and Nevada increased, traffic issues emerged and officials began the construction of the Hoover Dam Bypass Project, an arch bridge that connects the states of Arizona and Nevada. The bridge is established above the Colorado River and near the dam. The old road is now utilized only by the visitors of the dam. 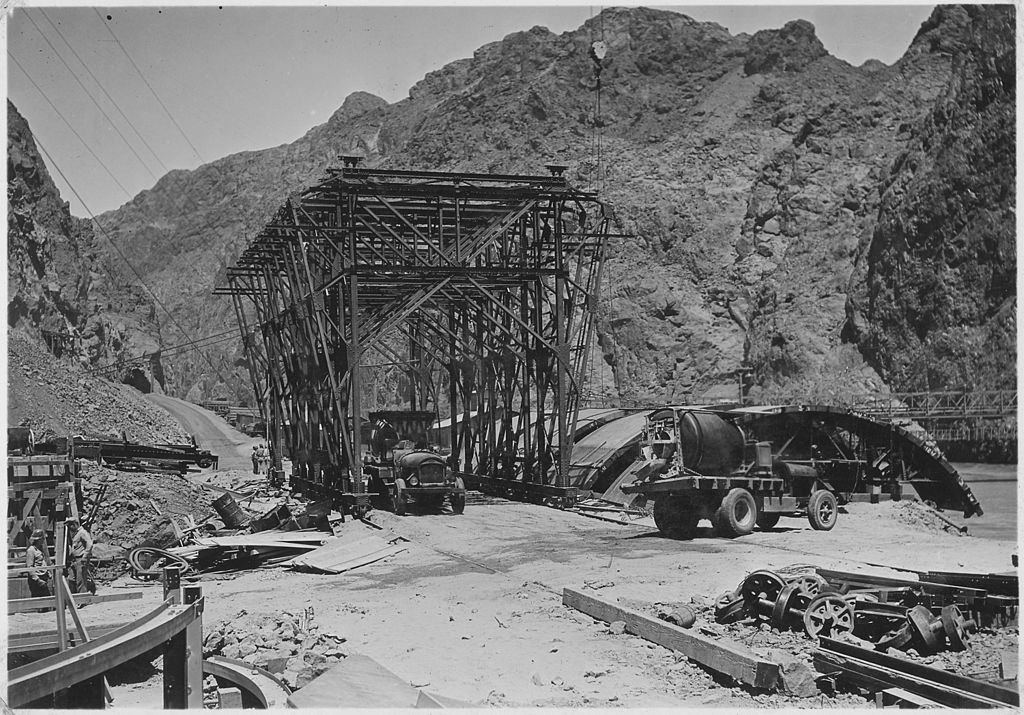 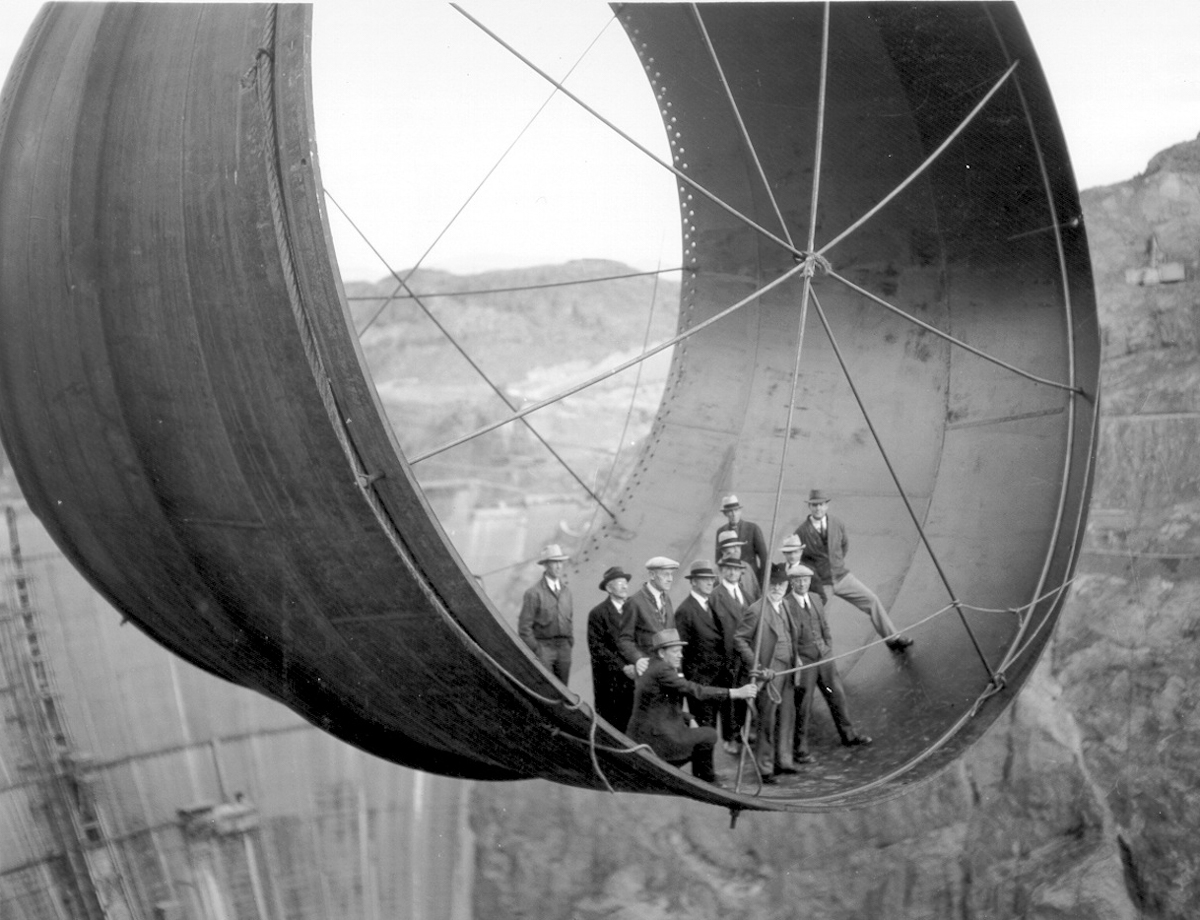 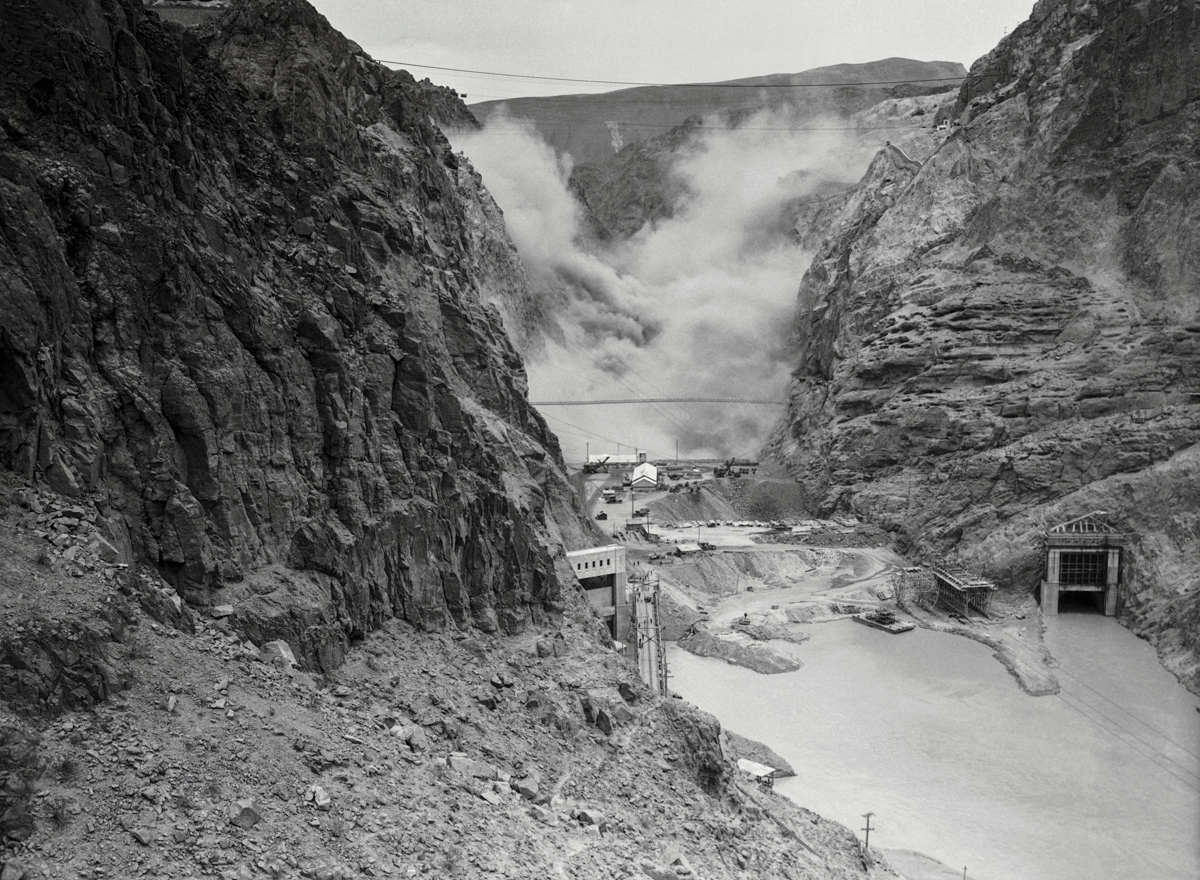 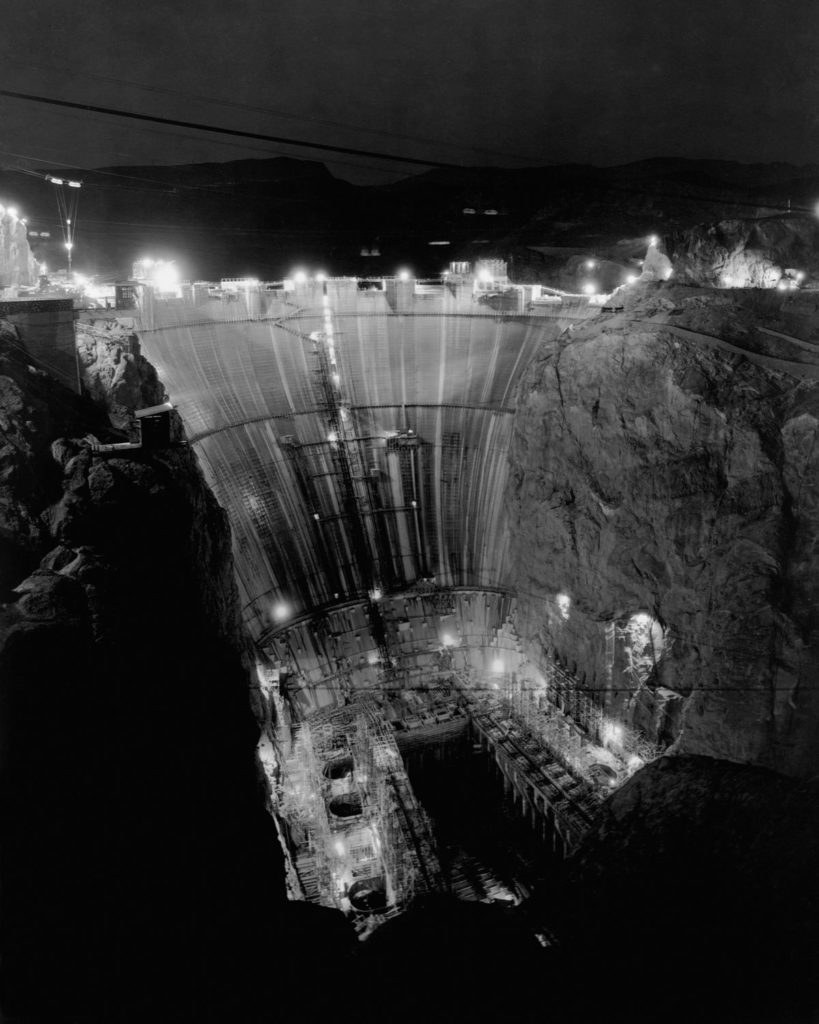