The Auburn Dam would be the largest concrete arched dam in the world. It was a project of the Bureau of Reclamation. The purpose of this dam was hydroelectricity production, recreation, water supply and most importantly flood control of the Sacramento valley. The dam would have:

The 1971 San Fernando earthquake and the 1975 Oroville Earthquake had initiated more extensive geotechnical investigations. As a result of these investigations, a fault, which was part of the Foothill fault system, was identified and for that reason the design has changed to a curved gravity dam.

The construction stopped because the scenario of failures increased the public awareness and stopped the project. A failure of this dam would cause also the failure of the Folsom dam and would finally flood the city of Sacramento. Even though, this scenario was not so possible, the probability of the existent truncated fault to cause a movement of 8-12inches could not be discounted.

For that reason, in 1975, the construction of the dam stopped.

With the red arrow is indicated the embankment. The embankment was overtopped during a flood for which the bypass tunnel was not designed for. . The tunnel, since then, has been leading the waters through the mountain. This tunnel was designed probably for a 20-year flood, and since so many years passed, the fact that it finally failed once should not be considered a failure.

The bypass tunnel of the Auburn Dam

The bypass tunnel used during the construction period. The construction of the dam stopped and since then the tunnel has been leading the waters through the mountain. This tunnel was designed probably for a 20-year flood. 25 years later (approximately) a flood bigger than the design flood of the tunnel occurred and caused the overtopping and failure of the embankment used during construction. The embankment was totally eroded in one side. 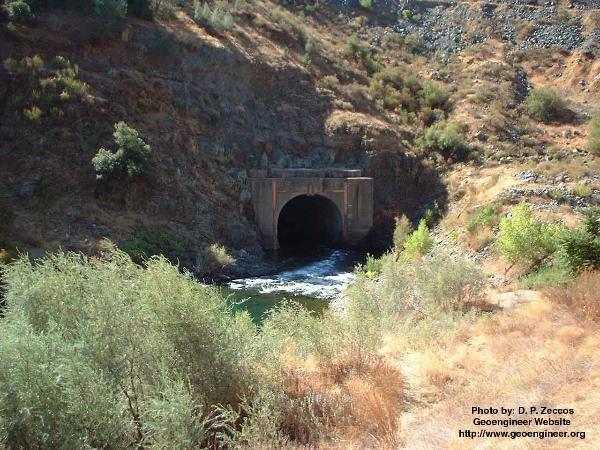 The foundation of the right abutment of Auburn Dam 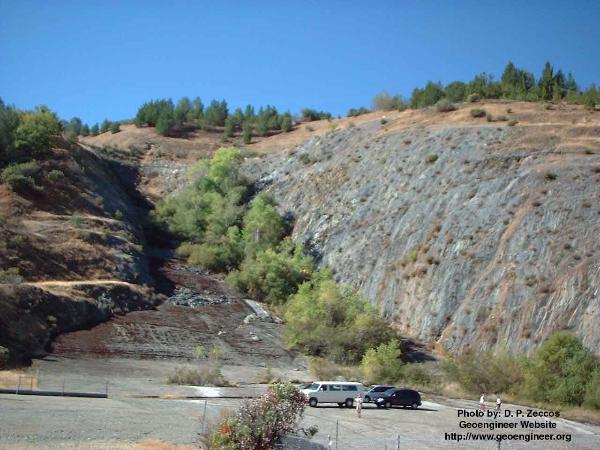 Leaflet of the Bureau of Reclamation Mid Pacific region about the Auburn-Folsom Unit and information collected during the field trip in the Sierra Nevada, as part of the "Engineering Geology" course curriculum, instructed by Professor N. Sitar, Department of Civil & Environmental Engineering, University of California at Berkeley.

Hayward Baker will be at the "SME 2018 Annual Conference"