The triggering factors of massive, pre-historic rockslides that occurred in the Alps have finally been revealed.

Signs of ancient rockslides are evident in the European Alps as rock debris has accumulated in valleys. Since there are no historic records of those landslides, there has been a long-lasting debate over their causes.

The landslides are dispersed in relatively small areas and appear to have occurred during the same periods. Moreover, data show that the ground movements were massive and carried large quantities of rocks downwards. Hence, if similar incidents struck in a populated region in the Alps, they would have a devastating impact.

Some researchers believe that the rockslides were caused by intense erosion or precipitation that destabilized the slopes while others suggest that the triggering factors were seismic shocks. However, until now, no unique explanation had been found since the rocky slopes vanished through time.

A new study conducted by scientists from the University of Innsbruck and the Central Institute for Meteorology and Geodynamics in Austria concluded that those rockslides were indeed triggered by earthquakes. The findings were published in Nature Communications.

The researchers could not find answers in the mountainous terrain; hence they focused their investigation on ocean and lake sedimentation, a process that is also impacted by seismic activity. In particular, scientists assessed two major rockslides in the Alps and retrieved boreholes from sedimentary rocks from two lakes.

The team's aim was to find traces of seismic activity within the sediments by applying sophisticated techniques such as computer tomography scans on the retrieved cores and hydroacoustics at the surface of the lake. Their findings suggest that 10 strong and shallow earthquakes occurred in the region during the past 10,000 years.

What was more interesting is that two of those temblors occurred at the same time with the studied rockslides. Therefore, the study deduced that the cause of the ground failures was the seismic shaking solving the chronic debate. Scientists also found patterns of another impact that earthquakes impose on slopes. A seismic shock may not trigger a landslide but also decrease the stability of slopes (seismic fatigue) due to the formation or cracks or due to the reduction of the material's shear strength. The team discovered that at least 5 earthquakes occurred in the studied region before the rockslides and the slopes' integrity was compromised.

It is also worth mentioning that since then, no major earthquakes have struck the region so similar rockslides have not been historically recorded. The developed technique can provide evidence on future landslide phenomena. The team's goal is to assess the findings and derive landslide hazards in populated areas in the Alps. 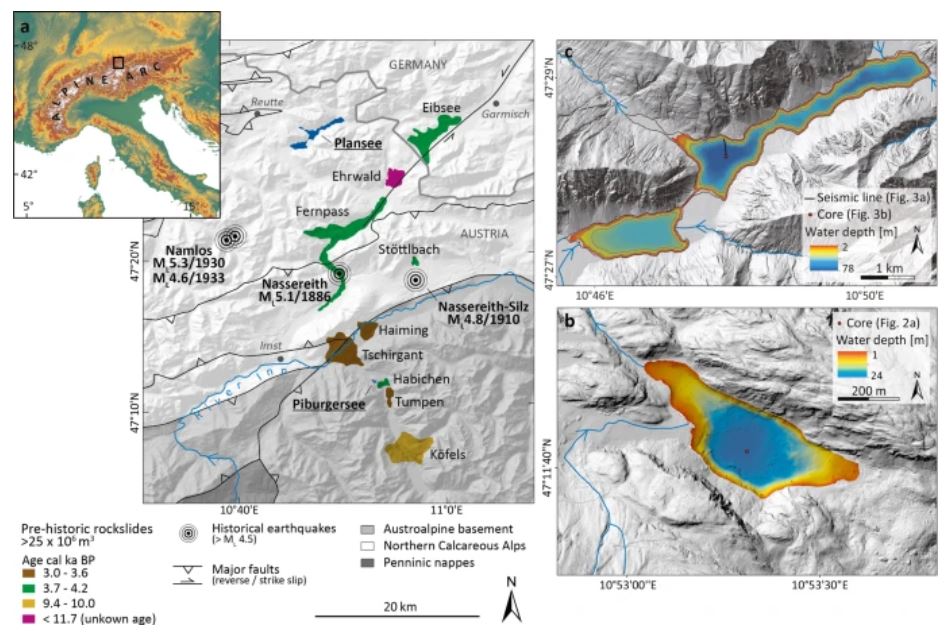 A major highway in India was closed due to a large rockslide. The landslide struck on Saturday, Sep...

According to a new study, smaller earthquakes have caused the strongest shaking incidents in the vi...

According to a new study, published in Seismological Research Letters, the deep landslides that wer...

A massive rockslide occurred on December 7, 2015 in Hanogi in Mandi district of  Himachal, India.  ...

A M 6.0 earthquake struck near the California and Nevada border on July 8, 2020. The seismic shock...

According to a new study, recently published in Seismological Research Letters, the season an earth...