Plans have been unveiled to expand the Paris metro system to connect the city with the greater Ile de France area.

The expansion will include 200 kilometers of new railway. The project is being called the Grand Paris Express. Most of the funding for the project is from public entities such as French investment groups, the European Investment Bank, and city and regional governments.

The current metro system consists of approximately 200 km of metro and rail lines. The expansion will increase this to over 400 km. There will be 77 new stops throughout Paris and Ile de France and it will be able to accommodate larger 8 car trains (current trains are 6 car). Faster operation will also be possible with trains arriving as rapidly as every 2-3 minutes. The project will span the next 15 years and is expected to be completed by 2030. Once completed, the Grand Paris Express will be one of the largest metro systems in the world.

The expansion will increase the daily passenger capacity of the system by two million up to a total of six million passengers serviced per day. The project will have significant economic and environmental benefits as well. It is estimated that the Grand Paris Express will increase France's GDP by approximately $4.5 billion per year and will create 15,000 jobs and indirectly create over 115,000 jobs. In addition, experts believe the expansion will reduce carbon dioxide emissions by 27.6 million metric tons through the year 2050.

Work began this year and officials hope that this investment into improved infrastructure will foster further growth and development of the surrounding areas. 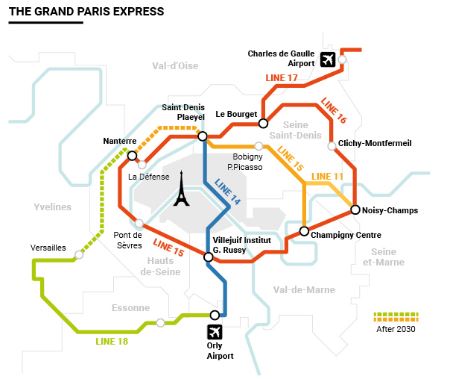 For buildings and structures, material selection,...

Off to a smooth start with Moretrench Industrial

Despite some regulatory delays, a major power pla...