How geological processes affect the concentration of carbon dioxide in the atmosphere: The case study of Taiwan

A new study, recently published in Nature Geoscience, focuses on the concentration of carbon dioxide in the Earth's atmosphere controlled by geological processes such as erosion and weathering of rocks.

It is already known that certain geological processes produce or store CO2. In particular, when new rocky formations come to the surface of the ground as a result of tectonics and/or erosion of overlying formations, they are exposed to acidic water and are, in turn, eroded.

The type of the rock affects the chemical processes of the erosion procedure and, eventually, controls the amount of CO2 that is stored or generated. For instance, if the water comes together with silicate minerals, limestones are formed via direct chemical precipitation. Travertines are common formations of such direct calcium carbonate precipitation. In that case, CO2 is trapped inside the formations for a long time period. However, if the acidic water contacts sulfurous minerals (e.g., cinnabar, pyrite, sphalerite, stibnite, galena), limestones dissolve and CO2 is produced. Nevertheless, quantitative data on determining which of those processes prevails in nature have not been derived yet and the new study comes to shed light on this issue.

To find answers, the research team focuses on Taiwan, an island with unique geological features. Taiwan is an earthquake-prone zone where powerful seismic shocks occur on a regular basis shifting the landscape. The southern part of Taiwan has recently emerged from the sea and its mountains are relatively lower and erode at a smaller rate compared to those of its central part. In both parts, silicate and sulfurous minerals exist. Moreover, the island is also frequently hit by typhoons, a fact that accelerates weathering and erosion processes. In addition, it is estimated that those erosion processes occur at a much higher rate in the center of the island compared to those on its southern section. Hence, the island is ideal to study the long-term CO2 balance.

The team collected water samples from rivers in the mountains of the 2 aforementioned regions in Taiwan and studied the concentration of silicate, sulfide and carbonate minerals in order to derive the amounts of CO2 produced or stored. They found that carbon dioxide is bound in the southern part of Taiwan. Nevertheless, in the central part where erosion processes are much faster and sulfide weathering prevails, CO2 is produced. In fact, the release processes that occur in the central part dominate and thus, Taiwan is an emitter of CO2.

The authors of the study emphasize that this may not always be the case. In different environments (e.g., the Alps, the Himalayas etc.) there are various geological features (such as sedimentation in alluvial plains that are rich in silicates) that may impact the carbon dioxide equilibrium. Therefore, there is a lot of research to be conducted in that direction before the effect of geological processes on CO2 concentration worldwide is comprehensively assessed. 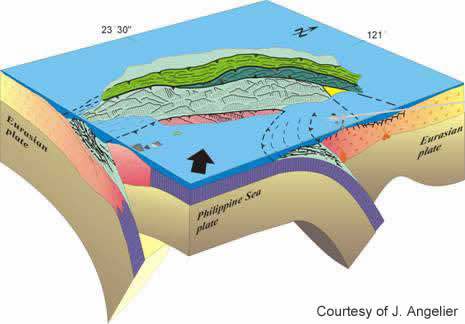 In a new study, scientists focus on how precipitation impacts erosion rates in mountainous terrains...

What controls the height of the world's mountains?

A new study comes to answer an interesting question. What determines the height of the earth's moun...

The complex impact of sea-mountains on earthquake incidents

Scientists studied the impact of underwater mountains dragged into subduction zones and the geodyna...

How predictable is rock's erosion by rivers? New study gives the answer!

Rock's erosion by rivers through the years helps geoscientists to detect the evolution of mountains...

New study&nbsp;shows that the storage of water produced from oil and gas exploitation using hydrauli...

According to a new study, recently published in Seismological Research Letters, the season an earth...

A study, recently published in Nature Communications, presents a new technique for quantifying the...