A study, recently published in Nature Communications, presents a new technique for quantifying the movement patterns of a remote, creeping landslide.

Scientists from the University of California, Berkeley, the United States Geological Survey (USGS) and Jet Propulsion Laboratory of NASA, have collaborated to study the Slumgullion landslide located in Colorado.

The Slumgullion landslide lies within the San Juan Mountains and is composed of volcanic rock debris. The slide consists of an inactive and an active component that is in motion for more than a century. Moreover, its active part experiences complex and differential movements whereas its boundaries are irregular. All these facts make the Slumgullion landslide extremely useful to study and derive critical conclusions about creeping movements of landslides.

The research team collected data from several UAVSAR (Uninhabited Aerial Vehicle Synthetic Aperture Radar) missions. The UAVSAR is practically an airborne radar attached to the bottom of an airplane that captures terrain structural information. By taking overlapping measurements of the ground, 3D digital elevation models can be derived with high accuracy. If two missions are conducted between two time periods, the deformation of the ground that occurred between this time span can be determined.

The UAVSAR missions cannot derive the landslide movements at depth but, scientists combined the surface data with field observations and measurements and managed to model the movement patterns in various depths. The effect of pore-water pressure on the landslide's movement was also taken into consideration by evaluating precipitation and snowmelt daily data.

In conclusion, the team "constructed a mechanical framework to quantify different features and movements of the landslide” by combining terrestrial, subsurface and air data.

The researchers found out that the central part of the slide is moving at the highest rate. The bottom and top parts are also moving but at a slower rate.

The image above presents the movement rates of each region. The maximum calculated displacement was 14 millimeters per day and was detected at the central part of the slide. According to William Schulz, a research geologist at the USGS and co-author of the study, most of the creeping movements occur in a thin shear zone that lies on the bottom part of the slide.

Regarding hydrological factors, the top part of the slide is sensitive to snowmelt while the central part presents different behavior in drought and wet periods. “It’s important to understand how landslides work and how they respond to environmental changes so that we can better predict when they might transition from this gradual motion to a more rapid, catastrophic failure,” Eric J. Fielding, a Principal Scientist at NASA's Jet Propulsion Laboratory and a co-author of the study, concludes. 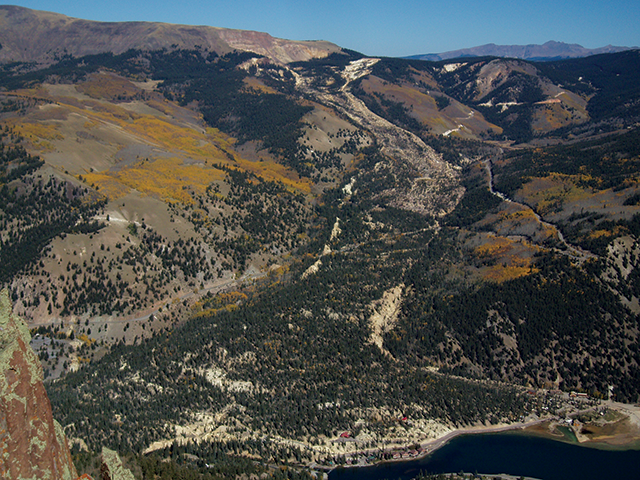 NASA is currently mapping the landslides that were triggered during the passage of Hurricane Eta th...

What caused the massive landslide in California's Big Sur

Scientists have conducted detailed investigation about the causes of the Mud Creek&nbsp;major landsl...

Citizen scientists at NASA’s service, for the creation of the largest landslide database

&nbsp;The aim is to get a better understanding of landslides with every report made Landslides ca...

Can satellites be used as an early warning system for landslides?