The 1.6-kilometre Ersmark tunnel will be constructed in Sweden by Spanish contractor Comsa in a consortium with Nortúnel S.A. After some delay due to an appeal, the Swedish Transport Administration (Trafikverket) says the contract is greenlit to be signed for the tunnel, which is part of the new Norrbothnia railway line.

The procurement for the tunnel construction has dragged on, as the first award in May to the Norwegian firm Veidekke did not go through. Veidekke decided not to extend its tender when the award was appealed by Spanish contractor Comsa Corporación, reported Swedish industry magazine for civil engineering Byggindustrin. A new award for the tunnel followed in October to a consortium of Comsa and Spanish tunnel contractor Nortúnel S.A, which constructed many tunnels in Spain. This was stated in the Swedish Transport Administration’s award decision from 27 October. Since the period for appeals against this award has expired, the way is now free to sign the contract.

“We are working further to start tunneling as soon as possible”, says Erik Storvall, project manager for the Ersmark tunnel. The tunnel will be approximately 1.6 kilometers long and is the only tunnel on the stretch between Umeå and Skellefteå.

The tunnel will initially be made single track, but is being prepared to accommodate double track in the future. As preparatory work, blasting was carried out between May and August this year, by drilling holes in the rock that are filled with explosives, lighters and fuses. The loosened rocks are crushed into smaller parts so they can be used again as rock fill on other sections in the construction of the Norrbothnia Railway, said Trafikverket.

The Norrbothnia line will be a 27-kilometre-long new railway line between Umeå and Luleå, along the Gulf of Bothnia which largely separates Sweden and Finland. Construction of the line began four years ago for the first section between Umeå and Dåva, and the first rail tracks for the line were anchored last August in Umeå.

Swedish Minister of Infrastructure Tomas Eneroth highlighted the Norrbothnia railway as an important investment to reach the climate goals at the milestone. “Sweden is growing and needs more investment in infrastructure. In the coming decades, we will be a railway construction country. It is a must to reach the climate goals. The Norrbotnia railway will have an incredible significance, not only for Norrbotten and Västerbotten, but for all of Sweden”, Eneroth said. 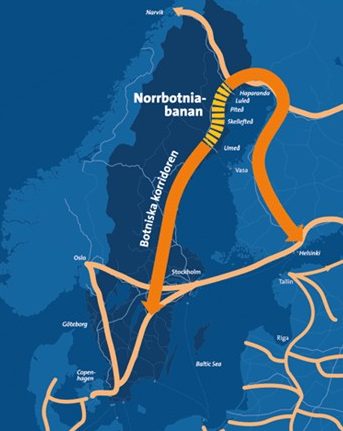 Indian Railways’ longest electrified tunnel has proven to be a major game changer in the country’s...