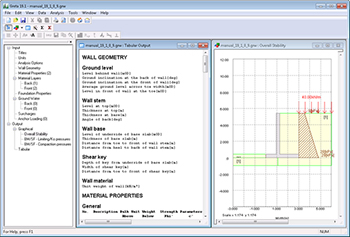 Greta analyses the stability of a gravity retaining wall and determines the bending moments and shear forces within the wall.

Taking the stress out of gravity retaining wall stability analysis

Greta analyses the stability of a gravity retaining wall and determines the bending moments and shear forces within the wall. The program asks the user two sets of earth pressure coefficients behind and in front of the wall; one set is used to calculate bending moments and shear forces in the stem, heel and toe of the retaining wall and the other used to calculate the resultant force on the base. The user must assess independently whether the resultant force on the base would be sufficient to cause a sliding, overturning or a bearing capacity failure within the soil under the toe. Sliding resistance and bearing capacity are calculated by the program.