A new study comes to shed light on a long-lasting mystery about the geology of the Grand Canyon. This involves a time gap in the canyon's rock formations that stretches for more than a billion years.

The complex geology of the Grand Canyon is one of the most studied worldwide and comprises of a combination of geological processes. The formation of the canyon began about 2 billion years ago when igneous and metamorphic rocks were formed and were subsequently overlaid by layers of sedimentary rocks. The 3 major rock formations encountered in the Grand Canyon were first identified by John Wesley Powell in the 1860s and 1870s, a geologist, soldier and explorer. These are: 1) A basement of metamorphic rocks, 2) The Precambrian Grand Canyon Supergroup, and 3) The Paleozoic strata.

Erosion processes that lasted for million of years removed many layers from the sedimentary rock sequence creating the so-known Great Unconformity (also discovered by Powell in 1869).  An unconformity is a surface in the stratigraphic column that represents a time where no formations are preserved. This mysterious gap has puzzled geologists since its original discovery. The gap spatially varies ranging between 250 to 1200 million years in the canyon. This practically means that in some locations more than 1 billion years of geological history has been removed.

Barra Peak, the lead author of the study and a graduate student in geological sciences at CU Boulder, completed a journey through the Grand Canyon earlier in 2021. She noted that the gap is evident in certain locations. “At the bottom, you can see very clearly that there are rocks that have been pushed together. Their layers are vertical. Then there’s a cutoff, and above that you have these beautiful horizontal layers that form the buttes and peaks that you associate with the Grand Canyon,” she stated.

The research team retrieved samples from key locations in the canyon and implemented a technique known as thermochronology which refers to "the study of dating the cooling of rocks through exhumation". This method can detect the heating patterns of rocks that are associated with the building pressure on top of them from overlying layers.

The findings of the study suggest that the Great Unconformity is a result of faulting displacements that occurred in the area during the massive breakup of the supercontinent Rodinia. The formations were rearranged and washed away into the ocean. Moreover, the study mentions that the characteristics of the unconformity may be even more complex than currently assumed. In particular, the team found out that the eastern and western parts of the Grand Canyon have undergone different acts of twisting and deforming at slightly different times and thus, the Great Unconformity was formed sequentially. “It’s not a single block with the same temperature history,” Peak concluded.

The study was published in the Journal Geology in August 2021. 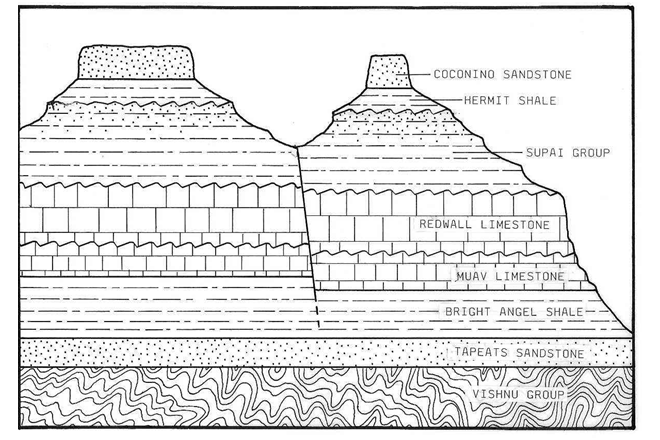 According to a recent study, published in the Journal Proceedings of the National Academy of Science...

A massive rock boulder in Scotland may be part of the oldest rockfall ever found. The remains of ro...

A rockfall that occurred in Grand Canyon near a popular hiking trail revealed ancient fossil footpr...

Rock mechanics is part of the broader scientific field of geomechanics which refers to the scienc...

Rock mass is a matrix consisting of rock material and rock discontinuities. Its characterization...

Researchers at the University of Utah have recreated the landslide that formed the Zion Canyon valle...

Tunnels in rock-masses are usually constructed by the bored tunnel technique. Both the conventiona...

Researchers at UC Santa Cruz found that bigger and more distant earthquakes can occur when injecting...