A rockfall that occurred in Grand Canyon near a popular hiking trail revealed ancient fossil footprints.

The rockfall occurred in the Manakacha formation which was formed when the Earth used to be a massive continent known as Pangaea. It is comprised of sandstones, sandy limestones and mudstones.

Among the rock fragments, scientists identified a rock boulder οn which ancient animal footprints were revealed.

Fossil footprints have been detected before in Grand Canyon, however, the new findings are the oldest footprints ever discovered since they date back to 313 million years ago.

A paper on the insights of the new discovery was recently published in PLOS One Journal.

Scientists identified 28 footprints on what used to be a sand deposit before it was solidified. Similar fossil footprints have been detected in coal beds but never in sand dunes. "You could always learn more, and we certainly would like to find more tracks of those same animals," Steve Rowland, lead author of the study and Professor Emeritus of Geology at the University of Nevada, Las Vegas (UNLV), stated.

The team that published the current study suggests that there are 2 separate animals that passed over the sand dunes and left their trails. However, there are a lot of uncertainties concerning the characteristics of those animals. "Some of the conclusions likely are going to be controversial. There's a lot of disagreement in the scientific community about interpreting tracks, interpreting the age of rocks, especially interpreting what kind of animal made these tracks," Prof. Rowland, added.

Scientists also identified a way of animal walking that was not detected before in early animals. This gait involves moving both legs from each side simultaneously and is known as lateral-sequence walk.

Regarding the future of the valuable rock boulder, Prof. Rowland and the National Park Service are collaborating to figure out a solution. Many similar rocks have been transferred to museums so they can be protected. However, the current boulder is massive and weights many tons, therefore, it cannot be readily removed.

Nevertheless, it should not be left in the field as it is vulnerable to erosion, weathering, or even human-induced vandalism, according to Prof. Rowland. Thus, a scheme to put it in a protected environment is underway.

The rockfall did not occur recently. According to US National Park Service, the discovery was initially made by Allan Krill, a visiting Professor of Geology at the UNLV from Norway, who was in the nearby hiking route during an expedition in 2016. 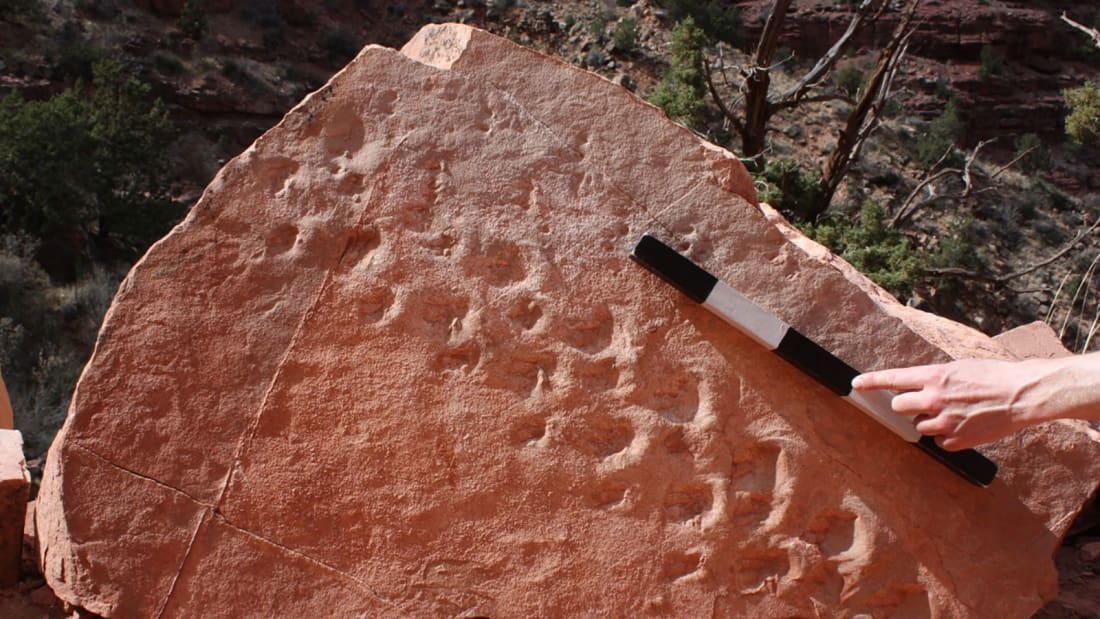 A massive rock boulder in Scotland may be part of the oldest rockfall ever found. The remains of ro...

A new study comes to shed light on a long-lasting mystery about the geology of the Grand Canyon. Th...

How much sand do we have left? New transport equations for carbonate deposits

Colorado Highway 145 is closed "indefinitely" after being hit by two huge rock blocks. The inciden...

Rock mechanics is part of the broader scientific field of geomechanics which refers to the scienc...

A huge rockfall caused by blasting works closed a highway located near Boulder, Colorado. The rocks...

Wedding Cake Rock Will Collapse At Any Time

Scientists have recently revealed that the famous rock of Australia that became popular spot for sel...

A huge rockfall in Cornwall, U.K., was caught on camera by a woman. The cliff collapsed and fell...

Researchers at UC Santa Cruz found that bigger and more distant earthquakes can occur when injecting...