In this latest minor release for PLAXIS 2D, PLAXIS 3D and Monopile Designer Bentley Systems introduced the discontinuity element in PLAXIS 3D, improved scripting support, did some CAD import improvements and improved troubleshooting when working with Design Approaches. The sections below will highlight the notable changes and advantages that these releases will bring to our users.

Release compatibility when upgrading from V21

Since PLAXIS V22 Update 1 also contains the new data structure of the material database and the more flexible and more robust way of handling project units introduced in the previous release, similar precautions apply with respect to V21 release compatibility. PLAXIS V22 Update 1 will be installed alongside PLAXIS V21, instead of overwriting it. Calculated V21 projects opened with this latest release will automatically be saved as a converted copy with the _converted suffix. After the conversion, remeshing and recalculation are required. In this case, the original V21 project will remain unchanged. For V21 projects that only have their geometry and/or some material sets defined and may be either meshed or not, these projects will be opened by V22 Update 1 without converting to a saved copy. The original V21 project would be overwritten upon saving.

The known issue that caused the assignment of the material factor labels to the material models parameters to be lost, when a V21 project containing Design Approaches is opened with V22 is now fixed in the latest release. Read more about this issue here.

Note that these converted projects are stored in the file format for PLAXIS V22 Update 1, this means that earlier versions of PLAXIS will not be able to open the converted project files. To continue using V21, users can just open the original V21 project.

Rock is not a homogeneous material: the presence of faults, fractures, joints, and weakness planes influence the mechanical behaviour, often more than the properties of the rock material itself.

In PLAXIS, constitutive models such as Jointed Rock and Hoek-Brown capture the behavior of small, smeared discontinuities, while the larger explicit discontinuities have traditionally been modeled through Interface elements. The new Discontinuity element, initially introduced for PLAXIS 2D in Version 22, enables a simpler modeling workflow. This element is now also made available for PLAXIS 3D in V22 Update 1.

Discontinuity elements simulate the localized effects of discontinuities in rock, including opening/closing and sliding. Discontinuities decouple the nodes in the mesh, enabling the relative displacement between the two faces of the opening, which are linked by a set of independent springs for which normal (kn) and shear (ks) stiffnesses can be specified. The mechanical properties of Discontinuities are defined through their own material sets, instead of depending on the surrounding material, which makes them easier to use and to port from project to project.

In PLAXIS 2D, geometry from CAD files is typically imported the same way as it is defined in the CAD file. This means that polylines, whether closed or open, will normally be imported as polylines and lines as lines etc. However, in CAD drawings the closed polylines usually represent soil/rock clusters or structures like quay walls etc. and users will expect these to be recognized by PLAXIS as soil/rock/structure polygons. This goes very well when users assigned so called Regions or Boundaries to their CAD drawing before exporting it from their drawing tool.
However not every software, for example Leapfrog, supports the creation of Regions or Boundaries, therefore importing CAD drawings that contain closed polylines into PLAXIS 2D would sometimes require the user to manually trace the imported polylines to create polygons.

In this latest release the interoperability with CAD packages becomes much easier and more robust better by introducing the "Import closed polylines as polygons" option in the import window. When activating this option in the import window, the GUI will show all the polygons that will be created and once accepted, the only thing left to do for the user is to assign the materials to the automatically created soil/rock polygons.

When editing soil materials in the Materials window, the side panel will now give warnings and errors about potentially invalid parameter combinations when combined with a created Design Approach and its applied material factors. In addition, the validate

The pre-calculation checks have also been improved and now give a better indication of the phase, material and the Design Approach that cause an invalid material set that blocks the calculation. This information is also available through scripting (validate and checkcalculationconditions) allowing users to ensure their applied Design Approaches are valid when generating models through scripts, before launching the calculation.
Command for Cross-section results

In this release, we fixed some critical issues from PLAXIS CONNECT Edition Version 22.00:

Design of foundations for offshore wind requires thousands of calculations. To truly optimize foundation design throughout the entire wind farm, engineers need to run more analyses in less time. In this context, automation is not a nice-to-have, but a necessity. The new Python scripting API for PLAXIS Monopile Designer enables these automated workflows. You can now write your automation scripts, calling on PLAXIS Monopile Designer, PLAXIS 3D, and/or OpenWindPower through their respective APIs, all using the same scripting language.

We're delivering with PLAXIS LE CONNECT Edition V21 Update 5 a collection of improvements based on your feedback. Visit Bentley Communities to catch up on the latest PLAXIS LE changes.

Users are continuing to take advantage of the PLAXIS LE Slope Stability Solver API to build additional automation into the limit equilibrium components of their workflow.

Don't wait with upgrading from PLAXIS V21 and enjoy these new features as well:

When upgrading to V22 Update 1, users will also benefit from all the major functionality introduced in the previous V22 major release, which are summarized below. Refer to our previous release blog for more details about those features. 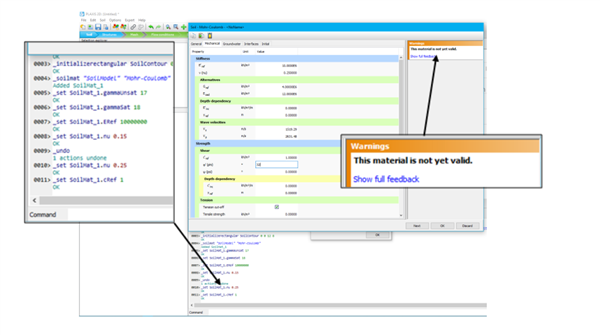 A major overhaul of the data structure of the material database brings the user better command line support, a side-panel warning and error system and richer editing experience. When editing or inputting any of the material model parameters in the GUI, the PLAXIS software will now issue individual commands. This gives users traceability and leads to an easier understanding of the command structure and objects names when considering automation using e.g., Python scripting.

For more information on some of these changes, see:

Creep is a common feature that occurs in rocks, for example rock salt. Creep becomes a key factor on deformation and stress redistribution when considering the timescale of deep underground structures, like gas caverns or radioactive waste disposal sites that are designed to last hundreds of years. The pre-existing N2PC model based on Norton’s model for steady state creep has been extended with a Mohr-Coulomb and Tension cut-off failure surface (hence MCT). This extension allows the model to now not only perform accurate deformation analysis but also failure analysis, considering the time dependent behavior of rocks at time scales spanning ten to hundreds of years.

For more info and background, see UDSM: N2PC-Salt and N2PC-MCT. 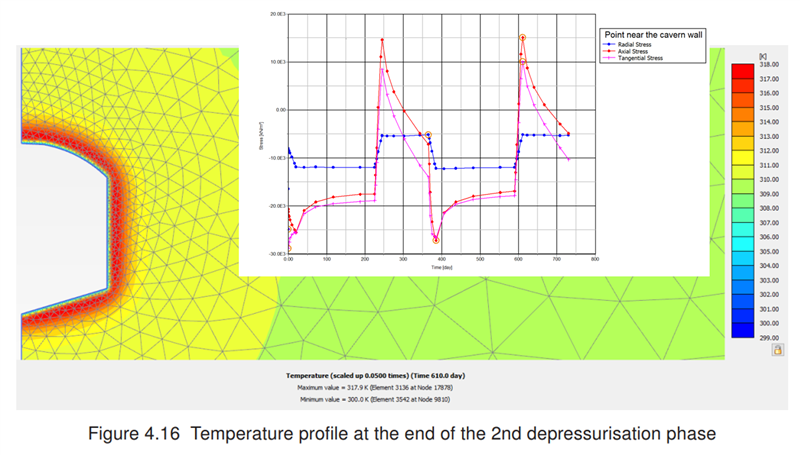 In today's complex and multidisciplinary infrastructure projects there is a growing need to shorten the iterative process between geotechnical and structural analysis teams and re-use readily available model data, rather than rely on the exchange of some linear and uncoupled spring values between these teams. With Soil-structure interaction analysis using super-elements, PLAXIS can smoothly connect the many structural analysis load cases with the geotechnical analysis model at the soil-structure interface.

From V22 onward, PLAXIS 3D directly deals with triangulated surface and sub-surface topography again, through the introduction of *.OBJ and *.STL import. The intermediate conversion step is eliminated which makes it easier for users to import triangulated surfaces coming from applications like MicroStation, PLAXIS Designer, or Leapfrog, while at the same time keeping the original details of the surface.

Users will now also get more informative messages when trying to import files into PLAXIS, hinting at probable causes and solutions for these errors available through side panel warnings and an import log in the import dialog window. Full log details will also be useful for the support department when aiding users with geometry import issues.
So, update to our latest editions to benefit from these new features and software improvements using either the CONNECTION Client or by downloading the software yourself today!

PLAXIS V22 brings a major overhaul to the data structure of the material database and a more flexib...

With the latest release of PLAXIS 2D, PLAXIS 3D, and PLAXIS Monopile Designer, Bentley continues to...

With the introduction of the PLAXIS CONNECT Edition V21, SOILVISION products are adopting the PLAXI...

PLAXIS 2D/3D WorkSuite is the most comprehensive option of PLAXIS which includes PLAXIS 2D/3D Ultim...

Importing geometric and stratigraphic data to PLAXIS 3D Any infrastructure project begins with a t...

Bentley is happy to announce the release of the new PLAXIS V21 offering new features and PLAXIS con...