A cliff collapse that occurred in England's Jurassic Coast is considered to be the largest to hit the region in 60 years.

The landslide struck in mid-April near Weymouth, a town located in Dorset County on the Jurassic Coast. The Jurassic Coast stretches for more than 150 kilometers in southern England and is characterized by its unique rock formations that cover 3 geological periods (Cretaceous, Triassic and Jurassic). Fossil remains have been found from different areas. Due to its importance, the Jurassic Coast has been declared as a World Heritage Site since 2001.

Landslides at the Jurassic Coast occur due to erosion and weathering processes that are accelerated in coastal regions. As a result, cliff collapses are usual. “Wind, waves and weather all act on the cliffs, which can fall and slip without warning. So stay safe – keep away from the tops or bases of the cliffs and stay off slip material on the beach,” Dorset council tweeted occasioned by the current failure.

The collapse struck in a sandstone cliff and its failure mechanism resembles a rotational slump. Slumps occur along a circular or near-circular failure surface that rotates around an axis parallel to the slope. They are associated with shear failure of the material or movement along a layer of higher strength. Officials stated that about 4.000 tons of material gave way and have been deposited downwards with 300 meters of the cliff being impacted. Fortunately, there were no victims as the failure occurred over the night and no one was at the beach.

The area had recently experienced mixed weather conditions but geologists believe the failure was entirely associated with the erosion processes that take place and deteriorate the stability of the slope.

The cliff was found to be prone to further landsliding with subsequent (smaller) failures occurring. A team of experts visited the site to evaluate the conditions and decide about further actions. The area is being currently monitored with officials focusing on new cracks that emerged on the cliff after the collapse.

According to reports, there is a substantial crack on the west side of the cliff that will probably trigger new collapses in the future. A roadway running across the coastline was re-routed and people were advised to avoid coming close to the cliff.

In August 2020, a cliff collapsed in the central part of the Jurassic Coast as a result of both erosion processes and heavy rainfalls. That failure was smaller than the current one (about 9,000 tons of debris) but it occurred in a hazardous area visited daily by people. Fortunately, no one was swept away by the debris. Later that year, another rockfall struck near the area of the current incident.

Click below to watch a video and some stunning photographs retrieved from the site of the cliff collapse. 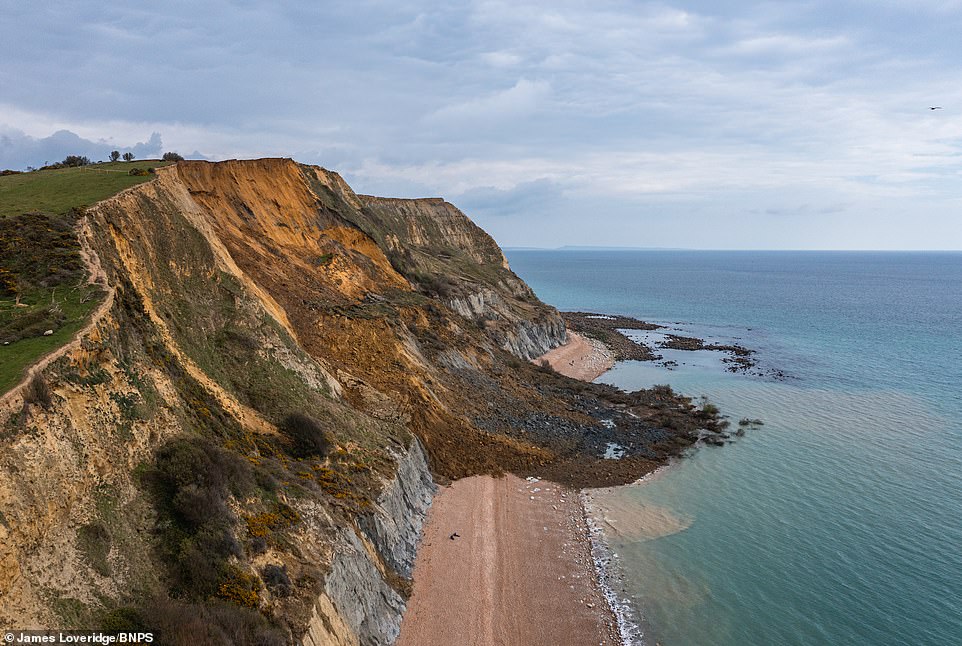 Thick cracks that emerged on the top of a cliff in South England indicate a potential cliff collaps...

Authorities urged people to stay away from cliffs in Jurassic Coast, UK, after a rockfall occurred...

Eight people were rescued after a cliff suddenly collapsed in Isle of Wight, England. The incident...

Path to iconic lighthouse swept away by cliff collapse in England

A public path leading to an iconic lighthouse located in England has been cut off by a cliff collap...

Stunning cliff collapse in the Canary Islands caught on video

A stunning cliff collapse that occurred in the Canary Islands, an autonomous community of Spain sit...

Three women were killed after a sandstone bluff collapsed at Encinitas beach, located north of San...

A landslide carried away a cemetery situated at the edge of a cliff in northern Italy. The incident...

A massive landslide struck the coastal region of Trimingham, a village located in North Norfolk, UK...