For rigid foundations, the analytical solutions of the elastic half-space approach are presented. A linear stress distribution is assumed, thus, whether the soil substratum is cohesive or cohesionless is not taken into consideration.

The modulus of  subgrade reaction or static stiffness K is a function of the following:

Apart from the vertical static stiffness of the ground, the horizontal, rotational and torsional stiffness coefficients can also be determined.

In the following paragraphs, the foundation is considered rigid, therefore, its stiffness is assumed to be much greater than the stiffness of the subsoil.

To account for the effect of foundation dimensions on the static stiffness of the system, an arbitrarily shaped foundation must be deduced to a rectangle shape with its length (2L) being greater than its width (2B). This modification can be made using a simple assumption as depicted in Figure 2. The static stiffness for a generally shaped foundation that has been translated into a rectangular (2B,2L), as well as the corresponding stiffnesses for the idealized case of a square foundation, are presented in Table 2 (Gazetas, 1983).

Table 2: Static stiffness of the substratum for a square and an arbitrarily shaped foundation on a homogenous, isotropic, elastic half-space. 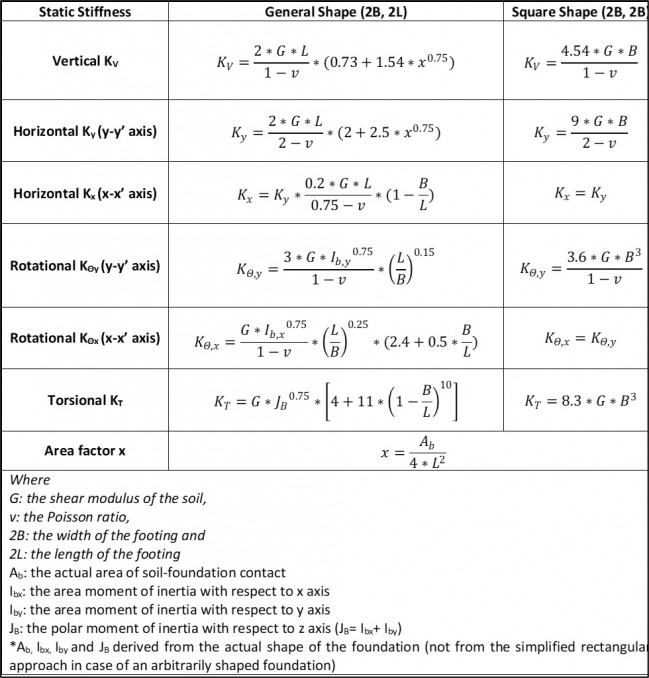 Apart from for the elastic parameters of the substratum (ex., G,v), another parameter that plays an important role on the static stiffness of the soil-foundation system is the thickness of the soil layer, assuming that a rigid rock lies beneath it (Figure 3).

In fact, a thicker soil layer (with respect to the dimensions of the foundation) results in reduced stiffness in comparison to a thinner layer. The equations that take into consideration the soil layer thickness for circular and strip foundation systems are illustrated in Table 3 (Gazetas, 1983).

Table 3: Static stiffness of the substratum-foundation system, for circular and strip foundations on a homogenous, isotropic elastic half-space considering the soil layer thickness.

The elastic properties of the subsoil are often considered constant in geotechnical engineering practice, as laboratory and in-situ testing cannot always be conducted on samples/soils at different depths.

G0: shear modulus of the soil at the surface of the ground

B: half of the foundation’s width (2B for strip foundations or 2R for circular foundations)

z: depth from the ground surface

Accordingly, the static stiffness of the soil-foundation system, for circular and strip foundations, taking into consideration the shear modulus increase with depth can be derived using the equations presented in Table 4 (Gazetas, 1983).

Assume that a circular footing with a radius of 5 m is founded on a soil layer that is represented by an elastic half-space with a modulus of elasticity E=60 MPa and Poisson ratio v=0.30.

The shear modulus, thus, is derived as:

Given the applied loads from the superstructure (Figure 4) , the resulting vertical and horizontal displacements as well as the torsional rotation of the footing can be derived using the equations shown in Table 1.

In this example, the following load values are assumed:

The vertical, horizontal and rotational static stiffness of the system is derived as:

Therefore, the displacements and the rotation of the footing are calculated as: