A slow-moving landslide that is associated with permafrost deterioration has caused some major issues in Alaska's Denali National Park and Preserve.

Denali National Park is located north of Anchorage and is one of the largest parks in the United States occupying an area of more than 24.200km2. The Park features great attractions including the higher peak in North America (Mount Denali) lying at about 6.100 meters.

Near the park road, a slow-moving slide known as the Pretty Rocks Landslide exists. The ground instability comprises one of the 140 mapped unstable slopes in the park and has been thoroughly monitored by the U.S. National Park Service (NPS) in recent years. The landslide is associated with permafrost thaw and hence, it is better to be described as a rock glacier. During the past 6 decades, the permafrost below the surface of the ground has deteriorated making the ground above weaker and the slope unstable. The slide initially moved progressively at slow rates which scientists did not perceive to be threatening. In fact, 10 years ago, scientists suggested that there were more concerning issues in the park than this slow-moving slide.

However, about 5-6 years ago, the facts changed as the landslide started to progress exponentially and move centimeters downwards on a daily basis. During the past 2 years, debris accumulation has caused several issues to the park's main road. This summer, the conditions were even worse as the road has also begun to deform at a rate of about 40 centimeters per day (see the image above). "It gets so steep that the buses have literally dragged their bumpers through there,” Denny Capps, a geologist working with the Denali National Park, stated. As a temporary solution, authorities dropped tons of gravel on the landslide mass in an effort to reduce its velocity. This method involves placing a heavy load on the toe of the failure surface to increase the forces that stabilize the landslide mass. Nevertheless, the technique proved to be inadequate as the velocity of the moving ground increased and officials had to evacuate and close the road. This was an unfortunate turn of events for the short-term prosperity of the park and local economy as hundreds of hotel reservations were canceled.

Park officials suggest that this event could prematurely bring the tourist season to an end and blame climate change that causes the permafrost to thaw and the ground to become unstable. "Changing climate is driving frozen ground to thaw, resulting in unpredictable and increasing landslide movement rates at Pretty Rocks that are unprecedented in the history of the park road,” Don Striker, Denali’s Superintendent, stated.

But how is permafrost associated with landsliding? Freezing increases the shear strength of the ground as the molecules of ice act as a binder between soil particles. Frozen ground has high strength and can be found stable even in inclined slopes. Moreover, erosion processes occur far more gradually as ice preserves the soil material. When permafrost thaws, the soil's strength is reduced leading to slope instabilities and eventually to landslides. Park's officials made clear that it is unattainable to tackle the current situation. “We cannot safely keep up with the accelerating rate of landslide movement caused by permafrost thaw currently occurring in association with the Pretty Rocks Landslide.” 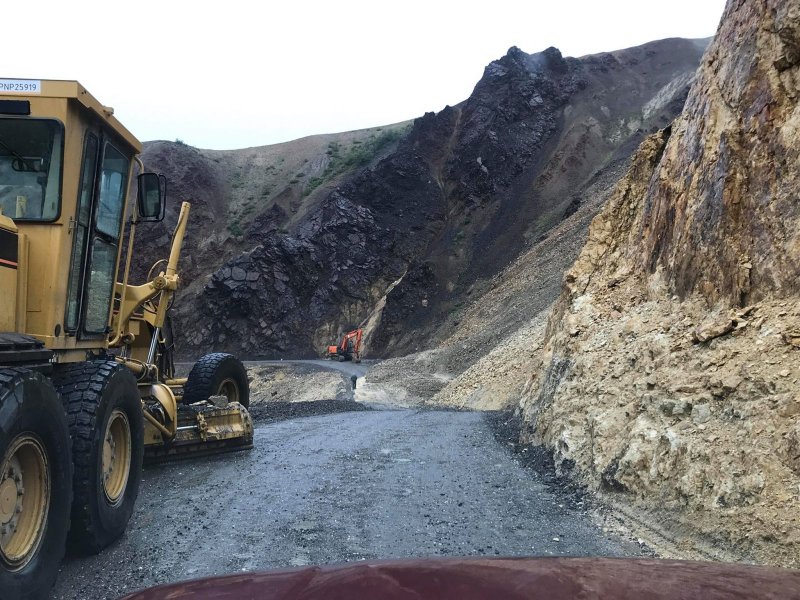 Over the years, Alaska receives increased precipitation, a fact that will lead to its permafrost th...

Numerous landslides have been recorded in Haiti after a M7.2 earthquake struck in August 2021. The...

A rockslide in Zion National Park, located in southwestern Utah near the city of Springdale, has cau...

A little girl died and 4 members of her family were injured after a rockfall was triggered in Glaci...