At least 13 people have been reported dead after 2 major landslides struck in Indonesia.

The ground failures occurred on January 10, 2020, close to a village that is located in West Java province. The landslides were triggered after heavy rainfalls struck the region during the past days.

Rainfall-induced landslides are common in Indonesia where high rates of precipitation are observed especially in January and February. In addition, a great proportion of the country's population lives in landslide-prone areas near fertile fields. Therefore, the impact of landsliding can be devastating.

The slides did not occur simultaneously. The first landslide swept away houses while people were trapped under the debris. Rescue teams arrived at the scene and initiated a search and rescue operation. During that operation, the second landslide struck impacting both locals and the rescue teams. "The subsequent landslide occurred while officers were still evacuating victims around the first landslide area," Raditya Jati, spokesman for the National Disaster Mitigation Agency, stated.

Except for residences, the landslides caused severe damage to a local road and a bridge.

The rescue efforts were resumed with military and police personnel joining the operations. According to recent reports, 13 people have lost their lives, many were injured while 26 more are considered missing. 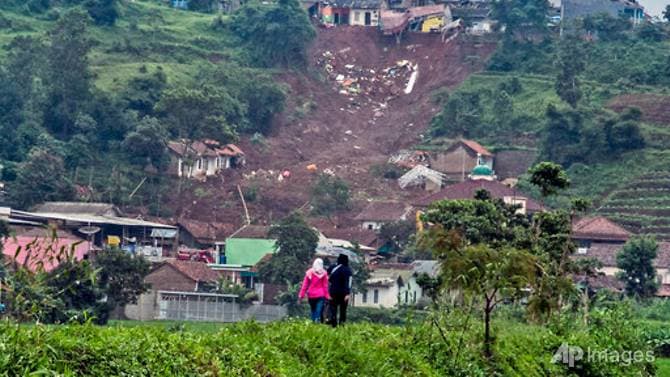 According to the National Disaster Mitigation Agency (BNPB), 17% of Indonesia's population, this bei...