Numerous landslides have been recorded in Haiti after a M7.2 earthquake struck in August 2021.

The M 7.2 earthquake struck Haiti on August 14, 2021, at 8:29 am local time causing massive infrastructure damage and more than 1,900 fatalities. The United States Geological Survey reported that more than 1 million people experienced very strong to severe shaking. More on the impact of the seismic shock can be found here.

On the same day of the quake, NASA collected imagery from Landsat 8, a satellite that completes one orbit of the Earth every 99 minutes. The data showed the completely altered landscape of the Pic Macaya National Park in southwestern Haiti which was devastated by landslide incidents (see the figure below). As a comparison, an image of the mountaintops on January 2021 is also provided.

According to Robert Emberson, a landslide researcher at NASA’s Goddard Space Flight Center, hundreds of landslides have struck the Park in an area covering 100-200 km2 which is only a small portion of the total region that may have been affected. Nonetheless, cloud cover has prevented the collection of adequate satellite imagery and the total impact of landsliding will be subsequently assessed. Emerson suggests that the National Park is prone to such phenomena mostly due to its steep slopes (more than 50°).

Additional ground failures occurred in the region as a result of tropical depression Grace. Emberson suggested that much of the mobilized ground could have been carried away and progress as debris flows. 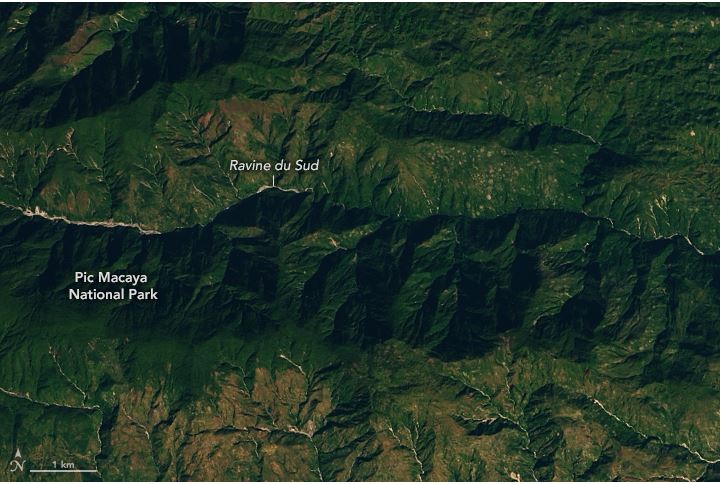 NASA is currently mapping the landslides that were triggered during the passage of Hurricane Eta th...

Nearly 2,000 people have been reported dead after a M 7.2 earthquake hit Haiti. The seismic shock s...

Geoengineer.org is pleased to launch a video with a selection of the most captivating news that wer...