A vast landslide that occurred on April 22, is considered to be the second largest to ever hit northern Quebec in Canada.

The ground failure took place near the Great Whale River, about 8 kilometers upstream from 2 villages located approximately 1,700 kilometers north of Montreal. The size of the slide was immense covering an area with a total length of 1800 meters and a width of 500 meters. It is estimated that more than 45 million cubic meters were deposited in the river.

At the location of the landslide, the river is still frozen, hence a vast proportion of the debris still lies on top of the ice. The debris will be gradually accumulated within the river flow once the ice melts.

Some believe that the incident consisted of a major landslide that was followed by subsequent, smaller ones. Others stated that the secondary deformations derived from the same landslide that was re-triggered. Reportedly, the landslide occurred in clay soils which are vulnerable to the weather conditions and the presence of water. According to Michel Allard, a geologist form Laval University, snow melting in spring increases the pore-water pressures within the clayey soils near the riverbank and enables such failures. More information of the landslide type and mechanism will emerge after experts will visit the site (probably in May, 2021) to assess the conditions.

The incident took place in a remote area and, thus, no people were affected. It was suggested that similar ground failures near the local municipalities are not probable to occur since the slopes are lower in terms of height and less steep.

Nevertheless, local authorities were concerned about potential ramifications of the debris deposition into the river. In particular, there was a threat of floods along the river. A local community is elevated approximately 10 meters above the water level of the river and authorities were warned about a potential water-level rise. Indeed, the water levels temporarily rose but not to a concerning extent and quickly returned to normal. Officials initiated a monitoring operation regarding the Great Whale River.

Nevertheless, the impact of the debris deposition to the river will cause some long-term effect. Even if floods did not occur, it will take months or even years before the river recovers its original course. Local authorities will create a restriction zone around the landslide to prevent people from entering a hazardous area. Subsequent failures are currently a potential threat for the site.

Parts of the Great Whale River are still frozed with officials suggesting that melting could be accelerated after the disturbance caused by the debris deposition. 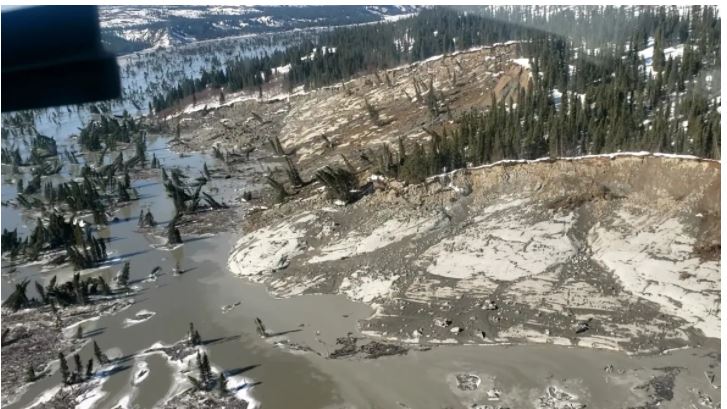