Bentley has recently applied a generalized Hoek and Brown (HB) model to simulate the behavior of brittle rocks in underground excavations.

The HB failure criterion has been widely utilized over the past decades as it assumes a non-linear correlation between the principal stresses at failure, a fact that is consistent when studying the response of brittle rocks. The criterion is empirical and is based on data obtained from laboratory tests.

However, the HB criterion itself does not account for a post-peak behavior section, therefore, many researchers have incorporated perfect plastic models or strain-softening models to simulate the mechanical response of brittle rocks after they reach the peak stress.

The current approach that Bentley implemented includes: a hyperbolic softening model to determine the post-peak behavior of brittle rocks, a plastic flow characterized by non-linear dilation and a viscous regularization approach. The yield model is proposed by a study made by Jiang in 2017 that can be found here.

The research's purpose was to conduct numerical analysis via PLAXIS 2D, in order to evaluate the performance of the selected yield criterion and to simulate failures characterized by shear bands.

The rockmass degradation is taken into consideration via a hyperbolic decrease of the material properties which are associated with the HB criterion mb and s. The non-linear dilation pattern was also simulated via a hyperbolic function for the parameters associated with the HB criterion. The viscous regularization method was utilized to solve a specific problem that emerged in numerical models when strain localization is studied.

A series of numerical biaxial tests was firstly conducted to derive the effect of the internal length (a temporal gradient that predicts the shear band thickness during the degradation process). The results showed that this internal length is mainly impacted by the fluidity parameter. The effect was repeatedly studied with a different discretization of the model. The findings suggest that the thickness of the shear band remains the same when the total number of elements is more than 5000.

The Finite Element 2D model takes into consideration the 3D rock-support interaction via the ground reaction curve and the support characteristic curve which practically predict the rockmass and support equilibrium taking into account the tunnel's advancement.

The performance of the new, sophisticated model was evaluated in tunnel excavation problems. Tunnels are underground structures that are gradually excavated in more difficult conditions as technology and computational tools improve. Thus, accurately predicting the behavior of brittle rocks is of high importance to derive the excavation method and the temporary and final support lining.

In particular, a tunnel in the Donkin-Morien coal mine located in Canada was studied to assess the performance of the model. The tunnel was excavated at depths that reached 200 meters below the seabed and was thoroughly monitored. As a result, there were a lot of data that could be used to compare the actual behavior of the rockmass-structure interaction with the numerical models. By comparing a cross-sectional area of the simulated and of the actual tunnel, it was deduced that the model accurately predicts displacements and the plastic modules despite underestimating the depth of the plastic zone.

The results of the study were recently published in the 54th U.S. Rock Mechanics/Geomechanics Symposium, ARMA 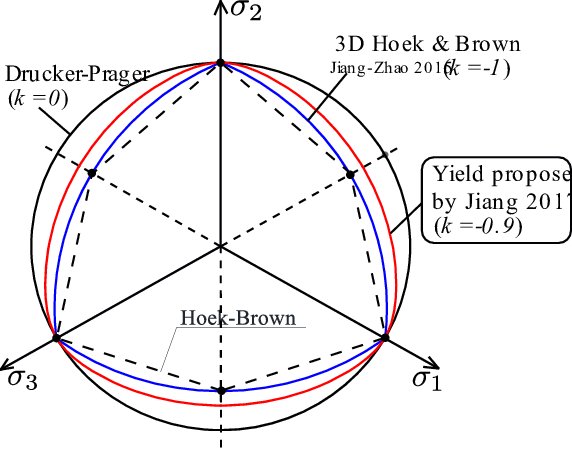 The following was prepared by Dr. Ronald B.J. Brinkgreve, and first presented by Virtuosity. Numeri...

PLAXIS: Introduction to the Jointed Rock Model for the Modeling of Soft Bedded Rock Formation

Rock masses are characterized by the existence of distributed joints. The mechanical properties of...

The following was prepared by Dr. Ronald B.J. Brinkgreve, and first presented by Virtuosity. In a p...

The complex relationship of stresses and strains for soils involved in the geotechnical projects a...

Rock at depth is subjected to stresses resulting from the weight of the overlying strata and from l...