In this paper, Linda Inêz Garcia Bessa and Gilson de F. N. Gitirana Jr. from Universidade Federal de Goiás in Brazil, as well as Bentley Systems Geotechnical Strategic Advisor Murray D. Fredlund deal with the failure of the Fundão Dam in Brazil. The failure has been described as the biggest environmental disaster in Brazil and the biggest in the world involving tailings dams. To date, studies of the failure use deterministic approaches, without considering uncertainties involved in the design. To account for parameter uncertainties and spatial variability inherent in the materials, Fredlund et al. undertake two-dimensional probabilistic analyses using Monte Carlo methods and a hybrid point estimation method. It was found that, under undrained conditions, the left section showed acceptable Factors of Safety, while the analyses indicated that the right hand shoulder had a higher probability of failure.

The work was recently presented at #GeoNiagara2021. You can watch the video of the full presentation in the Media Section below, while you can find the relevant conference paper in Bentley Communities.

History and Collapse of Fundão Dam

On November 5, 2015, the Fundão Dam, located at the Germano industrial site of the municipality of Mariana-MG, ruptured causing a rush of mud and mining tailings. The event caused 17 fatalities, more than 600 people became homeless, while severe environmental and socioeconomic damage to the entire Doce River Basin was generated.

In 2005, the Fundão valley was chosen as a new tailings disposal site. In 2009, piping or internal erosion was observed on the downstream slope, caused by excessive deposits of fine materials and serious flaws in the construction of the bottom drain and its filters. Repairs were not possible and therefore the drains were sealed. As a remediation measure, a drainage mat was built on the surface of the tailings, to replace the inoperative bottom drain. This drainage mat was intended to intercept the flow that could arise on the slope. However, the sands below this drain would remain saturated, as would most of the tailings upstream.

In late 2012, when the height of the tailings on the left shoulder had already exceeded the carrying capacity of the drains built in that region, it was decided to realign the dam on the left shoulder in order to allow the embankment to continue to rise. This realignment became known as "setback". Due to the retreat, the next year saw episodes of emergence, rutting and slipping at elevation 860 m. Cracks in the dam crest and saturation at the foot of the slope were observed later.

On the date of rupture, on November 5, 2015, several small earthquakes occurred. This seismic sequence may have been the trigger needed to initiate the rupture. A total of 32.6 million m³ of tailings were released with the rupture. The material flowed over the Santarém dam and reached Bento Rodrigues causing destruction of flora and fauna.

For the analyses performed in this paper, data were mostly taken from the public domain report prepared by the Research Panel (Morgenstern et Al., 2016). The report provides information on geometry and properties of the dam. Characteristic cross sections at the left and right abutments are shown in Figure 1. Regarding the material parameters, the effective friction angle and the effective cohesion are adopted in the effective stress analysis (ESA), while the undrained strength analysis (USA) uses the undrained strength ratio, for the material below the water level (Morgenstern et al., 2016) (Table 1).

To characterize uncertainty in soil properties, a survey of typical values for correlation coefficients (CV) and probability density functions (PDF) found in the literature was conducted during this study. The most commonly adopted PDFs were the Normal (N) and Lognormal (LN), with typical CV values shown in Table 2.

Table 2. Adopted coefficients of variation for the material parameters 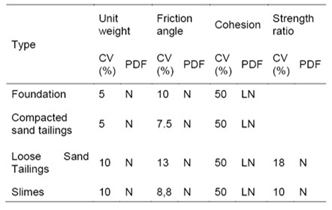 Another descriptive parameter of the variability of the materials considered was the spatial variability, quantified by the autocorrelation distance, i.e., the distance beyond which adjacent parameters become independent. The spatial variability was only defined with regards to the angle of friction, adopting mean values as shown in Table 3. The values adopted were 30.8m for autocorrelation distance in the horizontal and 1.98m in the vertical.

For the probabilistic analysis, the Monte Carlo (MC) and the Hybrid Point Estimation Method (APEM) were employed. In all probabilistic analysis, the critical slip surface search method involved a circular failure and searching for entry and exit points. To validate the model used, a comparison was made between the deterministic results obtained with the model of this study and the results published by the Research Panel (Morgenstern et al., 2016). The slope stability analyses of this study were performed using the SVSLOPE program (SoilVision Systems Ltd., 2018). Based on the results of these analyses (Figure 2), it was shown that the developed model adequately reproduces the findings of the Morgenstern et al. (2016), with a percentage difference of about 5-7% in the computed Factor of Safety (FS) values for the AA and 01 sections. 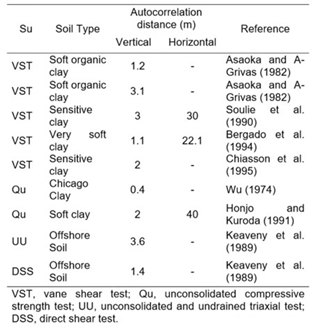 When evaluating the estimated Factor of Safety (E[FS]) values based on drainage conditions, the analyses performed under drained conditions have E[FS] values that are 70% higher than the values under undrained conditions (Figures 2 through 4). The importance of the spatial variability seems to be high only in the case of drained conditions. The results of the sensitivity analyses show that the parameters that mostly contributed to the uncertainty of the dam performance were those of the materials whose rupture sections pass through them.

To recover the left shoulder a setback was constructed and the initial design was modified. Thus, clayey tailings occupied places not initially programmed, making drainage difficult. Based on the aforementioned findings, this caused localized ruptures, which were possibly aggravated by a trigger mechanism, i.e., a tremor, which initiated the liquefaction process and thus the fluid slide.

Based on the 2D probabilistic analyses conducted as part of this study, it was found that the left section (01) of the Fundão Dam showed acceptable Factors of Safety, under undrained conditions. However, the analyses pointed out that the right shoulder (AA) had a higher probability of failure, under undrained conditions. Thus, the range of risk conditions highlights the importance of measures to control drainage in the structure. The findings of the work could be briefly summarized as follows:

Critical Failure Surface As discussed in the previous chapters of the Geoengineer.org series on Slo...

When is 2D slope stability analysis sufficient and when should 3D analysis be used in conjunction w...

Reasons Why You Should Consider Probabilistic Analysis with Spatial Variability

One of many challenges to open pit and underground mine designs is the high variability of weak roc...

Slope Stability of Embankments on Clay

The construction of an embankment on clay can generate excess pore pressure in the clay, causing sl...

Developing Safe Mine Re-Entry Plans Using RS2 It would be a perfect world if slope failure didn’t...