A major highway in India was closed due to a large rockslide.

The landslide struck on Saturday, September 5, 2020, and impacted the Chandigarh-Manali highway situated near Dwada in the Indian Mandi district.

Click the video in the Media Section below to watch the stunning footage capturing the entire duration of the ground failure. Based on this footage, it is assumed that the type of landsliding is complex since it has both a planar failure and a shear failure component. A discontinuity subparallel to the slope has contributed to the incident.

Planar failures occur when a formation slides on a weak plane which is usually a discontinuity surface. The stability of the ground depends on the shear strength of this weak plane and if the stress exceeds this value, a rockslide can occur. A tensile crack that forms on the crown of a potential landslide contributes to its instability.

On the contrary, shear failure takes place when the shear strength of the formation is exceeded and is not associated with pre-existing discontinuities but with the mechanical properties of the intact soil or rock mass.

Intense rainfalls that struck the region the previous days may have been the triggering factor for the rockslide. The presence of water tends to destabilize the ground formations by building pore-water pressure that decreases the shear strength of both the rock mass and the discontinuity plane. "....the possibility of more landslides are there due to continuous rain during past few days the land and rocks have become fragile and erosion of land continues in the region,” Shalini Agnihotri, superintendent of police, stated.

The Chandigarh-Manali highway was closed as debris covered a large part of it. Fortunately, there have been no reports about victims or vehicles damaged.

Nevertheless, the traffic was discontinued and numerous people got stuck on both sides of the road. Many of them decided to go back on foot.

Authorities tried to conduct a removal operation so that the road would be operational again but, additional rockslides occurred and posed a threat to the staff. “Boulders are continuously falling on the road. Clearance will be started once the landslide stops,” Shalini Agnihotri, mentioned.

The rockslide is currently being monitored as the traffic has been diverted via another roadway. Officials mentioned that debris would have been removed as of Sunday, September 6, 2020. 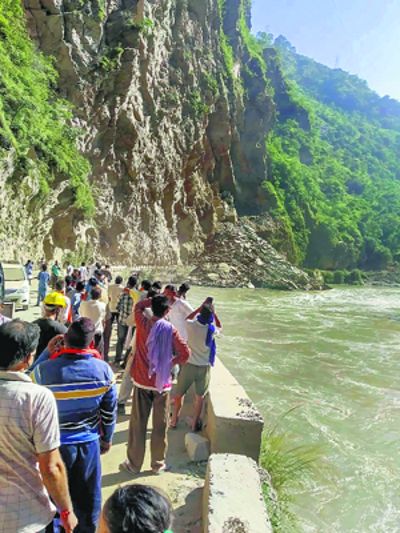 Chandigarh-Manali highway blocked following a landslide in Mandi
The Tribune

The triggering factors of massive, pre-historic rockslides that occurred in the Alps have finally b...

A massive rockslide occurred on December 7, 2015 in Hanogi in Mandi district of  Himachal, India.  ...

A multistory building was carried away by a landslide in India The incident occurred on September 3...