A significant step has been made for the completion of a great railway project in Europe.

The Ceneri Base Tunnel (CBT), a twin-tube tunnel that passes under Monte Ceneri, was completed on September 4, 2020.

The total length of the tunnel is about 40 kilometers and stretches between Vigana and Vezia in Switzerland. Passenger trains will cross it within a 20-minute route.

The tunnel is the final section of the $25.04-billion New Railway Link through the Alps (NRLA) project which links the Swiss Alps through a network of tunnels and is considered the “Switzerland’s construction project of the century”.

Along with two more tunnels, the Gotthard Base Tunnel which stretches for 57.1 kilometers and is currently the longest train tunnel in the world and the 34.6-kilometer Loetschberg tunnel, the completed project creates a route that will eventually connect Rotterdam in the Netherlands with Genoa in northern Italy. Future plans suggest that the route will further expand to connect the North Sea with the Mediterranean.

According to officials, the regional rail lines will also be upgraded so that faster traveling would be enabled.

The endeavor aims at shifting cargo transport from roads to railways as heavy trucks have a negative impact on the Alpine landscape and also are responsible for high carbon emissions. Currently, around 900,000 trucks cross the Alps annually and the project’s purpose is to reduce them at about 650,000. If successful, the total CO2 emissions will be reduced by 890 tons per day.

The tunnel was excavated using a Tunnel Boring Machine (TBM) handled by Robbins Company. The 9.7-meter boring machine was equipped with 483mm cutters and advanced at an average rate of 18.5 meters per day.

The excavated rocks comprised of Swiss molasse, Ceneri orthogneiss and schists with a uniaxial compressive strength between 30 and 130 MPa. The conditions of boring were good since no significant convergence or intense water inflows occurred. Depending on the rock masses encountered, the temporary support of the tunnel included shotcrete, ring beams or rock bolts. 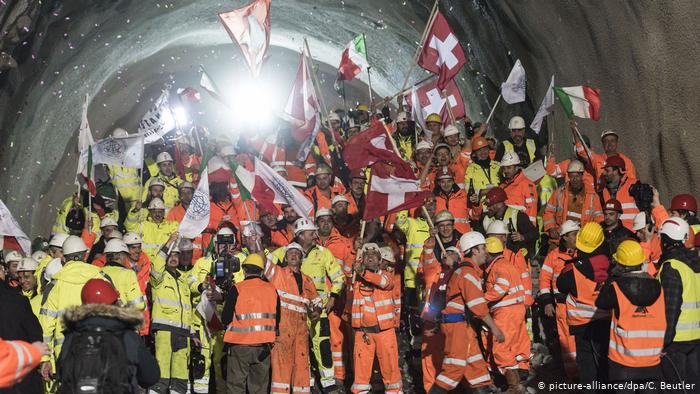