At least 32 people were reported dead and numerous have been evacuated due to a volcanic eruption in the Democratic Republic of Congo.

Mount Nyiragongo is an active stratovolcano situated in the east Democratic Republic of Congo near the border with Rwanda, at an elevation of about 3.5 kilometers. According to NASA, the eruptions of Mount Nyiragongo are extremely hazardous due to the low viscosity of lava that enables rapid flows. They have proved to be both spectacular and, unfortunately, deadly.

The volcano erupted on May 22, 2021, sending lava flows towards inhabited areas near the city of Goma which accommodates nearly 700,000 people (with non-governmental organizations stating that the actual population is more than 1 million). The eruption initiated at 18:00 local time and persisted until early May 23 when it slowed down. According to Honore Chiraba, a volcanologist from the Goma Volcano Observatory, the blast was caused by two main fractures on one side of Mount Nyiragongo.

The lava flows propagated and reached just 1.2 kilometers away from Goma. Lava destroyed about 3000 houses, many buildings including schools and hospitals, caused power outages and impacted roadways in villages and in the vicinity of Goma. The victims included 9 people involved in car accidents when trying to escape, 4 people who were imprisoned and tried to escape, and 2 who died due to burns.

Many people from Goma and the surrounding areas evacuated their residences with more than 8,000 crossing the border to Rwanda in search of safe refuge. Reports suggest that not all of them could reach Rwanda as the border was closed and many went north to find shelter. Moreover, numerous children have been separated from their facilities amid the chaos during the evacuation and were considered missing.

Unfortunately, scientists cannot rule out the possibility of another eruption in the following days. Authorities suggest that it is not yet safe for people to return to their homes.

The last eruption of Mount Nyiragongo occurred in 2002 when 100 people died due to poisonous gases and lava flows. The blast sent plumes of smoke to the atmosphere and lava emerged from 3 sides of the volcano. 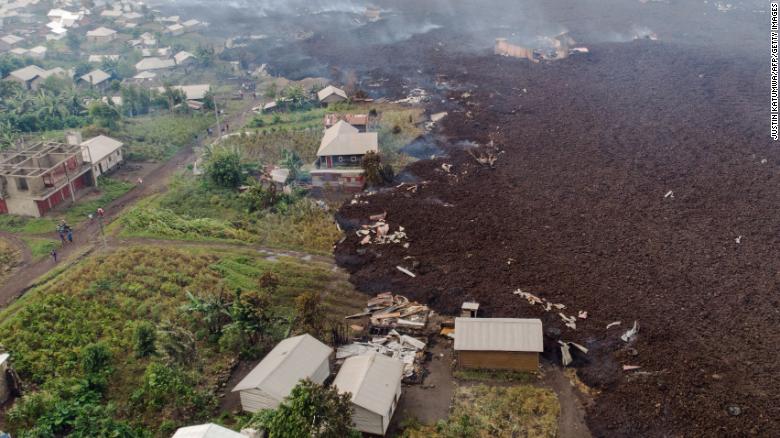