Silvertown tunnel, a project that will potentially be the first in 3 decades to connect the two sides of London via the Thames, has become a matter of dispute due to its environmental impact.

The Silvertown tunnel is a 4-lanes underground structure that will pass beneath the river Thames in east London and connect Silvertown and Greenwich Peninsula. It was granted permission in 2018 and is currently underway with its completion being scheduled for 2025. The developers of the facility suggest that the population and the traffic in this area of the city will increase in the future thus, the construction of the tunnel will offer a reliable passage for transportation. In particular, the tunnel will decrease congestion offering an alternative route, reduce travel times, offer job opportunities and potentially benefit the real estate market in the surrounding region.

The construction of the tunnel is considered an expensive endeavor with its cost expected to reach about $1.38 billion. This amount will be amortized via user charges that will also cover the operational and maintenance works for the next 25 years.

Nonetheless, the cost of the facility is currently not the most critical issue as there are multiple protests accounting for its environmental impact. The objectors include public health experts, political parties, trade unions, citizens and academics who earlier this year sent an open letter to London mayor Sadiq Khan mentioning that it is “foolhardy to press ahead with an infrastructure project that can only contribute to the UK’s excessive greenhouse gas emissions-as well as skewing London’s transport system further towards roads, and exacerbating local air pollution problems,". In this letter, another critical point is that while the emissions from other sectors are being reduced, those in the transportation industry are still growing, a fact that has to be quickly addressed given the commitment of the UK to tackling climate change. In addition, the London Labor Regional Conference hosted in July 2021 voted against the project and the same will the supporters of Extinction Rebellion soon do.

An extensive report published in 2020, suggests that the tunnel will eventually increase the traffic volume in the area resulting in more vehicles on the roads and eventually to increased pollution. The problem with pollution in London is indeed severe. According to London's City Hall, about 8% of schools in the city are located in areas where the pollution limits clarified by the World Health Organization are exceeded with the problem mainly caused by traffic.

How the development of this controversial project will advance is still uncertain. Despite the projects, works on the facility are reportedly continuing. A spokesman for Major Khan stated: “The mayor is taking some of the boldest action of any city in the world to tackle air pollution in London…. Anyone who has been caught in traffic due to a problem in the Victorian-era Blackwall tunnel will know that there is an urgent need for another river crossing in this part of London”. 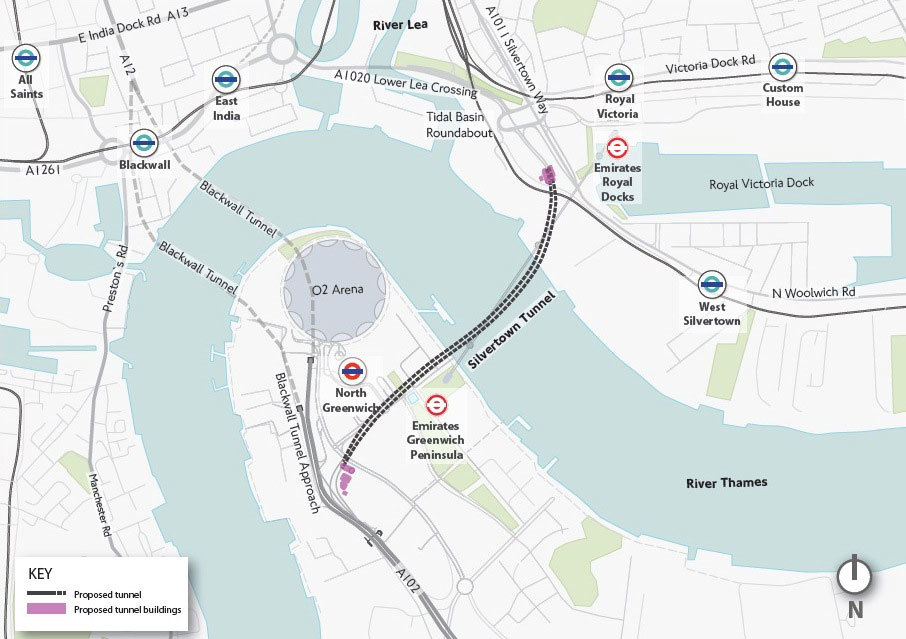 The option of a new 22-mile inner London orbital road tunnel is under investigation, after the initi...

Transport for London (TfL)—the statutory authority responsible for most aspects of Greater London’s...

The new crossrail, named after Queen Elizabeth, which features a marathon of brand new tunnels benea...

London's Crossrail, the most significant infrastructure project currently in the U.K. aims to improv...

Norway plans for a pioneering construction project that will facilitate ship transportation. The pl...