A sinkhole that opened near Pantheon in Rome revealed an ancient Roman street.

The Pantheon is an ancient structure in Rome which was completed around 126-128 A.D. It is nowadays utilized as a Catholic church but it was originally built as a Roman temple. There is not sufficient evidence about the designer of the project or the duration of the construction works.

The building is made of granite columns following the Corinthian order and features a massive ceiling (with an opening) made of Roman concrete which was the largest ever built at the time. What is really impressive is that the dome is still the largest ceiling made of unreinforced concrete in the world. Click the video in the Media section below to learn more about the engineering features of the Pantheon's dome.

The sinkhole opened on April 27, 2020. Fortunately, no one was injured as the square was not crowed due to the COVID-19 lockdown restrictions that were imposed in Italy at the time.

Within the sinkhole, archaeologists found a paved road composed of ancient slabs. The slabs were made out of travertine, a sedimentary rock that was widely used in Rome to construct many ancient monuments, including the Colosseum. Similar to limestones, travertine consists of calcite (CaCO3). It is formed by the precipitation of carbonate minerals and has high porosity.

The ancient paved road was probably constructed in 27 BC, about 2 decades after the assassination of Julius Caesar and about 150 years before the completion of the Pantheon.

Part of the ancient road had been discovered before (in the 1990s) when Rome's utility lines were installed in the square. According to reports, the sinkhole sent some contemporary paving stones into the utility excavation chambers but no severe damage was caused.

Rome (as many Italian cities) is built on the remains of ancient infrastructure which include cavities (from tunnels, catacombs, quarries etc) created at an older time period. Moreover, a large portion of the city lies on soft, sandy soils that are readily eroded when struck by rainfalls or subjected to dynamic loads (earthquakes or vibrations by road traffic). These conditions make the ground prone to sinkhole formation. "The most sensitive area is eastern Rome, where materials were quarried in ancient times. The main cause of a sinkhole in the city is the presence of an underground cavity," Stefania Nisio, a geologist involved in mapping Rome's sinkholes, stated.

According to the city's officials, a large project to apply measures and prevent the opening of sinkholes in Rome is underway.

In February 2018, a large sinkhole emerged at a construction site in a residential area of Rome, damaging 6 vehicles and a road. 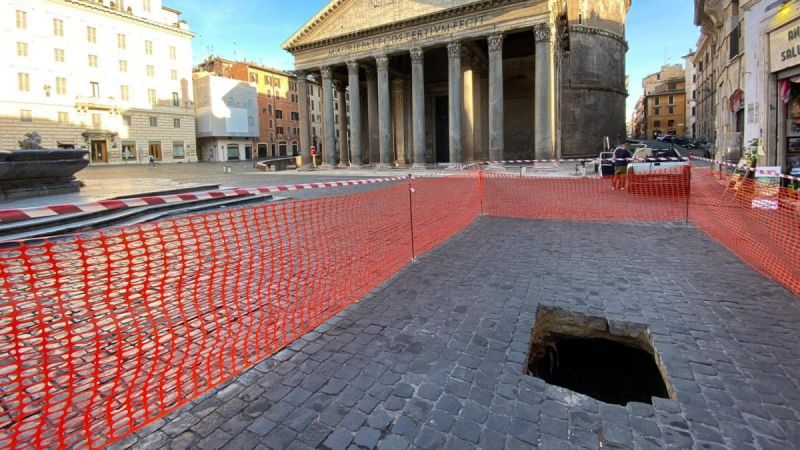