A massive sinkhole emerged near a hospital in the city of Naples, Italy.

The sinkhole opened on Friday, January 8, 2021, at a parking lot near the Ospedale del Mare hospital.

A sinkhole is a depression in the ground that is triggered by the failure of the surface layer. They are typically caused by erosion processes and are common in carbonate rocks that dissolve in the presence of water (karst processes). Their size and depth may significantly vary and they are usually bowl-shaped.

Photographs from the incident showed that the sinkhole opened in an area consisting of clayey soils. It covered an area of more than 2,000m2 and measured around 20 meters in depth. Numerous cars were swept away while the nearby COVID-19 facility was evacuated due to power outages. There are plans to re-open the COVID-19 wing within the next days after certain issues have been resolved. Fortunately, no other wing of the hospital was impacted.

The local fire department rushed to the scene in search of potential victims, but no victims or injuries have been reported.

The conditions under which the ground collapsed have not been identified yet. According to the Chief firefighter Commander, Ennio Aquilino, there is a suggestion that the sinkhole opened after water accumulated beneath the surface of the ground due to the recent rainfalls.

Local residents mentioned hearing an explosion at the time of the ground failure. Officials confirmed the incident and suggested that it is probably associated with gas or oxygen pipes but it is not clear whether it occurred before or after the sinkhole emerged.

Impressive drone footage from the ground failure can be found in the Media section below. 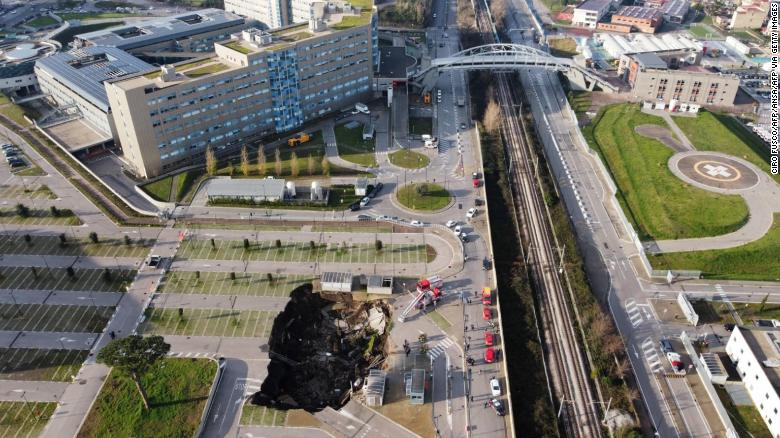 A massive sinkhole that threatens a house suddenly emerged in Mexico. The sinkhole opened in a fiel...

Sinkhole appears in garden after old mine collapses in UK

A sinkhole appeared at the garden of a residence after an old mine beneath collapsed. The sinkhole...

A massive sinkhole opened up in Bangladesh and swallowed a whole house. The house is located on t...

A sinkhole that opened up in Chile over the weekend could fit the Washington Monument inside. Offic...