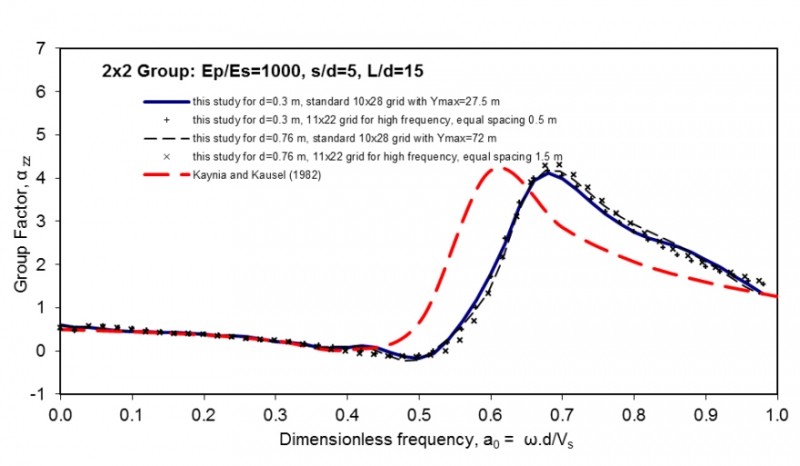 VERSAT-P3D is a finite element computer program for quasi-3D nonlinear dynamic analyses of single piles and pile groups in frequency and time domain.

VERSAT-P3D is a finite element computer program for quasi-3D nonlinear dynamic analyses of single piles and pile groups in frequency and time domain (Wu and Finn, 1997, Canadian Geotechnical Journal 34: 34-52). The frequency-domain analysis is used to determine dynamic stiffness and damping as a function of vibration frequency, and to compute moment and shear response of piles subjected to loading at the pile top or at the cap of a pile group. Dynamic time-domain analysis is used to directly compute pile response to seismic loading and therefore allow direct determination of the time-dependent stiffness variation of single piles or pile groups. The time-domain analysis accounts for both the kinematic soil-pile interaction and the inertial interaction between foundation and structure under earthquake. All loading applications can be carried out in a nonlinear analysis that uses strain-dependent soil moduli and damping, yielding at failure and a no-tension cut-off. The response of a pile group is computed directly without having to use pile-soil-pile interaction factors. In addition to the quasi-3D theory background as described in Wu and Finn (1997a , 1997b), a special 4-beam pile element has been used in VERSAT-P3D. Instead of representing the pile by a line-beam element, which does not take a physical space in a 3D model, each pile segment is represented by four beams arranged at the four corners of a pile cross-section. For simplicity, a pile cross-section, either square or circular, is modeled as a square. The four beams are rigidly tied to each other so as to produce identical response, or to act as a single pile element. The 4-beam pile element is introduced to take into account the effect of the physical space of a pile section on the response of a single pile or a pile group.

Slope Stability of Embankments on Clay