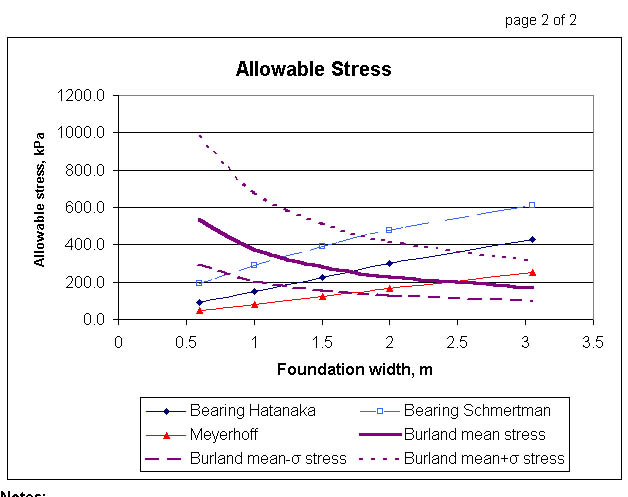 The SPT blowcount is correlated to the friction angle. Two correlations are used: The Schmertmann (1975) and the Hatanaka and Uchida (1996). These methods are based on actual data and take into account the effect of the overburden stress. The more traditional recommendations (Peck et al. 1984, Meyerhof 1956) are not used in this program as the use of the Standard Penetration Test has improved since then.

This is a simple empirical equation provided by Meyerhof and is in general very conservative.

The Burland and Burbdige (1984) method is used, which was considered by the author as the most reliable method to date. The N value in this method is the average N value over the depth of influence below the footing, approximately, 1.5 times the width of the foundation. This is a statistical method, and for that reason, the mean + sigma and mean - sigma ranges are also shown.

Corrections need to be made in the SPT blowcount, according to the recommendations of Youd et al (2001), for the type of sampler, the rod length, the borehole diameter, the energy transmitted to the sampler and the overburden stress.