VertekCPT: Want to clarify the relation between SPT & CPT?

To determine the mechanical properties of soil, an engineer can rely on both CPT and SPT methods. Learn more on correlating test results in Vertek's latest post!

In the Standard Penetration Test (SPT) a borehole is drilled to a desired depth and a hollow sampler is inserted and driven downwards with a hammer. Hammer blows are counted until the sampler reaches the typical depth of 18'', this taken to be the SPT number, which is then characteristic of the soil's mechanical properties. As with CPT data, a number of corrections are applied, such as the correction for the mechanical efficiency of a manual hammer, estimated at 60% at shallow overburden conditions, thus deriving the N60 value.

Being the most common in-situ soil testing method, SPT is frequently compared, correlated with and converted to CPT test results. To do so, a number of methods have been developed. For instance, the Robertson and Campanella method is used to correlate SPT and CPT data through the ratio of the tip resistance normalized against the atmospheric pressure over the N60 value. Soil behavior is categorized based on the specific ratio and using the table below: 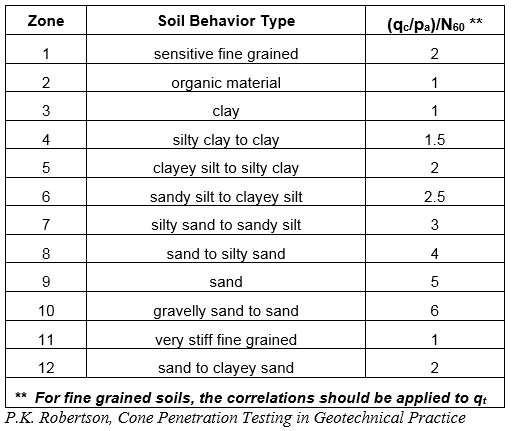 Although it is simple in its application the specific method may cause confusion in the case results fall on the border of two soil behavior categories or in cases where the ratio of CPT to SPT data indicate different soil types.

The Jefferies and Davies method is a more robust method for converting SPT N-values to CPT data or vice versa. Based on the Soil Behavior Type Index, Ic, it correlates tip resistance normalized against the atmospheric pressure (qc/pa) to the N60 value. The method overcomes the shortcomings of the previous method however it does not apply to sensitive fine grained soils and very stiff sands to clayey sand and very stiff fine grained soils (soil types 1, 8 and 9).

by Daniel Wai RS3 is well known for its capabilit...

The thoughts behind integrating Rocscience’s dyna...