39 workers were trapped in an underground mine in Sudbury, Ontario, Canada but all of them were eventually rescued.

The Totten mine, owned and operated by Vale, a multinational firm from Brazil, opened 7 years ago and produces copper, nickel and precious metals.

The incident began as of Sunday, September 26, 2021. The miners were initially trapped underground after the main lift system was damaged by a heavy scoop bucket. Hence, they could not utilize the conveyance system to return to the surface. According to Vale, the laborers had access to food and water. They could also regularly communicate with the staff and speak with their families.

The miners advanced to refuge stations and had to climb up ladders to reach the surface of the ground. This ladder system had been established as a backup for such circumstances. Not all miners were located at the same position. Some of them had to climb more than 1.200 meters to reach the surface. Rescue teams were employed and 58 responders helped with the efforts. The teams entered the mine through the secondary ladder network to provide supplies to the miners. According to Nick Larochelle, president of the local United Steel Workers union, the city of Subdury occupies "some of the best rescue crews in the entire world - workers who voluntarily train on an ongoing basis, in case an emergency like this ever happens". Mr. Larochelle emphasizes the risk that miners take when working underground but he also highlights the advances that have been made during the past decades to increase the applied safety measures.

The first miners emerged to the surface of the ground on Tuesday, September 28, about 35 hours after being trapped. By Tuesday afternoon, 35 miners had been rescued with 4 more emerging later. A local union coordinator mentioned that miners have different physical abilities hence, some were capable of climbing the ladders quicker than others. Hence, it is reasonable for them to arrive at different times. The entire rescue operation lasted for about 2,5 days. The miners were exhausted but they were generally in good spirits and eager to return to their houses. All of them were examined by medical crews before being released.

Both Vale and Ontario’s labor ministry are dedicated to investigate the causes of the incident and prevent similar malfunctions in the future. Vale’s stock price fell after the incident but is under recovery after the positive outcome of the operation. 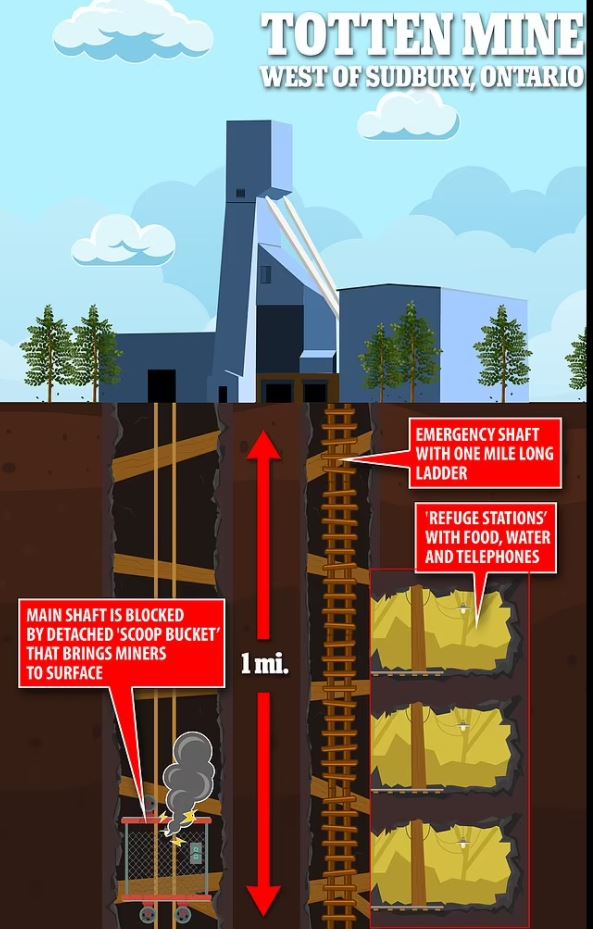 Miners are out of Totten Mine in Sudbury, Ont.
CBC news

4 mineworkers were found dead after a rockfall occurred in a gold mine located in Orkney, South Afr...

Mine collapse in Congo: At least 43 fatalities

At least 43 miners were killed after a mine collapsed in the Democratic Republic of Congo. The dram...

Mine explosion in China: 15 miners dead

15 miners were reported dead and 9 more were injured after a gas explosion in a Chinese coal mine....

The search continues for the miners buried in a Mississippi gravel pit. On Friday, June 3rd, the pit...

Ten miners were killed. Another two were rescued 10 days after the flooding on September 28, in the...

19 workers that were trapped due to a mining accident in 20 October 2018 in East China, are confirme...

2 persons were reported dead after a disastrous trench collapse in Windsor, Colorado on Tuesday, Ap...

Bosnia - Herzegovina: Tragedy in mine

Four miners were killed and two injured due to a landslide in a lignite mine in Kakanj in central Bo...

Vale, the company owning a mining waste dam that collapsed in 2019 was fined $7 billion in compensa...