After the successful and well-received introduction of the discontinuity element in earlier releases, PLAXIS continues the path to offer understandable and easy-to-use functionality for rock and mining engineers. In this latest release, PLAXIS 2D V22 Update 2, the new cable bolt element and material type are introduced. Cable bolts can be used to simulate rock reinforcement like grouted cables or frictional/grouted bolts that work mostly in tension and/or compression.

To model reinforcement in previous releases, users would rely on the embedded beam structural element and change the embedded beam's behavior setting to act as "Rock bolt" rather than the default "Pile" behavior. However, the embedded beam's material set parameter input is highly tailored to its traditional use as a pile element, this can make it difficult to input proper parameters when using it as a reinforcement element and might require tiresome calibration of the parameters. Some capabilities that are relevant to modeling reinforcement are also missing from the embedded beam element. With the new cable bolt element, the material set definition includes input of bond stiffness and bond strength parameters in line with rock engineering practice, making it easier to use and calibrate. Other capabilities include confining stress dependency and pre-stressing the element. Offering the cable bolt as a separate dedicated structural element with its own drawing and selection tools, also allows PLAXIS to develop specific and more advanced behavior geared toward the rock and mining engineering practice, independent from the traditional embedded beam element. Note that while the cable bolt element is available as a new structural element in the general program, it is not available yet inside the Tunnel Designer for reinforcement pattern generation. 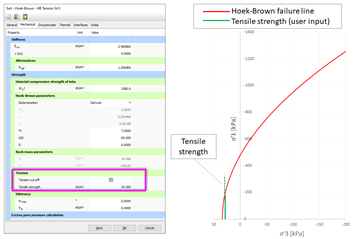 For more details, read Tensile behaviour in the Hoek-Brown model

Simplification of polylines and polygons

Exported cross-sections from CAD files can contain many intermediate points and lines that are less relevant for numerical analysis. Once imported into PLAXIS 2D, these dense geometries will result in overly fine meshes and will slow down the performance of the program. During the import of, for example, geological cross-sections coming from Leapfrog Geo or Leapfrog Works or CAD applications, users can now select the Reduce point density option in the import dialog window to reduce the number of points of polygons or polylines present in the imported file. By reducing the number of points during the import process, the user can optimize the imported geometry for numerical analysis and in turn generate a better optimized mesh.

By default, PLAXIS 2D will automatically detect if the imported geometry is too dense, propose a reduction factor to the user and show the resulting geometry, which can be edited or accepted at any time during the import process.

Improved Robustness of import and intersections

The free field boundaries implementation has been updated for PLAXIS 2D, offering several improvements. Deformation patterns, particularly along the boundaries, are now consistent with those expected in a far-field analysis and there is no longer a need to include drained material columns at the model boundaries when performing an undrained or a partially undrained analysis.
Several validation exercises were developed to ensure that the response when using free field BCs is consistent with what is expected from theory of wave propagation, as well as obtained when using other boundary conditions (e.g., tied degrees of freedom). The implementation is also now more consistent with PLAXIS 3D.

For users regularly performing dynamic analysis including free field and compliant base boundaries, it is recommended to switch to this latest release to benefit from the easier model set-up and more accurate results.

In earlier releases of the PLAXIS CONNECT Edition, users with Academic or Student license types would encounter watermarks on the various settlement plots and curve plots in the Output program, as well as the drawing canvas in the Input program. In this latest release, all the watermarking has been removed entirely from the program, ensuring that no intrusive overlays will hinder Academic or Student users when transferring their PLAXIS results into their reports, papers or presentations.

In this release for 2D and 3D, we fixed some critical issues from PLAXIS Version 22 and Version 22 Update 1:

For all resolved issues, please see the full release notes for PLAXIS 2D and PLAXIS 3D.

Release compatibility when upgrading from V21

Since PLAXIS V22 Update 2 also contains the new data structure of the material database and the more flexible and more robust way of handling project units introduced in the previous release, similar precautions apply with respect to V21 release compatibility. PLAXIS V22 Update 2 will be installed alongside PLAXIS V21, instead of overwriting it. Calculated V21 projects opened with this latest release will automatically be saved as a converted copy with the _converted suffix. After the conversion, remeshing and recalculation are required. In this case, the original V21 project will remain unchanged. For V21 projects that only have their geometry and/or some material sets defined and may be either meshed or not, these projects will be opened by V22 Update 2 without converting to a saved copy. The original V21 project would be overwritten upon saving.

Note that these converted projects are stored in the file format for PLAXIS V22 Update 2, this means that earlier versions of PLAXIS will not be able to open the converted project files. To continue using V21, users can just open the original V21 project.

With the latest update, the published PISA rule-based models (Cowden till, Bothkennar clay, and General Dunkirk sand) are built into PLAXIS Monopile Designer and ready to be used at the click of a button. This removes the need to manually generate and import input files and accelerates the analysis cycle. You can now get to rule-based design results in a matter of minutes.

The design of foundations for offshore wind requires thousands of calculations. The new Python scripting API for PLAXIS Monopile Designer enables these automated workflows. In V22 Update 2, the functionality of the Python scripting API is extended to also include 3D design verification models. You can now write combined scripts, calling on PLAXIS Monopile Designer and PLAXIS 3D to automate the generation, modification, calculation, and comparison of results between 1D and 3D analyses.

PLAXIS V22 brings a major overhaul to the data structure of the material database and a more flexib...

With the introduction of the PLAXIS CONNECT Edition V21, SOILVISION products are adopting the PLAXI...

PLAXIS 2D/3D WorkSuite is the most comprehensive option of PLAXIS which includes PLAXIS 2D/3D Ultim...

Bentley is happy to announce the release of the new PLAXIS V21 offering new features and PLAXIS con...