“We are incredibly lucky to have individuals who've developed a real-life saving expertise to be able to find and extract clean water from the ground and get it to the people who need it most. And how do they do that? The answers start under the surface. Many hidden challenges are beneath our feet and the only way to lock them is through technology. And this where Seequent comes in by developing world leading subsurface software and taking the guesswork out of what is happening beneath our feet,” Jo Knight said.

Geraint Burrows presented a project that they've been working for the past 5 years in Bangladesh to showcase how cutting-edge technology and software and working with industry can really help the humanitarian sector with the challenges that they are facing.

Groundwater Relief is a UK registered charity which provides groundwater expertise and services to the humanitarian sector and to organizations who are supplying water to communities and populations who lack access to a safe and sustainable water source. Core beliefs of the Groundwater Relief are: 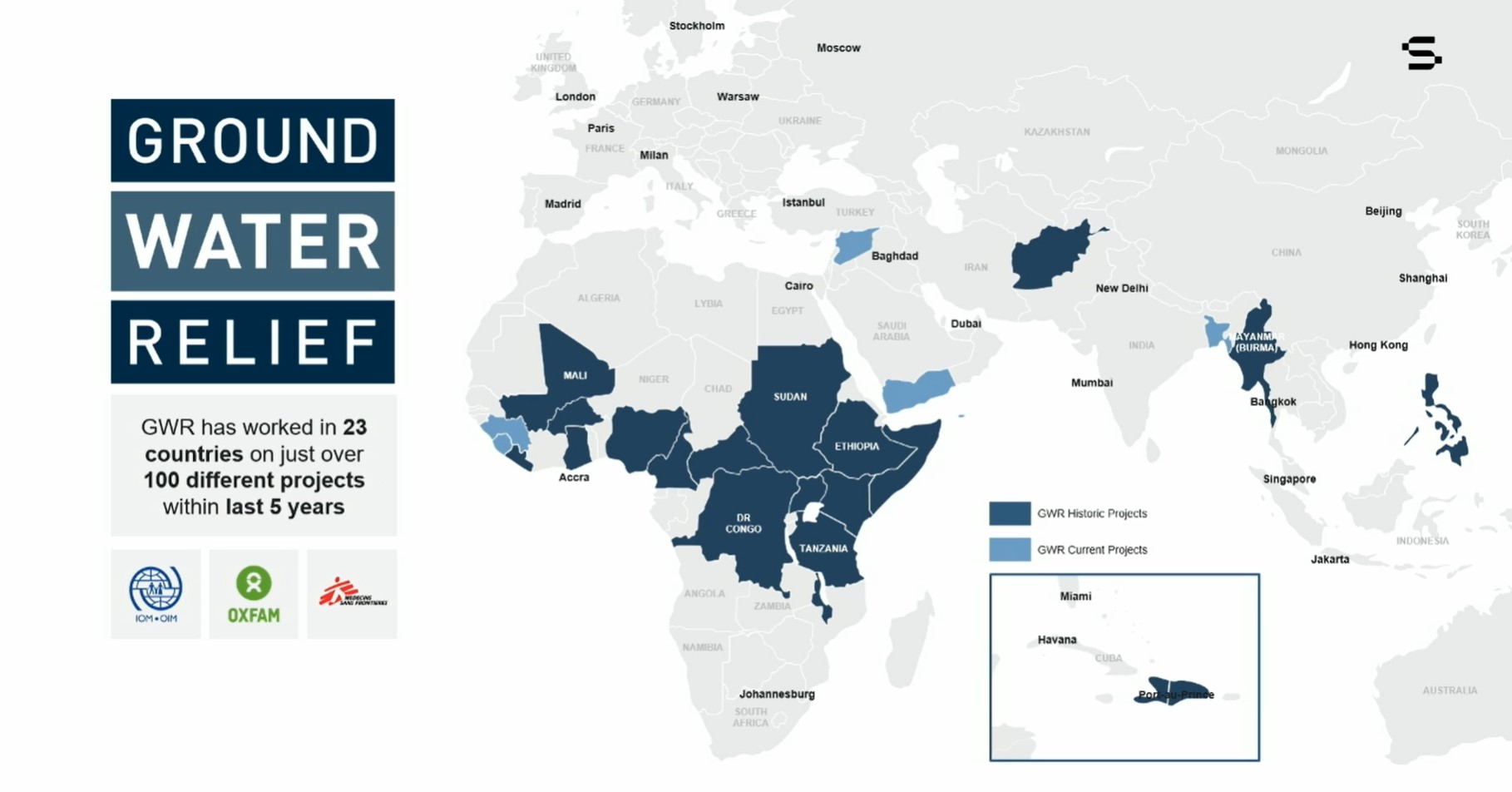 In August of 2017, the Myanmar security forces started clearance operations on the Rakhine people in northern Rakhine State which led to 750,000 people fleeing across the border to neighboring Bangladesh. They joined an existing population of refugees in Bangladesh which led to, totaling the number of about a million people who are displaced and living currently without any status in Cox's Bazar, Bangladesh.

“We carry out all this work through some core staff and a global membership of about 450 groundwater experts which enables us, while working on a project on the ground, to engage with the local expertise as well as bring in the international expertise to form a team and share knowledge both ways,” Geraint Burrows said.

The immediate response to the initial crisis by the humanitarian sector was to get water supplies to the displaced people as quickly as possible. Initially this was using local manual drilling contractors to drill small diameter bore holes, shallow depths and installing them with suction pumps that were available within the local market. Thousands of such boreholes were drilled initially to cater for immediate water needs. 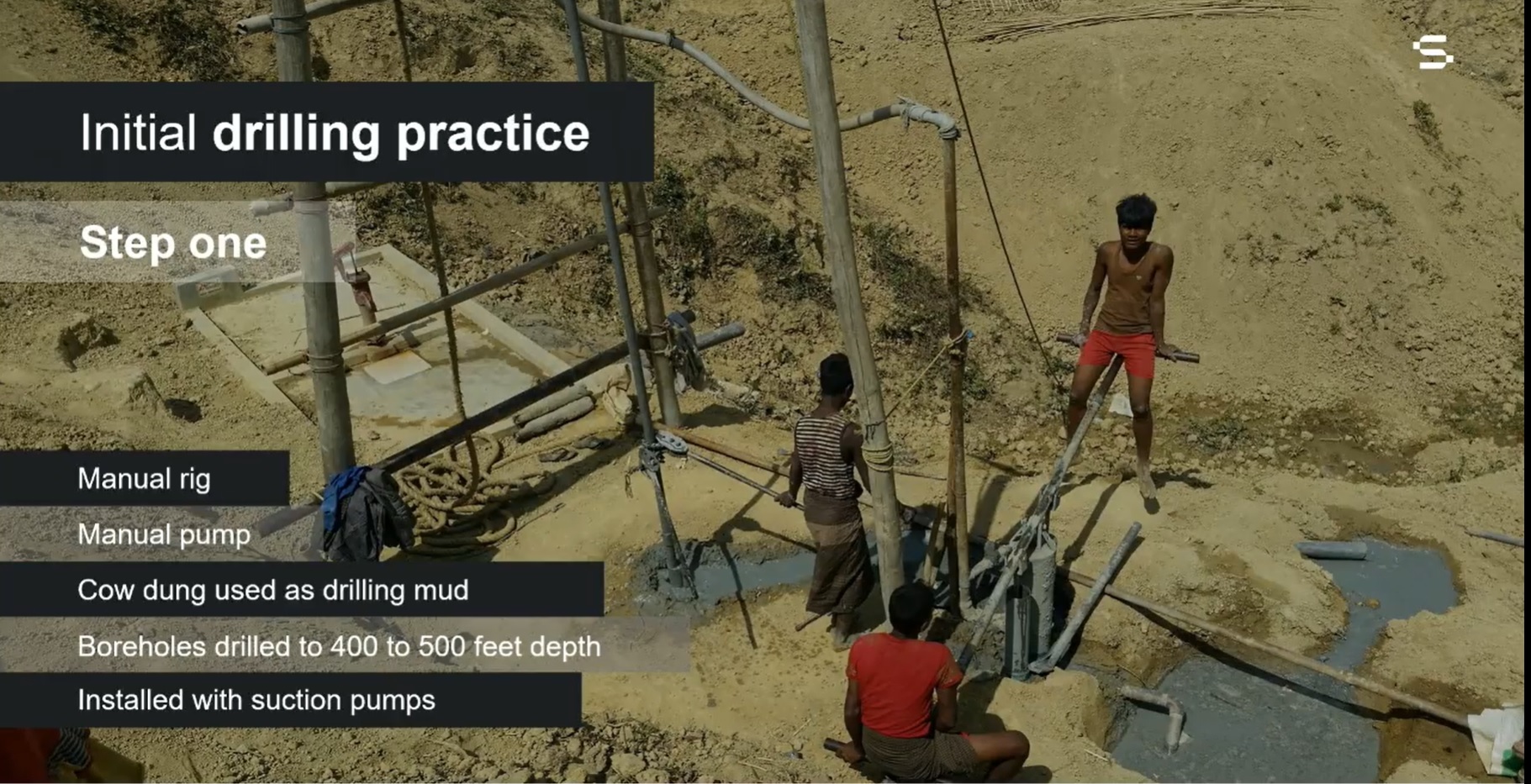 Once the acute phase of the emergency had passed, Groundwater Relief could start focusing on improving water sources, led by Médecins Sans Frontières, in order to cater their medical facilities with better water supplies. Médecins Sans Frontières started to drill larger diameter bore holes with machine drilling to install electrical submersible pumps into these boreholes and then pump the water into tanks that could be then treated and distributed from there. 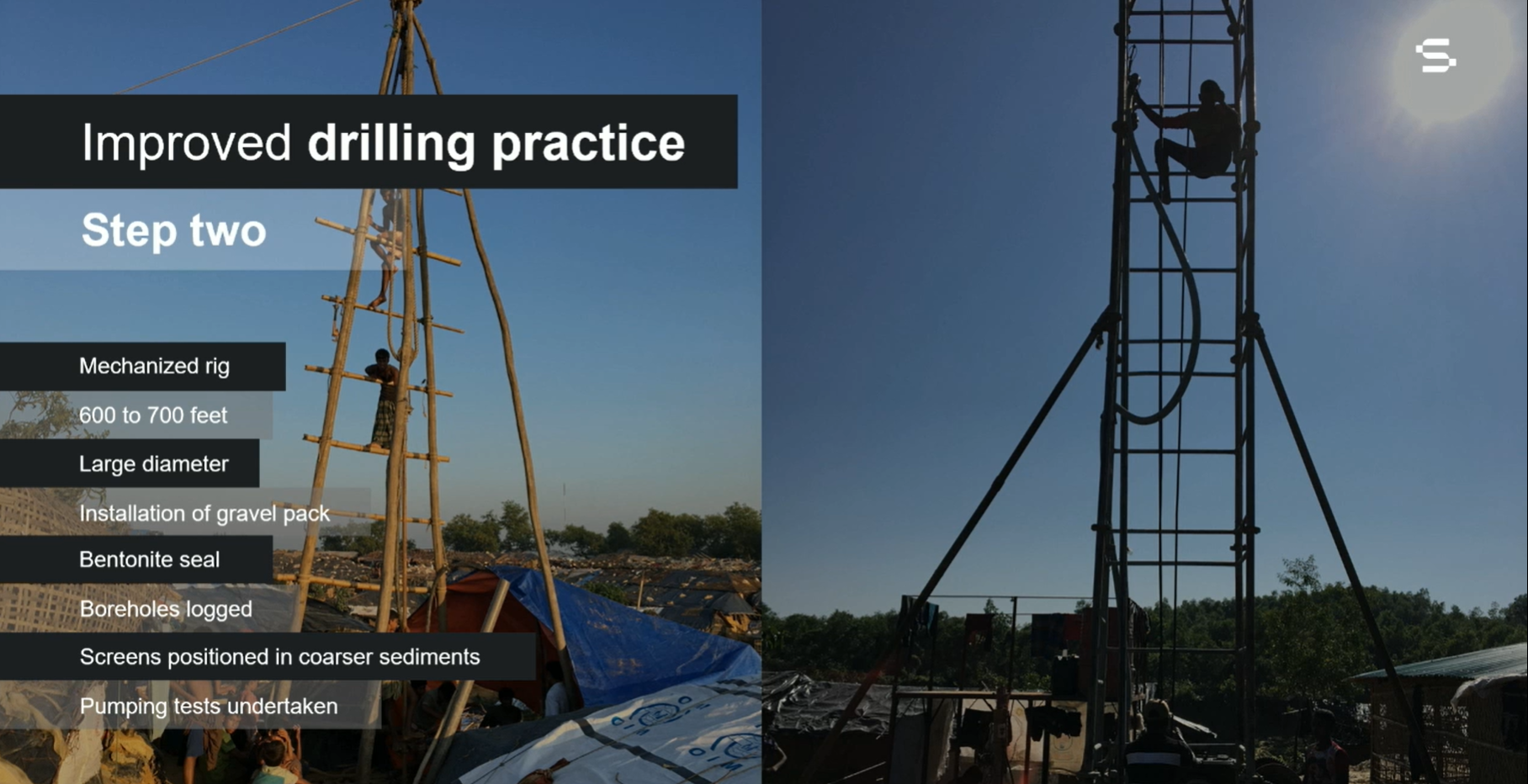 By having hydrogeologists on the rigs, Groundwater Relief were able to start collecting data about the aquifer systems underneath this new city that had been created. Along with Médecins Sans Frontières, they also set up a monitoring program of the water resources underneath starting from January of 2018. 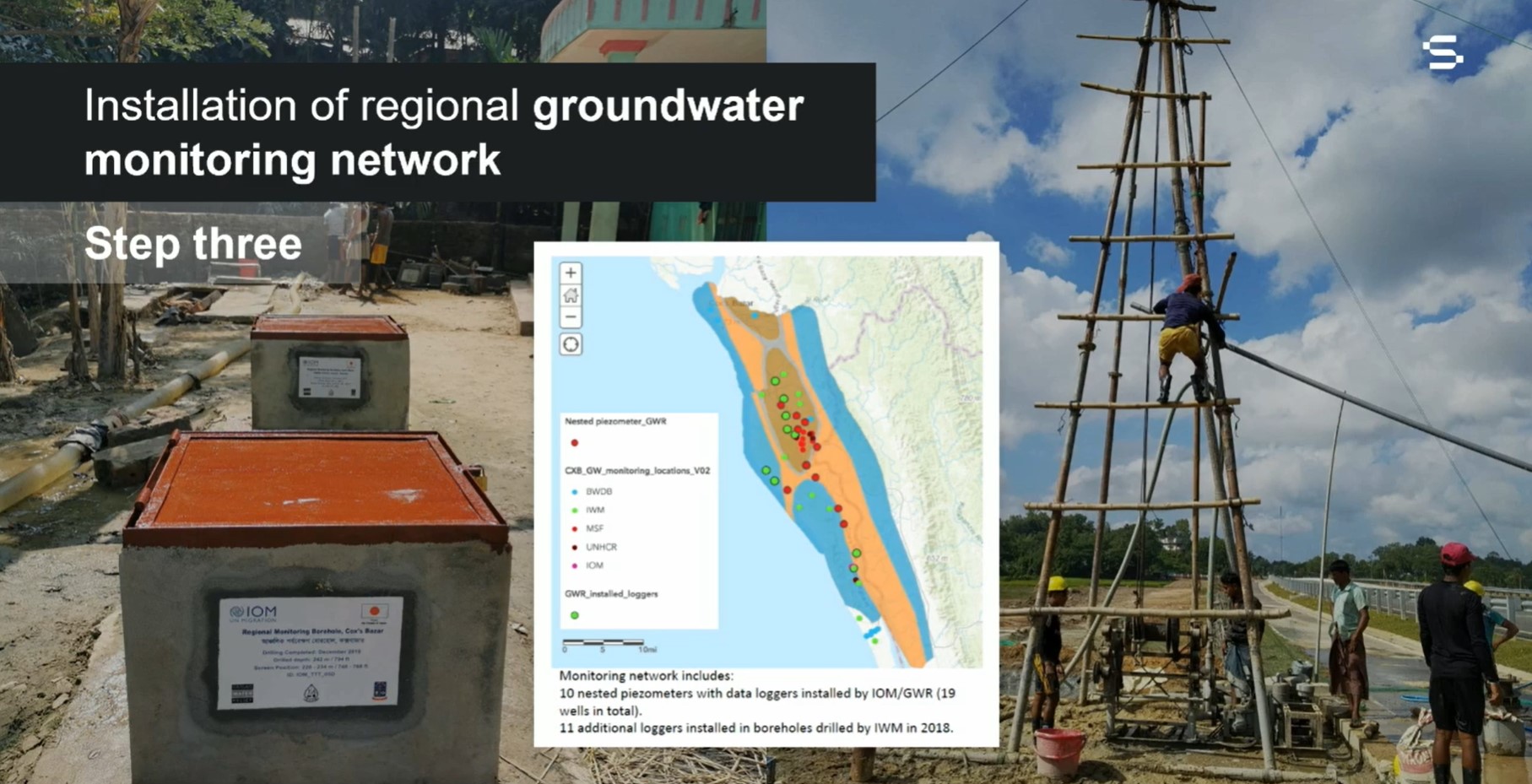 "Obviously we didn't know anything really about these water resources at all and so in order to try and keep track of what's going on with those water resources, to ensure, try and understand whether it is a sustainable water supply, you need to start to monitor those resources," Geraint Burrows said.

Once the first phase of the intervention had finished concerns were raised about disease outbreaks. The camps were very densely populated, and the populations were relying on these water supplies Toilets and septic tanks were also located in the camps and leaking into that aquifer system.

A way of trying to eliminate the risk of disease outbreak in the camps was to develop a water supply master plan with about 138 water distribution zones. Each zone was a production borehole that would pump large volumes of water into overhead tanks that would be then treated and gravity fed through pipe network systems to the zone population. The plans were designed by a Civil Engineer, however the groundwater resources were not considered as part of those plans. 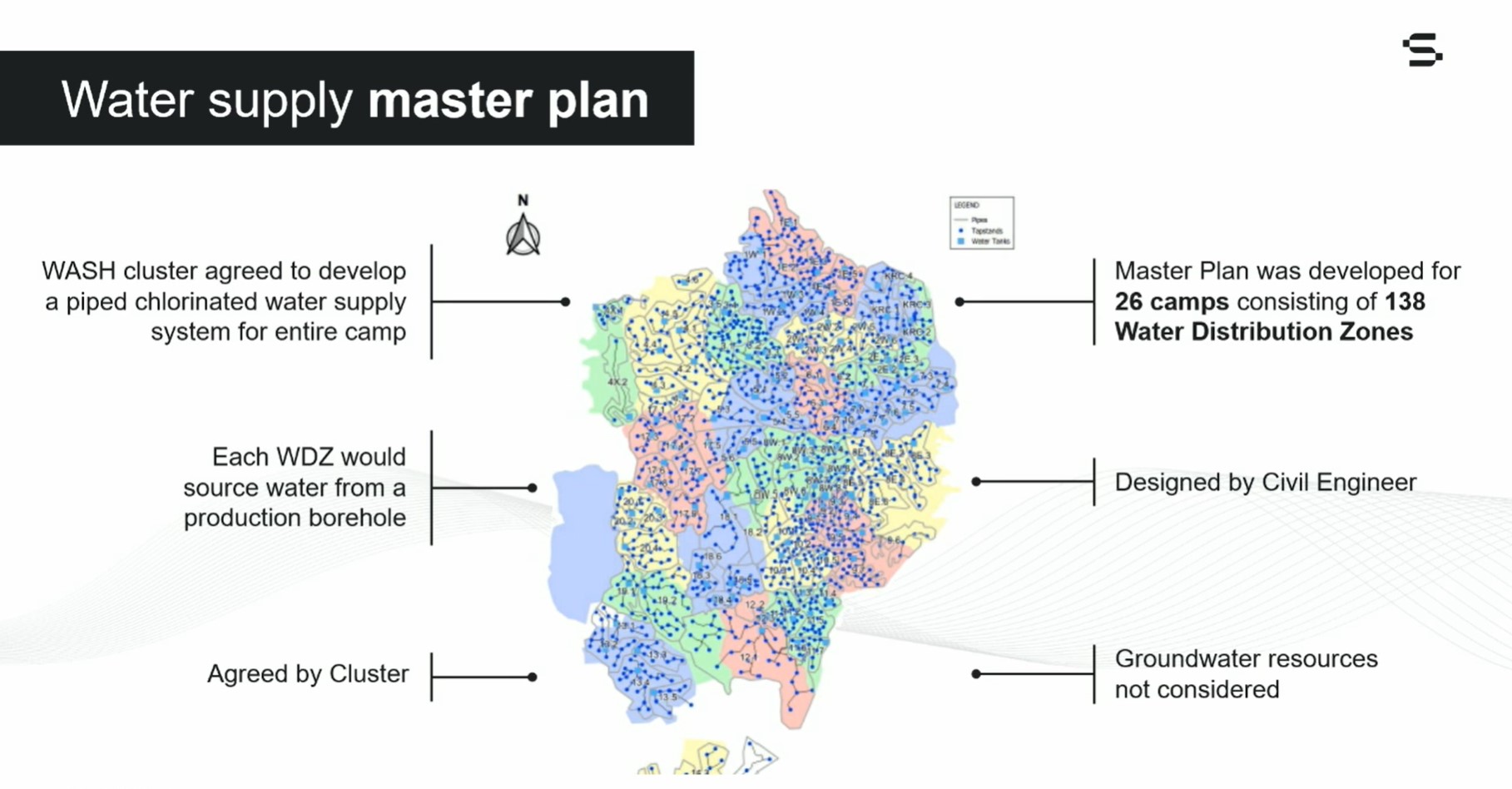 Groundwater Relief, in collaboration with Dhaka University and the Bangladesh Department of Public Health Engineering, put together a plan to map and model the aquifer systems underneath the camp to understand whether this was a sustainable water resource and whether the water supply master plan investment was going to be viable solution.

Little knowledge about the aquifers in the area existed. The existing geological map was out of date and inaccurate, so Groundwater Relief needed to start again from scratch, by remapping the geology of the district and be able to model it.

The remapping consisted of data collection through geophysical surveys, geological mapping, remote sensing and capturing logs from borehole drilling. By using Leapfrog Works software to put all data together enabled Groundwater Relief to create a 3D geological model of the subsurface. They were able then to identify two key aquifer systems that underlay the main camp, populated with around 880,000 people. 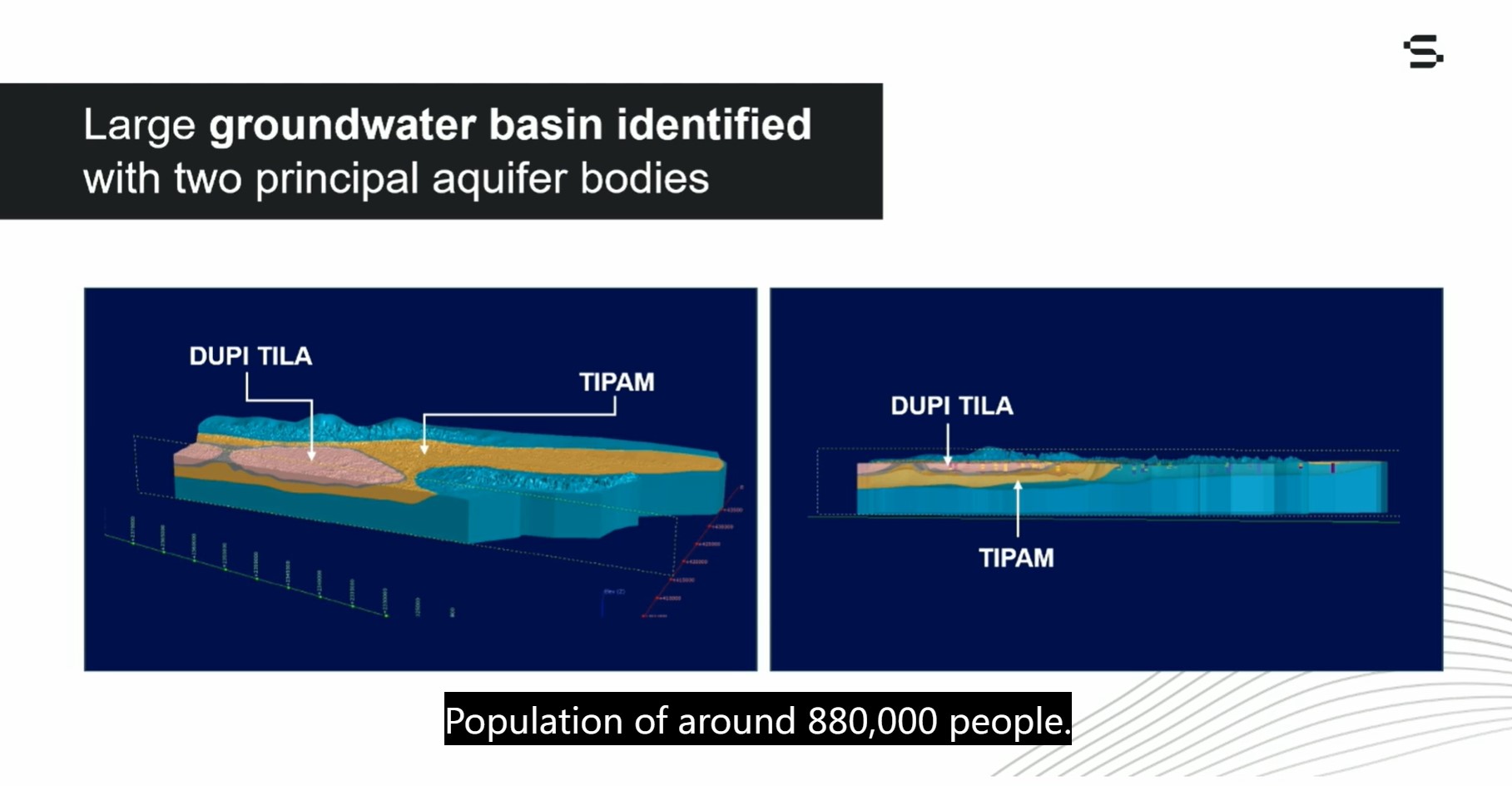 A groundwater model was also created through the 3D geological model and was calibrated using the monitoring data. The results of the calibrated groundwater model demonstrated that would be significant local impact caused by all these new abstractions and the water table in the end would potentially drop by about 25 meters in the center of the camp but would then stabilize as equilibrium would again reached.

These were positive news, since it meant that it was ultimately a sustainable plan, although there would be local impact, both on camp boreholes and boreholes within the local population.

The close collaboration with Dhaka University and the Banglatesh Department of Public Health Engineering, led to a smooth transition of handing over the works done to these institutions. Dhaka University developed their modeling section by training new young graduates with the existing groundwater model, including the software that was provided by Seequent for free to them. Department of Public Health Engineering was also able, in collaboration with Dhaka University, to work on the model and continue develop it and utilize it. As a result, they are now developing a well field and pipe network system to distribute 2.7 mega liters of water per day to Teknaf Municipality, which is the town to the south of Cox's Bazar.

According to a new study, the vast proportion of groundwater stores has not changed in recent years...

California enters the fifth year of a drought and more and more water is pumped from the aquifer....

While Keller is renowned throughout the world for its wide range of geotechnical solutions, perhaps...

The problem of changing water conditions is omnipresent in geotechnical engineering. Groundwater is...

In&nbsp;the Buffalo National River, somebody can hear the running water and the next minute the wate...

A new water cleaning technology introduced in the oil and gas industry!

Looking for more information? Fill in the form and we will contact Seequent, The Bentley Subsurface Company for you.