A check dam constructed across the Thenpennai river at Thalavanur in Villupuram district, India, broke down on November 9th in the wake of incessant rainfall, officials said.

This is the second time within a year that the check dam in Villupuram got damaged. During heavy rainfalls in January this year, the Public Works Department had restored a portion of the dam that got damaged.

When the part of the check dam in Enathimangalam broke down in January, it caused heavy flow of water into irrigation channels.

The dam is located between Cuddalore and Villupuram districts. It has six vents – three in Enathimangalam on the Cuddalore side and three in Thalavanur on the Villupuram side.

TTamil Nadu Minister for Higher Education K Ponmudi visited the spot on Tuesday along with District Collector D Mohan and other officials. Speaking to media persons later, Ponmudi said that a proposal has been sent to revamp the entire structure at a cost of Rs 15 crore.

“In January 2021, a part of the check dam on the Cuddalore side got damaged and now the one in Villupuram has been damaged due to rain. The component got detached from the side bund, which may lead to soil erosion and water might enter villages. Therefore, we have asked the Public Works Department to bring big boulders. Once we are able to reduce the flow using these boulders, we can put cement bags properly on top of that and stop the water. We are going to implement measures immediately to prevent soil erosion and preserve water. The surplus water can be let out. That’s the plan as of now,” he added. 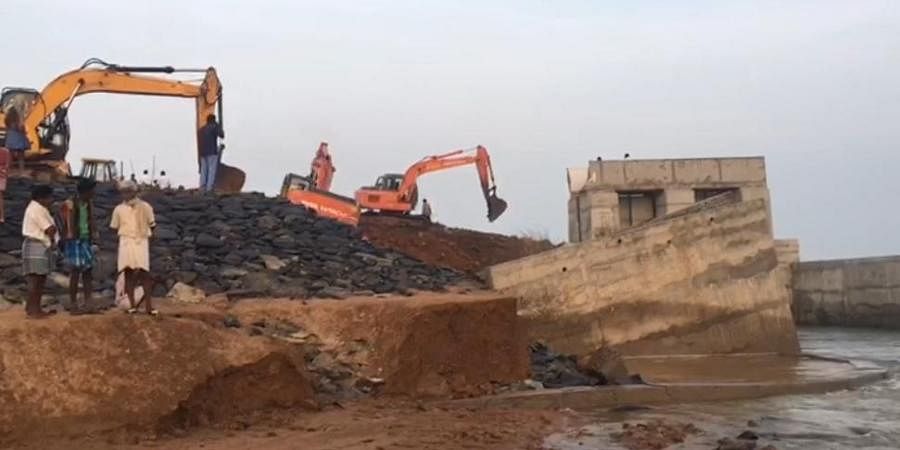 Amid deluge in Chennai, portion of Thenpennai dam collapses in Tamil Nadu

Nov, 23, 2021 building the damaged portions is not the best way, in my opinion the whole dam must be reconstructed.