Landslide hazard modeling is important for landslide prediction in spatial and temporal domains, aiding in land-use development and emergency planning.

Coseismic landslides are the phenomena resulting from an earthquake that produced ground accelerations that exceeded the threshold necessary to initiate slope failure (Newmark, 1965).

Coseismic landslide events are the most significant secondary hazard of earthquakes in areas of high relief, and can be responsible for high fatality rates (Marano et al., 2009). These types of slope failures result in detrimental economic and human loss because they displace massive volumes of rock and soilacross tens of thousands of km2 (Keefer, 1994). For example, the 2008 M7.9 Wenchuan earthquake triggered more than 56,000 landslides, which contributed significantly to the loss of nearly 70,000 lives (Dai et al., 2011). Rapid assessment of hillslope failure is essential for aiding disaster relief teams in recovery and reconstruction after earthquakes (Marano et al., 2009).

The spatial and temporal modeling of landslide susceptibility by means of logistic regression is the most commonly used statistical prediction technique (Nowicki et al., 2014).  Logistic regression modeling of landslide susceptibility is defined by formula coefficients and the linear combination of predictor variables, which predict the presence or absence of a landslide in a particular area. Brenning (2005) found when modeling landslide hazard in both spatial and temporal domains, logistic regression with step-wise variable selection resulted in a lower rate of conditional error compared to other modeling techniques, but faced limitations due to the linearity of the model, causing issues with variable selection and term interaction, limiting the number of variables that should be included.

The model developed by Nowicki et al. (2014) for coseismic landslide susceptibility focuses on an individual earthquake and the resulting spatial distribution of slope failure in near-real time. Using a logistic regression, Nowicki et al. (2014) select predictor variables that produce the best landslide prediction model with the lowest rate of error, with the intent to incorporate the near real-time hazard assessment on a global scale.

The topographic slope for each location was derived from Shuttle Radar Topography Mission elevation data and classified as median, minimum, and maximum. Slope classification aids in mechanical landslide modeling and can be used as a statistical restraint. Material strength is quantified through cohesion and friction angle values, representing the spatial variation in rock strength. Soil wetness is determined through topography using the Compound Topographic Index (CTI), in which lower water saturation is the result of higher slopes and larger drainage basin, and climate interaction does not play a role in saturation. Landslide inventory data was compiled using field-based methods, as well as remote sensing techniques. Ground motion was then incorporated into the model using USGS ShakeMap Atlas 2.0 to estimate the PGA and Peak Ground Velocity (PGV) for the seismic event.  PGA and PGV can be used to determine the magnitude and location of fault rupture, which are important for accurate estimation of ground motion at a particular location.

Following the assignment and calculation of predictor variables, Nowicki et al. (2014) processed all data and converted it into a map projection with cell divisions of 1 km2. In order to incorporate this into a logistic regression, cells were classified on a binary basis of landslide or no landslide. Performing iterations for various combinations of predictor variables, Nowicki et al. (2014) determined a best-fit regression model, shown below:

Where, a, b, c, d, e, and f are regression coefficients

CTI: Compound Topography Index = ln(A/tan(slope)) which serves as a proxy for soil wetness. Evaluation of model accuracy is difficult to determine. Therefore, sensitivity (correct prediction of a landslide), specificity (correct prediction of a non-landslide), and overall accuracy were computed for various landslide probabilities. Nowicki et al. (2014) found that probability values between 10% and 20% yielded the most correct landslide/no-landslide prediction cells. Furthermore, it was found that the regional scale landslide hazard analysis predicted landslide occurrences more correctly than the global model. Inaccuracies are most likely due to differences in earthquake events and error of landslide inventories. For example, amalgamation is a common error and occurs when two individual landslides are mapped as one larger failure, skewing statistics (Li et al., 2014). Failure may also be due to other factors that were neglected in this regression, such as previous slope failures, or environmental contributions such as pre-event precipitation. Nowicki et al. (2014) found that the model was more strongly correlated with PGA and slope rather than friction and CTI, however separate regression models that take certain geomorphic or tectonic activity into account for more accurate landslide prediction may be needed.

Artificial Neural Networks (ANN), non-linear bonds between three or more layers of nodes and connections, are made based on weighting of inputs (Paradeshi et al., 2013). Inputs generally consist of spectral bands from remote sensing images, textural features, and other inputs obtained from a Digital Elevation Model (DEM), such as slope, aspect, and elevation (Lillesand et al., 2008). ANN can accommodate many inputs, but additional information adds hidden layers that allow for more complex problems, which reduces the generalization ability and increases training time (Lillesand et al., 2008). The non-linearity of ANN makes it an effective landslide hazard assessment for large amounts of samples, and is further improved when paired with GIS, but it is not guaranteed to find the most ideal solution, as it may not reach an absolute minimum error (Pardeshi et al., 2013).

Li et al. (2012) utilized GIS and back-propagation ANN methodology in order to analyze landslide susceptibility induced by rainfall or seismic activity. Different predictive variables are considered in hazard assessments for rainfall and earthquake induced landslides in order to produce the optimal model of landslide hazard, observe differences between spatial patterns of landslide events, and create an ANN by weighting of multiple predictor variables.

In order to train the ANN model, Li et al. (2012) used a back-propagation algorithm in a MatLab software package developed by Hines (1997), which weights predictive variables and develops a best-fit prediction model. Landslide susceptibility predictions are then classified as low, medium, or high for both rain and seismically induced landslides, generating hazard maps.

Results from susceptibility mapping of both rain and seismically induced landslide events show that there is not a conclusive relationship between landslide hazard and lithology or catchment area. Further, Li et al. (2007) determined that slope aspect and elevation contribute to landslide susceptibility, as failures occurred most often on north facing slopes below 1200m elevation. Indicating certain variables, such as water saturation and degree of weathering, more strongly influence landslide susceptibility in both rainfall and earthquake induced landslide events.

Capacity-demand analysis of slope stability relies on the Newmark (1965) sliding block model, and determines the probability that a specified amount of seismic shaking will be exceeded, resulting in displacement. Newmark’s model is a simple way to predict coseismic displacement in a specified shaking scenario. The mechanical processes behind Newmark displacement rely on the exceedence of frictional forces holding a block on an inclined surface; it relies on slope geometry, pore-pressure, and mechanical soil properties (Romeo et al., 2000).

Where Dc is the critical displacement ( >10cm)

P is the exceeded at a mean annual rate 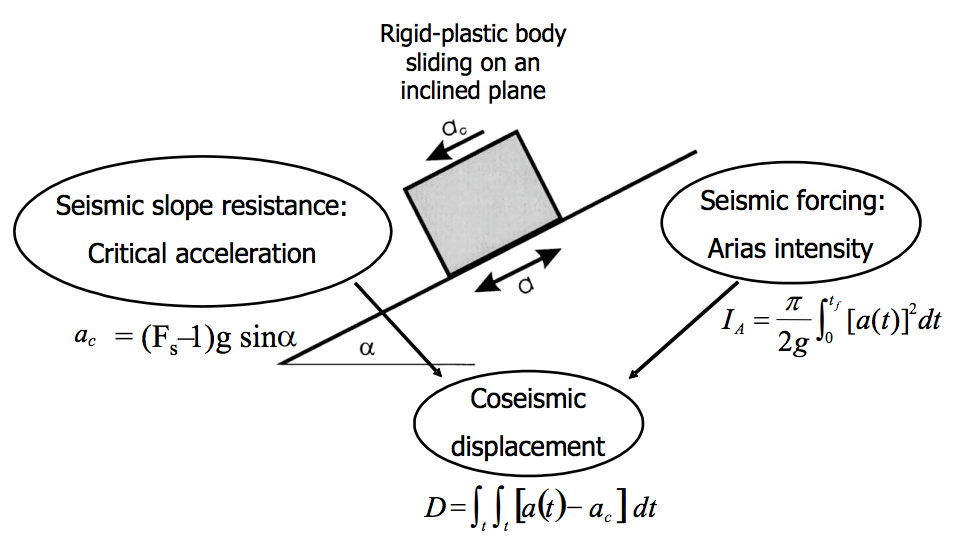 In order to perform landslide hazard assessment, landslide inventory maps, geotechnical properties of existing landslides, a digital terrain model (DTM), and groundwater levels were incorporated into the model. After incorporation of these inputs, limit-equilibrium slope stability analysis was used to compute the static factor of safety.

Romeo et al. (2007) tested the capacity-demand model in southern California using the 1994 M6.7 Northridge earthquake as a case study. The data for the Northridge earthquake is comprised of a comprehensive landslide inventory, records of ground motion, detailed geologic maps, geotechnical properties of lithologic units, and slopes derived from a DEM. Data analysis in the capacity-demand model of Newmark displacement predicts the spatial distribution of coseismic landslides.  The model of failure determined by Romeo et al. (2007) is as follows:

Where P(f) is the proportion of landslide cells

Dn is the Newmark displacement (>10 cm)

The results show, based on slope performance, that the equation is not valid on a global scale, rather it is only valid in Northridge, California where it was calibrated. The capacity-demand model needs to be expanded by means of further variable incorporation for proper assessment of earthquake induced landslide hazard, both probabilistically and deterministically, in order to aid in emergency planning and warning system development.

There are a variety of landslide hazard modeling methods. Methods may be optimally calibrated based on certain regions, certain seismic events, and associated predictor variables.

Logistic regressions are optimal for modeling spatial and temporal predictions of landslide events, resulting in low conditional error rates. However, logistic regressions are limited by their linear nature of covariant relationships, meaning, fewer variables may be accounted for in the model. Conversely, this allows for increased generalization.

The non-linear nature of an artificial neural network accounts for more complex relationships between variables and predicts classification schemes with increased accuracy. However, it is important to consider that increased variable incorporation limits the generalization capability of the model and increases the time necessary to train the model. Moreover, the network produces relationships between the variables that are most likely to result from the supplied training data, but model is not guaranteed to find the most ideal solutions and may not reach an absolute minimum error.

Physical models of landslide susceptibility are ideal to use in areas of incomplete landslide inventories. The model can take into account physical processes of an area prior to landslide events and predict the spatial distribution of displacement in a specified shaking scenario. Mechanical laws are used to understand the effects of seismic activity and its relation to slope stability.

Landslide hazard analyses aim to find the optimal model that produces no false-negatives and no false-positives spatially and temporally on a global scale. There is no current universal landslide hazard model, as susceptibility may be affected by certain geomorphic or climatic variables particular to a specific area, limiting assessment to a regional scale. Further, spatial and temporal models are limited as spatial models lack incorporation of environmental conditions which induce rock-strength weakening and temporal models do not incorporate pre-event variables, such as rainfall prior to a seismic event, or tectonic and volcanic activity.  Further improvement to hazard analysis is necessary in order to more correctly predict landslide hazard in space and time. Multiple methods are currently being developed in order to accommodate these shortcomings.

Congrats on this very useful overview of landslide hazard modeling! It is very informative.

To begin with, there is a typo in the introduction: “…hazard modeling are preferable [b]becasue[/b] they minimize subjectivity in weightage assignment…”.

Also, is it possible to provide some basic explanatory figures regarding the logistic regression method developed by Novicki et al. (2014)? In particular it would be helpful to show the method’s predictions against the used landslide inventories.

In Equation 2, I would like you to provide a brief description of the different parameters and also explain how is Figure 1 correlated with the particular equation.

In equation 3 there is no M parameter in the expression, so please clarify whether this was added by mistake. How is the proportion of landslide cells defined and what is the physical meaning of it? Could you please provide some more information?

Thank you for you very helpful comment. I went back and edited what you suggested.

In response to Nowicki et al. (2014), I have added in a figure of the results from the model.

I have added a brief overview of the equations included in Figure 1, now figure 2, and their relation to equation 1.

For equation 3, the M parameter was included in the original equation prior to calibration, I have excluded the sentence from my project as it is no longer relevant in equation 3.