"There it is, take it." This is the famous line William Mulholland told the city mayor and the public after the grand opening of the LA aqueduct. Mulholland left Los Angeles with a promise to transform the city from a mythic landscape to a real place populated by people through the expansion of water structures (Lin, 2013). After a successful project and Mulholland's impressive reputation as a construction Civil Engineer, he was granted the chance to build the St. Francis Dam. He declared the dam as the solution to the city's drought and promised a reservoir that would supply the public with a year-worth of water. This promise, however, did not last long as the dam failed shortly after its operation.

Minutes before the midnight of March 12, 1928, the St. Francis Dam collapsed catastrophically. The waves of water traveled a course of 54 miles into the ocean and killed over 450 civilians (Water and Power Associates, n.d.). In the dark setting due to power shutoff and time of the event, victims were left blind to the 2 miles wide of flood and chunks of concrete that rushed down the San Francisquito and Santa Clarita valley at 18 mi/hr. (Scholtan, 2007). The dam failed only two years after completion and within its first filling to capacity. Additionally, it passed an engineer’s safety inspection twelve hours prior to the disaster. Many were baffled by the event not only because the dam was newly built, but also because the engineer in charge, William Mulholland, had a high credibility in construction. For this reason, disaster responders and engineers swarmed to study the cause of failure immediately after the event, and concluded that it was mainly due to a weak foundation; but a series of poor engineering judgments also accrued to the dam’s ultimate weakness. The unfortunate failure of the St. Francis dam taught the significance of site investigations prior to construction and operation and served as a lesson for Civil Engineers to study the principles of geology. Today, it is marked as the deadliest and worst Civil Engineering failure of the 20th century. 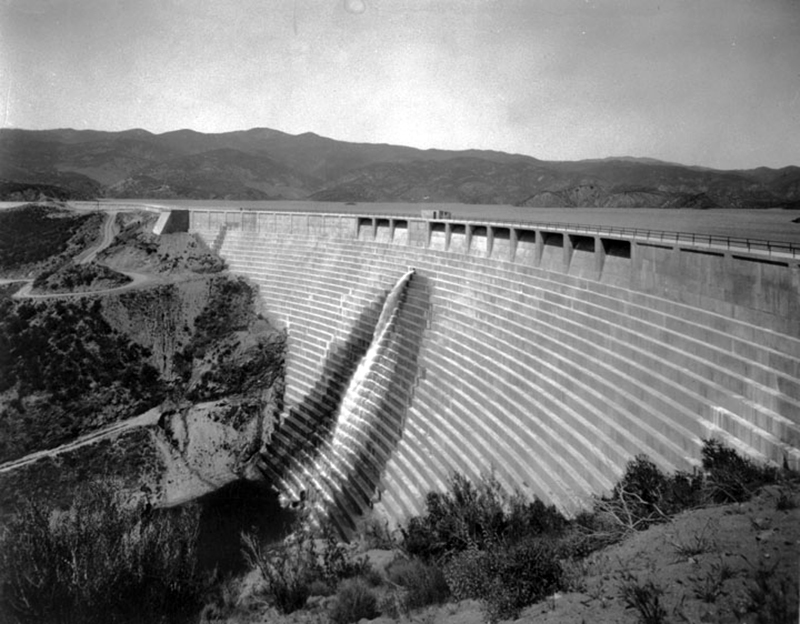 The St. Francis Dam during operation (1926-1928). It is a curved concrete gravity-type dam that featured a stairstep face.

The St. Francis Dam was a two-year construction curved concrete gravity-type dam. It had a height of 207 ft. above foundation (182 ft. above stream bead), an upstream face radius of 492 ft., a length of 668 ft., a base thickness of 168.25 ft., top thickness of 16 ft. and a spillway lip 3 ft. below the top of the dam. It was built to reserve 12,000,000,0000 gallons of water and as terminal storage for the surplus of the LA aqueduct (Wiley, 1928). Originally, Mulholland had designed the dam to be 20 ft. shorter, but because he politically pledged to provide the residents with a one-year ready supply of water in the case of an emergency, he instructed to add an additional 10 feet into the structure twice during construction (KDAWaterStructures, 2013). This was done without modifying the base width to adjust to the new dam parameters.

Noticeable cracks began appearing during the second year of operation, but it was dismissed by Mulholland and patched with grouting because it was typical for a dam of its size. Additionally, it was disclosed that even though Mulholland claimed that the factor of safety of his design was 4, it was surprisingly estimated to less than 1 (Association of State Dam Safety Officials, n.d.). However, some engineers argue that it would have still been a safe dam had it been connected to a high strength foundation, but further investigations proposed that because the dam was not inspected by any independent party, the design only accommodated small foundation stresses and not the full uplift force. Although the dam design flaws were questioned after the failure, engineers still claimed that the main culprit of the failure lies beneath the structure. Still, even though the foundation is the major cause of the collapse, the design played its own role in the failure and it is evident that Mulholland did not include it in his plan to aid for a serious emergency. 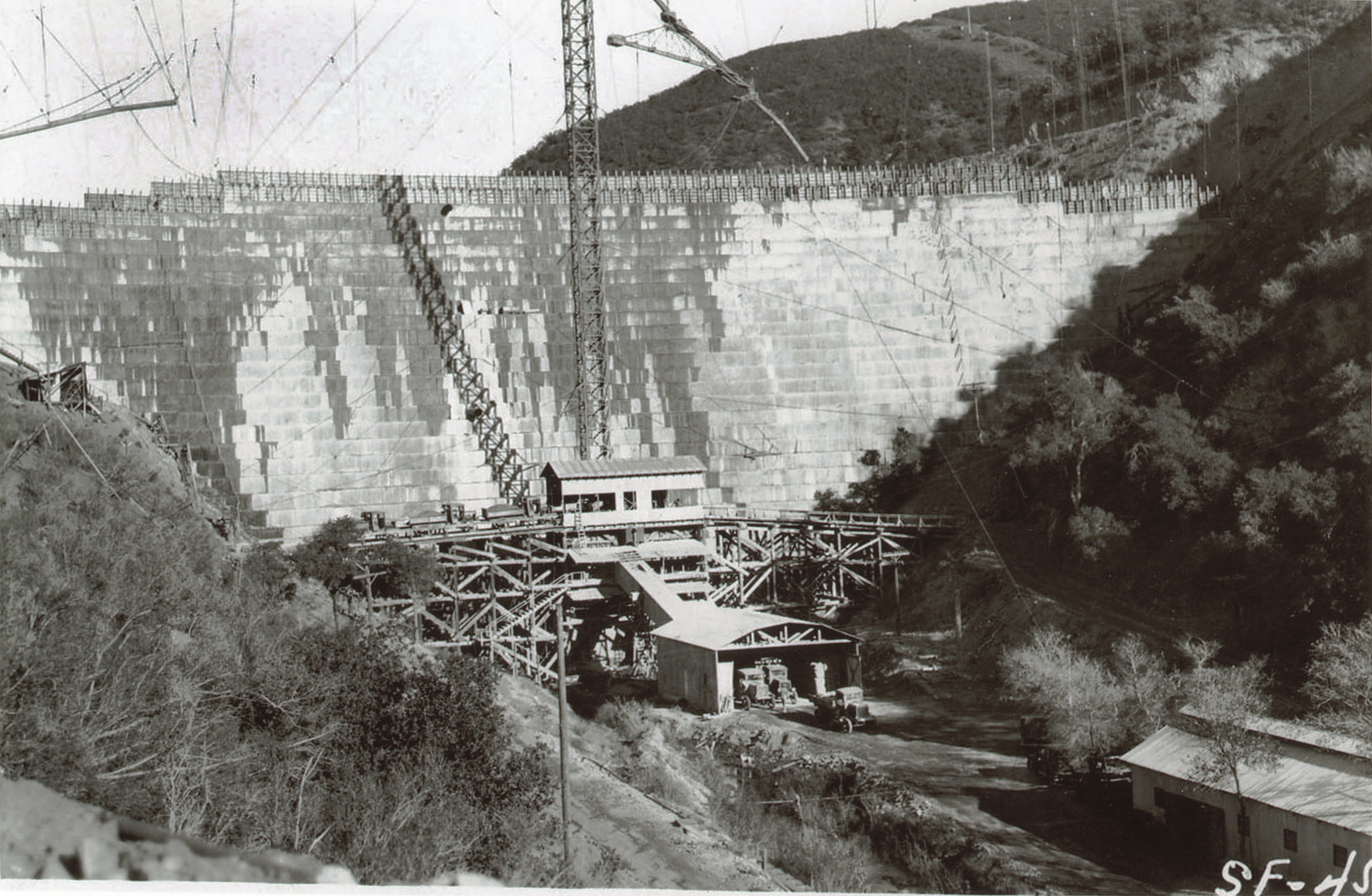 The St. Francis Dam during construction (1924)

Firstly, the St. Francis dam rested above an inactive San Francisquito fault line. Panel reviews showed that although the fault could not have triggered the collapse by earth movements, hydraulic piping was suspected to have occurred along the line because the surrounding bedrock was subject to disintegration when submerged in water (David and Hasselman, 2013). The investigator’s team of Mr. Johnson stated that “Fault planes are good water carriers, and any fracture or fault is not only a line of weakness, but a channel for percolating waters in case they should find entrance.” (Geiger, 1928). In this case, the San Francisquito fault line was about ½ of the height of the dam parallel to the valley, and it served as the water pathway that leads to the internal erosion of the structure.

Underneath the dam was mica schist (central and east area) and red conglomerate (west) divided by the fault line. The conglomerate touched the fault plane and extended to the top of the west valley. Normally, conglomerate has considerably high strength, but quickly disintegrates into sand and clay and becomes plastic when saturated. On the other hand, Mica schist is a weak and thin layer of rocks that are poorly cemented together, which was crushed and sheared throughout the base (Wiley, 1928). The fault was in between these two formations. The right and lower side of the fault plane consisted of gray gouge of schist and clay and the upper and left bound was of red gouge from finely grounded conglomerate. When the gouge is wet, it becomes slippery and settles fragments into a “clayey mud” (Geiger, 1928). Both strengths of saturated schist and red conglomerate were not high enough to compensate for the pressure of the water and the large infrastructure.

A paleolithic landslide was also found beneath the left-wing of the dam. It can be argued that a major element of the failure was due to the unstable hillside of the extensive paleolandslide, but it is also important to note that there were plenty of dams built unknowingly against ancient landslides during this time that did not fail. Nonetheless, there are claims that the east abutment slide is the reactivation of a larger slide developed during the Pleistocene epoch (David, 2005). However, this type of investigation could not have been determined with 1920’s tools.

Despite the various claims and research, all engineers can attest that the lack of engineering geologic judgment and the defective foundation is the leading factor of the failure of St. Francis Dam. The westerly wing collapsed first and it is theorized that the dam was lifted due to the swelling of the conglomerate after the fault had permitted a gradual percolation of water and softened the bedrock. On the other end, the deep-seated landslide and upward pressure in the schist followed and broke the eastern wing (Henny, 1928). Furthermore, the destruction of the east occurred after the breaking of the west wing caused a great torrent of water and formed eddies below the right dam, which divided it into four major pieces. The fragments of the west wing were found a quarter to a half a mile from its origin while the east wing toppled onsite (Geiger, 1928). The remainder of the former dam was the central region, and it was the only section of the dam where drainage wells were placed and connected to an outlet below the dam. 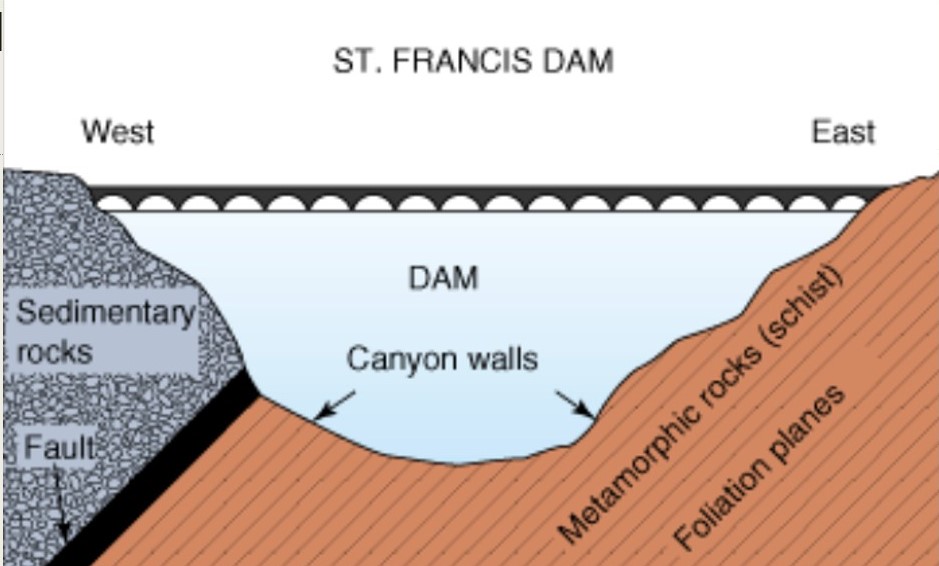 A simple depiction of the structure underneath the dam. The conglomerate is found in the western region on top of the fault line and the mica-schist extends from the east to the center region and bottom of fault line. 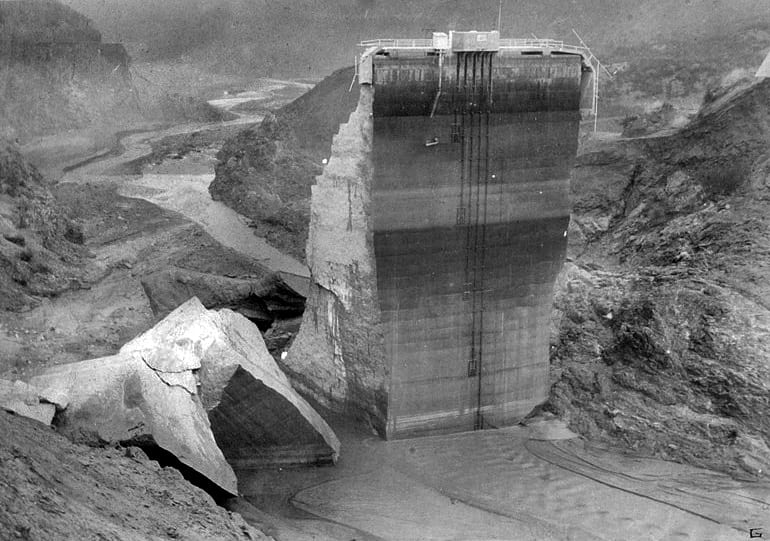 The only surviving remnant of the dam is pictured above. This was the only location that had drainage wells for water.

William Mulholland took complete responsibility for the error and remained lowkey shortly after the incident. Prior to the event, Mulholland had a strong dominance in the Bureau of Water Works and Supply and a great influence in accelerating the economy of Los Angeles. He was a California hero in addressing the controversial issues regarding the water crisis in the state (Water Education Foundation, 2020). On May 12, 1914, UC Berkeley awarded him an honorary doctorate for his success as he was a self-taught engineer, and he became a member of America’s foremost engineering society, Tau Beta Pi (Forgotten Tragedy: The Story of St. Francis Dam, 2018). Although he was not held accountable for the disaster, Mulholland resorted to self-isolation until his death in 1935. Mulholland’s story changed the course of construction and operation of major projects to not be left to the judgment of one man alone (Lin, 1928). 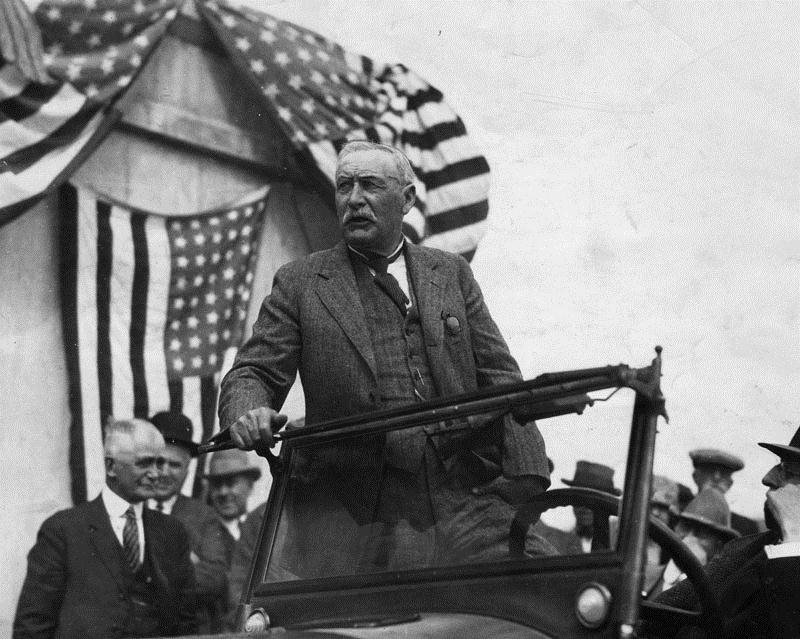 William Mulholland standing on top of an automobile at the Hollywood Reservoir and Mulholland Dam dedication.

V. Lessons Learned from the Failure of St. Francis Dam

The great disaster of the St. Francis dam caused millions of dollars for reparations. Hundreds of properties, jobs, and lives were lost, and no single eyewitness survived the night of the failure. A once fertile valley was destroyed, and the agriculture industry declined. However, the intensity of the dam collapse was not the controversial subject of the matter. Instead, the country was more astonished by the fact that a newly built dam, built by a reputable engineer, of massive concrete had failed overnight.

Perhaps the most significant lesson of the event was to take a geologist’s opinion when constructing a dam. Before the failure, there was an assumption that construction training is sufficient for Civil Engineers to answer geologic questions (Longwell, 1928). If site investigations were made prior to the construction, no geologist would support the building of the St. Francis dam without foundation treatment. Reports suggest that there were no geologists in the team of this project and no outside party was consulted to review the safety of the location (Geiger, 1928).

Today, Civil Engineers are required to take a course in the fundamental principles of geology with applications to engineering before attaining their degree. Undoubtedly, the failure of the St. Francis Dam showed that geology is a complex subject—the degree of perfection in dam design will not matter so long as the foundation is weak and leaky. Lastly, the methods of the 20th century do not compare to the tools we have today, but further studies showed that the dam failure could have been prevented even during operation given the proper instruments (Henny, 1928). Still, the history of St. Francis will always be remembered as the event that destroyed hundreds of lives in the young city of Los Angeles, ended William Mulholland’s dominance in water infrastructure projects, and highlighted the importance of engineering geology.