The United States Universities Council on Geotechnical Education and Research (USUCGER) Board has published a report focusing on the number of graduate degrees that were awarded in Geo-Engineering Programs during the 2018-2019 academic year.

In the present survey, the term Geo-Engineering refers to all the programs that include Geotechnical, Geological, and Geoenvironmental engineering studies. The degrees accounted for the study were both PhD and MS/MEng.

When it comes to MS/MEng degrees, the survey findings included 230 degrees, 72% granted to men, 28% to women while 23% awarded to URMs.

Information on whether institutions provide post-graduate placements for both PhD and/or MS/MEng graduates was also collected. 42% of the answers were positive, 29% were negative and 19% of the respondents stated that they did not know at that time.

The authors of the study recognize that there were certain limitations on the findings of the survey since 49% of the USUCGER membership responded. Nevertheless, according to the report, they represent a good sample of the graduate degree-granting Geo-Engineering programs in the US.

The current initiative is new and similar surveys will be conducted annually.

The USUCGER report is permanently archived using a DOI within Geoengineer.org. 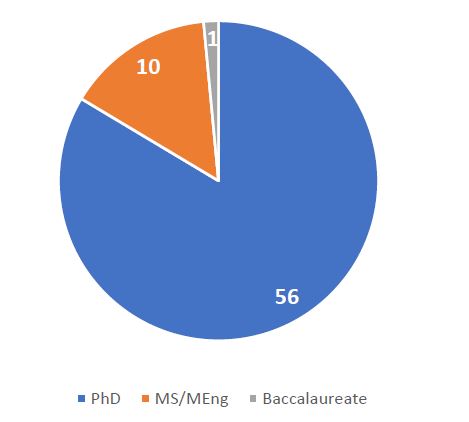 As we approach a year since the COVID-19 pandemic crisis broke out, we ask you to participate in th...

2012 Prize for Excellence in Teaching of Geotechnical Engineering has been won by Dr. John S. McCartney

The 2012 SP Prize for Excellence in Teaching of Geotechnical Engineering has been won by John S. McC...

Woman geotechnical engineer featured in Globe and Mail news media; shines light on the need for women representation in science and engineering

Globe and Mail news media published an article on the need for women in the fields of science and en...

The "Geo-Congress 2014: Geo-Characterization and Modeling for Sustainability" will take place in Atl...

Professor Jonathan Bray, from UC Berkeley, is among the 67 individuals elected to the National Acade...