At least 60 people have been reported dead and more than 950 injured after a M 7.0 earthquake struck offshore Samos Island, Greece, near the coastal areas of Turkey.

The seismic shock occurred on October 30, 2020, at around 11:50 UTC along a normal fault. The epicenter was located 19 kilometers northwestern of Samos Island, Greece. The quake can be characterized as shallow since it occurred at an epicentral depth of around 10 kilometers, according to the United States Geological Survey (USGS). Turkey's Disaster and Emergency Management Authority suggested that the mainshock was followed by more than 900 aftershocks, 42 of them measuring more than M 4.0.

The tectonic regime in the area is complicated. To the east, the Anatolian plate movement has created a series of right-lateral faults known as the North Anatolian Fault system. To the south, the African plate is subducting under the Eurasian plate beneath the Hellenic Trench.

The quake was felt in Athens, the capital city of Greece located about 260 kilometers away from the epicenter of the quake.

The earthquake caused infrastructure damage on the Island of Samos which has around 45,000 residents. According to recent updates, about 100 buildings have been damaged and a team of 46 engineers has begun evaluating their conditions. The affected structures include houses, churches and public facilities. The wall of a large, iconic church on Samos partially collapsed. Total failures were reported mostly in old and abandoned structures. Authorities warned people to stay away from old buildings and also avoid overcrowding due to the COVID-19 situation.

Unfortunately, 2 students passing by an abandoned house died after a wall collapsed sending them under the rubble. Rescuers rushed to the site and recovered their bodies but it was too late. Apart from the two unfortunate students, no reports for individuals trapped under the rubble have been issued yet. 9 people were injured and hospitalized with minor issues.

According to a local journalist, the impact on many businesses on the island will be catastrophic. "Many businesses will be going under after this," he said.

The roadways of the island have suffered critical damage after being covered by buildings debris and repair works will be required.

There were few reports of ground failures in Samos Island. Nevertheless, a stunning co-seismic landslide was caught on camera and uploaded on Facebook.

According to the National Observatory of Athens, satellite imagery collected from the Hellenic Mirror Site indicate that a beach located in northwestern Samos sank by around 9 centimeters as a result of the quake.

The island of Chios, located about 75 kilometers from the epicenter of the quake was also affected by the quake. Old buildings suffered severe damages including total collapses but, fortunately, there were no reports of casualties or injuries.

The island of Ikaria was highly impacted by landslides which caused severe ramifications on the road network. Mr. Politis, deputy mayor of a municipality in Ikaria mentioned that the main ground failures that struck the island are rockfalls.

The city of Ismir in Turkey is the 3rd largest city in Turkey and accommodates around 3 million people. It is located around 65 kilometers from the epicenter of the quake and was highly impacted.

Several buildings collapsed or experienced partial failures and numerous people were trapped under the rubble. A vast rescue operation that included more than 5,000 members immediately began to search and rescue the victims. According to recent updates, 58 people have been reported dead while the death toll is expected to rise since search operations are not yet finished. More than 100 people have been saved so far and 7 are hospitalized in critical condition.

The extensive damage caused in Izmir is probably associated with the soil layers that the buildings of the city are founded. Those layers may have amplified the seismic waves. According to the shakemap of the USGS, the Peak Ground Acceleration in the city was between 0.15g. and 0.20g.

Small Tsunamis triggered by the earthquake

The earthquake caused small-scale tsunamis that impacted both Samos and coastal areas of Turkey causing flooding and some infrastructure damage. In Izmir, part of the city flooded and some fishermen went missing.

According to a journalist in the coastal town of Sigacik, situated In Turkey, the waves triggered more damage than the earthquake as many buildings flooded. 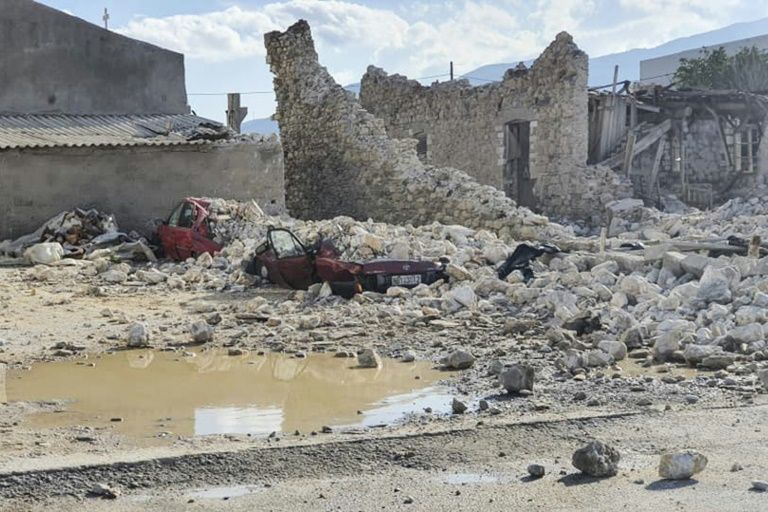 At least 31 people were reported dead and numerous were injured after a massive earthquake struck i...

A M 5.7 earthquake hit Turkey near the border with Iran resulting in at least 9 fatalities includin...

A strong earthquake hit at 12:25 local time, Saturday May 24th, in the Aegean Sea, with the epicente...