Scientists have shed light on the existence of so many volcanoes across a belt in Australia.

The east coast of Australia is characterized by numerous volcanoes that have erupted over the past millions of years. In fact, not all of them have been identified as of today. Their activity was far less intense than that of other notorious volcanoes on Earth and, hence, they currently mostly look like hills or normal mountains.

What is interesting is that the tectonic regime of the region does not justify any volcanic activity. Most volcanoes are formed near divergent or convergent plate boundaries as magma finds its way to the surface of the ground. However, the east coast of Australia is not located near any boundary of the Australian plate, hence, the existence of this volcanic chain had not been fully understood.

Some previous studies and models suggest that the volcanoes were formed by convection eddies (an eddy is the swirling motion and the current created in a fluid's turbulence flow) within the Earth's mantle. Other studies stated that east Australia lies over hot spots in the mantle from where the volcanoes form.

The research team with scientists from the University of Sydney, the Monash University in Melbourne and the GNS Science Research Institute in New Zealand, mentioned that none of these theories are completely accurate and conducted a thorough investigation to determine the origin of the volcanic activity in east Australia. Their findings were published in Science Advances.

Molten rock is accumulated beneath the Australian plate due to the subduction of the Pacific Plate under it. As the material reaches large depths (400-500km) it increases its temperature and is re-elevated to the surface of the ground through the (relatively) thinner east Australian coast. Moreover, the rocks that are pushed beneath the Australian plate are hydrous and rich in carbon, a fact that makes the zone prone to potentially explosive materials.

The study has created a new, more sophisticated model that agrees with the observational patterns and the spatial distribution of the volcanoes across the east Australian coast. Nevertheless, in terms of future eruptions, scientists made clear that it cannot predict when and where an explosion will occur.

The team plans to implement the model in other parts of the world where fuzzy volcanic activity has been recorded in an effort to explain each case individually. 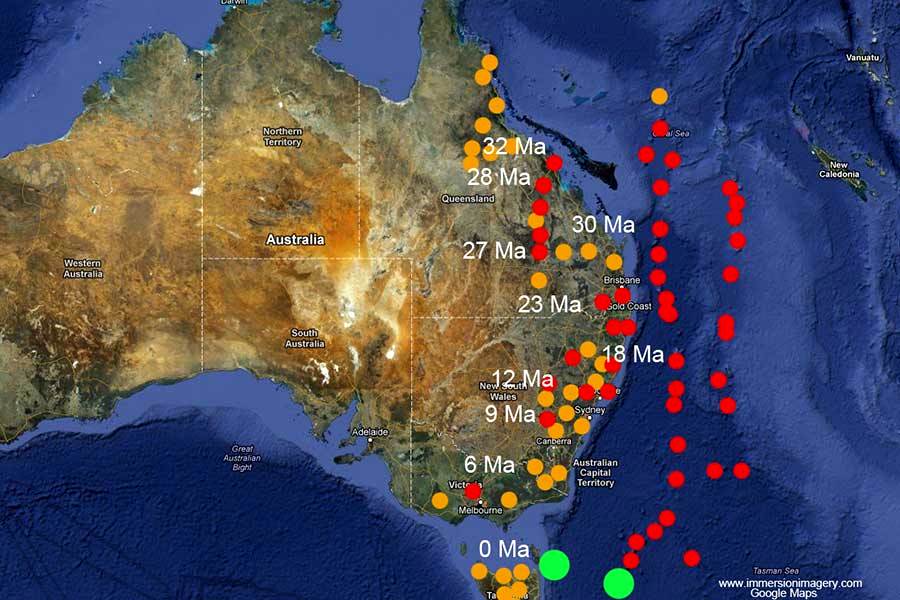