A massive quick clay landslide struck in a Norwegian village sweeping away buildings.

The landslide occurred in the village of Ask, located in the municipality of Gjerdurm on December 30, 2020. According to Toril Hofshagen, the regional head of the Norwegian Water Resources and Energy Directorate, the landslide is one of the largest quick clay failures that has occurred in Norway's recent history.

Quick clay is a clayey material with unique behavior since it experiences a significant loss of strength when it is disturbed. Quick clays are glaciomarine deposits that are mostly found in the Northern Hemisphere including many parts of Norway. Quick clay landslides have caused severe impacts on human civilization mostly due to their large size and the absence of an alert mechanism. To find out more about the properties of quick clays, click here.

A vast crater has been created on the site and more than 12 houses have collapsed inside it. Its size was reported to be approximately 700 meters long and 300 meters wide.

Hours after the initial failure, 2 more houses fell into the crater. The landslide is still unstable and has progressed retrogressively behind its head scarp. Some buildings are still hanging on the edges of the landslide's limits.

The American Geophysical Union (AGU) reports that the area is assumed to be of low hazard but lies near a medium-hazard area in terms of landslide potential.

According to the Norwegian Police, 7 people were reported dead, numerous were injured and hospitalized while 3 are still reported missing. More than 1,000 locals were evacuated from the village of Ask. Erna Solberg, the Prime Minister of Norway, commented on the disaster: "It hurts to see how the forces of nature have ravaged Gjerdrum. My thoughts go to everyone affected by the landslide."

Rescue operations were held back due to the harsh weather conditions and the instability of the ground. For several days, authorities and rescue teams (including helicopter missions) searched the area to find survivors and are making "absolutely sure that all relevant cavities have been scanned before we end the effort." Heavy machinery could not be deployed due to the risk of further landsliding.

Local residents stated that the failure felt like an earthquake and that the tremor lasted for a long time period. The total cost that the insurance firms face could reach about $107 million, however, the overall assessment of the damage has not been made yet. A lot of uncertainties still exist regarding property damage (e.g. vehicles destroyed).

Engineers and geologists are still on the scene assessing the conditions of the ground. 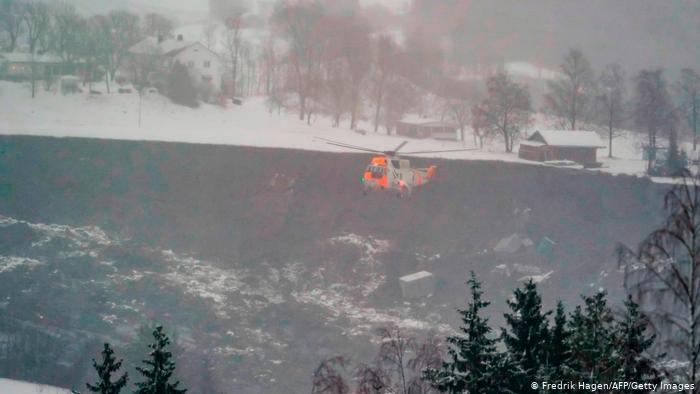 Landslide hits a residential area in Norway
The Telegraph

The phenomenon of Quick Clays

Introduction Quick clay refers to a specific type of clayey material that experiences a significa...

Eight residences have been swept away by a vast landslide that struck in Norway. The incident occur...

Massive landslides in Palu after Mw 7,5 earthquake in Sulawesi

A landslide that struck near a village in Papua New Guinea has resulted in, at least, 12 casualties...