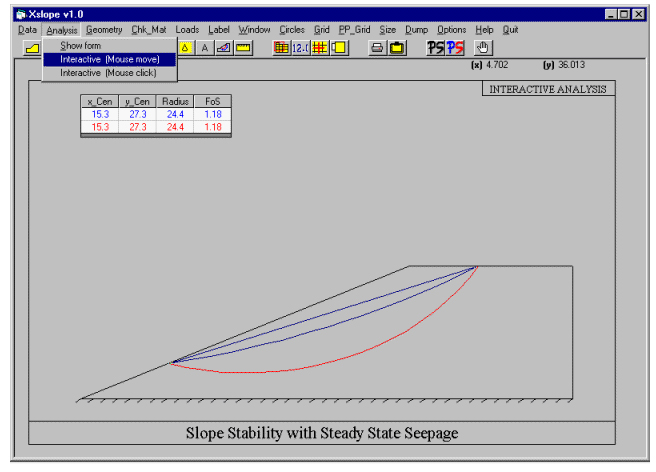 XSLOPE for Windows computes the stability of an earth slope using Bishop's (1955) simplified method for circular failure surfaces or Morgenstern and Price's (1965, 1967) analysis for non-circular failure surfaces. XSLOPE has been developed and modified over the last twenty years with the first DOS version made commercially available in 1982.

XSLOPE for Windows computes the stability of an earth slope using Bishop's (1955) simplified method for circular failure surfaces or Morgenstern and Price's (1965, 1967) analysis for non-circular failure surfaces. XSLOPE has been developed and modified over the last twenty years with the first DOS version made commercially available in 1982.

The slope may be divided into a number of different soil layers with different properties. In the Bishop analysis a circular surface of rupture is assumed and then the equilibrium of the sliding mass of soil is considered by dividing this mass into a number of slices. This process is repeated for a large number of circles and the minimum factor of safety determined. Failure by clockwise or anticlockwise rotation can be considered. The effort in locating the critical circle is considerably reduced by employing the option to automatically generate the centres and radii for a specified number of circles. The algorithm used by XSLOPE provides a very good estimate of the location of the critical centre for a wide variety of problems. This initial estimate can then be used to size and locate a rectangular grid of circle centres.

The Morgenstern and Price analysis is fully interactive, i.e. the non-circular failure surface is defined and modified by using the mouse. As the surface is updated the analysis is performed and the results continually updated and tabulated on the screen.

This flexibility in pore pressure calculation provides a mechanism for analysing any pore pressure regime. In addition, the use of a pore pressure grid enables the artesian condition to be analysed without the need of employing the "messy" alternative of specifying several piezometric surfaces. If a finite element seepage analysis has been performed using program FESEEP for Windows the pore pressures from this analysis can be used in the stability analysis.

FESEEP for Windows places a rectangular overlay or "window" on the finite element mesh using the user-specified coordinates of the bottom left hand corner and the dimensions of the overlay. Once the overlay has been positioned a rectangular grid is generated within the overlay. This grid has a user-specified number of divisions in the horizontal and vertical directions. The nodal values of pore pressure from the finite element analysis are then mapped onto the grid. In many problems the size and detail of the geometric model used in the stability analysis will differ from that used in the seepage analysis. Therefore, the overlay would normally be placed over a subset of the seepage model which represents the region to be modelled in the stability analysis. There are no restrictions in the size or placement of the overlay. The pore pressure grid can then be used by program XSLOPE. The grid is positioned within the stability model by specifying (as part of the data for program XSLOPE) where the bottom left hand corner of the grid should be placed and the file that the pore pressures are stored in.

External normal and shear tractions can be applied to segments along the surface of the slope. The effect of an earthquake is modelled by applying a set of horizontal and vertical forces at the centroid of each slice. These forces are calculated using the horizontal and vertical seismic coefficients which are assumed to vary with depth.

Several features of the program are worth highlighting:

-The circles are sorted into ascending order of factor of safety before being written to the solution file. The sorting routine used is very efficient and was published by Houlsby and Sloan (1984).

-The centres and radii for a user-specified number of circles can be generated automatically. The algorithm provides a good initial estimate of the location of the critical centre. This initial estimate can subsequently be used to determine the location and size of a user-specified grid of circles. Using this approach the critical circle can be determined very efficiently.

-A comprehensive summary table may be generated for a circle, which lists for each slice the values used in computing the factor of safety. This provides the last essential step in design, in which the values of weight, normal force, pore pressure etc. for each slice in the critical circle are checked before reporting this circle's factor of safety.

-Interactive analysis can be performed. After the entry and exit points of the circles on the surface of the slope are defined circles are automatically analysed by moving the mouse if the Analysis-Interactive (Mouse move) option is selected. If the Analysis-Interactive (Mouse click) option is selected then a circle is analysed only when the left button on the mouse is pressed. During the interactive analysis a record is kept of the circle analysed with the minimum factor of safety. This circle is plotted in red and its factor of safety value is tabulated in red.

-Non-circular failure surfaces can be analysed interactively using the Morgenstern and Price analysis. The non-circular failure surface is defined and modified by using the mouse. As the surface is updated the analysis is performed and the results continually updated and tabulated on the screen. Four side force functions are considered and the lines of thrust from each of these assumptions can be plotted.