GEOSTASE® is a 2-D limit equilibrium slope stability analysis software program developed by Dr. Garry H. Gregory, Ph.D., P. E., D.GE, Principal Consultant with GREGORY GEOTECHNICAL (GREGEO). The name GEOSTASE® is an acronym for General Equilibrium Options for STability Analysis of Slopes and Embankments. The name is a United States Registered Trademark (Registration No. 4,000,187) owned by Dr. Gregory. The program was written in Visual Fortran (double precision) using the Fortran 95 and later language versions. The program was developed for the Microsoft Windows® operating system and explicitly accommodates either English or SI units. GEOSTASE® version 4.30.10 is being released to the general user public on or about January 8, 2018. Dr. Gregory has been using the program on all his slope stability analyses for more than 10 years, involving hundreds of complex analyses. The general features of GEOSTASE are briefly described below.

GEOSTASE is offered as a perpetual license with hardware-key activation which allows the software to be utilized on multiple computers by installing a key on the active computer during use. The hardware keys are driverless. The license allows the software to be installed and used at any location on any compatible computer by inserting a hardware key during use. The software will be available from the GREGORY GEOTECHNICAL website for download by licensed users. A standard level of support via email (preferred) and/or telephone will be provided at no additional charge if the user maintains the latest version of the software.

General - The program contains options for analysis of slope stability using a variety of popular limit equilibrium methods including the Spencer Method, Morgenstern-Price Method, Simplified Bishop Method, Simplified Janbu Method, Simplified Janbu Corrected Method, United States Army Corps of Engineers (USACE) Modified Swedish Method, and the Lowe and Karafiath Method. The Spencer method contains options for parallel and bi-linear side force functions and the Morgenstern-Price method contains options for a variety of side-force functions including half-sine, clipped-sine, parabolic functions, and user-specified functions. Standard search options include circular, random, wedge, block, and composite surface options. The software also includes a non-circular refined search option, referred to as the ZRSAUTO search option. ZRS is an acronym “Zone Reduction and Shifting,” which is a highly sophisticated pseudorandom searching technique. There is an option for generating circular surfaces tangent to a user-specified subsurface boundary or to a specified offset from the boundary. Trial slip surfaces that begin or terminate on vertical boundaries are accommodated. Generating trial slip surfaces on vertical subsurface boundaries are allowed. The program includes an option to “turn off” or “suppress” input of features such as reinforcement, water surfaces, seismic forces, and similar items so that these items are not included in the analyses, but are still available in the input and can be turned back on by the user whenever desired.

An option for orienting the slope in either the right or left direction is included. The software can accommodate negative coordinates and true vertical boundaries. The program output provides nominal statistical data for any search including output of standard deviation, coefficient of variation, and minimum, maximum, and average factor of safety (F) values for all valid surfaces from each search.

Water Surfaces and Pore-Pressures – GEOSTASE includes options for piezometric surfaces, phreatic surfaces (with and without correction factor), ru (pore-pressure ratio) option, constant pore pressure option, and artesian pressure option. The program allows these options to be selected separately for each soil layer. Unit weight of water can be user selected or using standard default values. The surcharge load of ponded water on the ground surface is automatically included and an option is provided to include or not include pore pressures from surface water. The program is able to automatically generate a water surface coincident with the ground surface or at a specified offset below the ground surface.

Reinforcement and Loads - The software includes explicit options for reinforcing elements and loads including piers/piles, tiebacks (anchors), soil nails, planar reinforcement (geogrids), applied forces, line loads, a generic reinforcement option (to model virtually any type load and non-linear distribution), distributed loads including uniform, triangular, and trapezoidal loads applied at any orientation and anywhere within the profile including on surface and subsurface boundaries or anywhere within the soil mass not on a boundary. Application of reinforcement forces includes options for both “Method A” (non-factor of safety dependent) and “Method B” (factor of safety dependent) methods. There is an option to distribute reinforcement forces to adjacent slices rather than on just the intersecting slice and the distribution distance can be user selected with a distribution factor.

Tension Cracks and “XCLUDE” Lines – An option is included to explicitly include tension cracks in the profile with user-specified percentage of water fill, including dry. A feature for allowing user-specified zones or areas to exclude from the search is provided in the form of XCLUDE lines.

Seismic Analyses – The software includes options for application of pseudo-static horizontal and vertical coefficients (kh, kv) and includes options for calculating the seismic yield coefficient (ky). A seismic displacement option is included for calculating the probable maximum displacement of the slope from a seismic event using Newmark’s simplified screening analyses.

Multi-stage seismic analyses options are included using the Duncan, Wright, and Wong (1990) and the VandenBerge and Wright (2016) interpolation for both 2-stage and 3-stage analyses with full text output of each stage. An alternate 3-stage method is also included. A multi-stage post-seismic analysis option is also available. 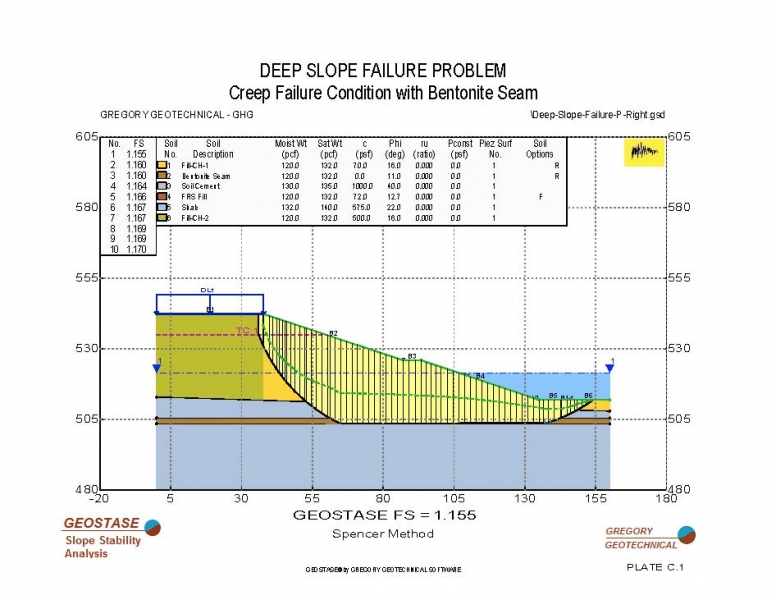 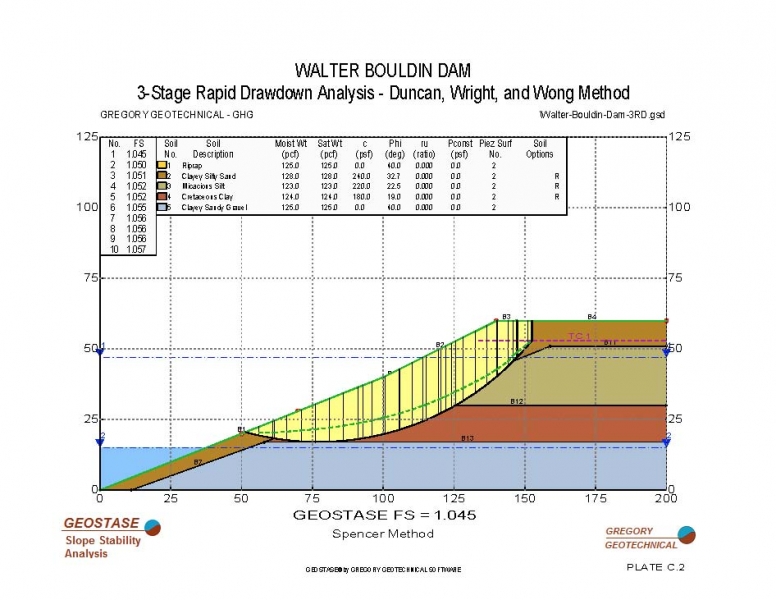