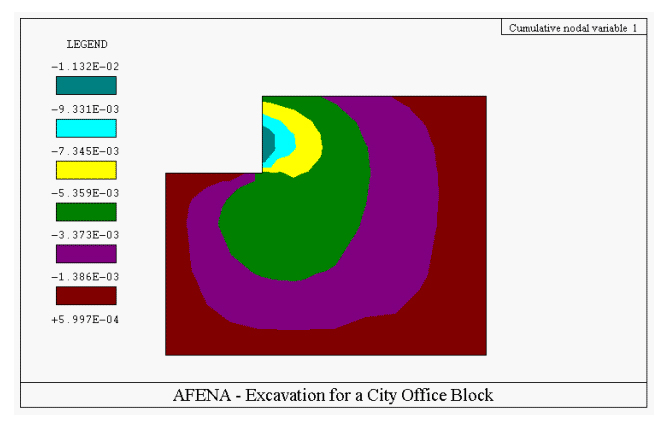 The finite element program AFENA may be used for the solution of boundary and initial value problems using finite element techniques. The program contains a comprehensive element library and a variety of solution algorithms.

The finite element program AFENA may be used for the solution of boundary and initial value problems using finite element techniques. The program contains a comprehensive element library and a variety of solution algorithms. Although it was designed specifically to solve problems in geotechnical engineering, AFENA is also a general finite element program in the sense that it may be used to obtain numerical solutions to problems in solid mechanics, particular problems in fluid mechanics, coupled problems such as the analysis of soil consolidation and thermoelastic deformations, as well as other more general field problems. These applications may involve either one, two or three spatial dimensions as well as the time domain.

A special feature of the main finite element processor is the incorporation of a macro instruction language which can be used to construct specific algorithms, i.e. AFENA is a variable algorithm program. You can create your own solution algorithm by specifying, in the appropriate order, a set of macro instructions selected from a list of possibilities. Each macro commands acts as a signal to the program to carry out a predetermined sequence of computations.

In finite element analysis a system of linear equations in the nodal variables is developed. In AFENA these equations are solved using a "skyline" solution technique. The system of equations may be either non-symmetric or symmetric. In the latter case economies in storage and computation can be achieved by exploiting the symmetry of these equations. The AFENA finite element module stores in the computer's central memory all arrays except possibly (in the case of larger problems) the global stiffness matrix. On most computers this means that the solution is obtained efficiently and quickly using in-core, symmetric or non-symmetric equation solution techniques.

Features of the finite element module that are particularly relevant to Geotechnical Engineering include: non-linear material models such as ideal solids that obey either the Mohr-Coulomb or Tresca failure criteria and that deform plastically and may flow according to associated or non-associated flow rules, fully drained, undrained and consolidation analyses of soils that are represented by the Modified Cam-clay model, the analysis of ubiquitously or discretely jointed rock masses, problems involving soil or rock bodies that are subjected to non-zero initial stresses prior to the application of further loading, and problems involving the removal or addition of material with self weight (i.e. excavation and fill problems).

The development of AFENA has taken place over a period from 1979 with the latest MSDOS version numbered 5.1. In September 1999 a Windows (95/98/NT) version (1.0) was made available. The AFENA package includes a number of programs that support AFENA as either pre- or post- processors. AFENA has limited mesh generating facilities, but the support software considerably enhances the overall capabilities. The support programs are briefly described below.

GENTOP is a versatile two-dimensional mesh generator for general plane shapes. The elements generated may be either 3, 6, 10 or 15 noded triangles, or 4 or 8 noded quadrilaterals. The generation of dual nodes for joint elements and special transition elements is alos possible. MSDOS and Windows versions are available.

FELPA is a graphics pre- and post- processor for AFENA. It can be used to check the mesh data for one- and two-dimensional problems and it also provides the facility for viewing the results of a finite element analysis. It can produce a variety of plots including: the mesh geometry and boundary conditions, the nodal displacement vectors, stress rosettes at the element Gauss points, the deformed shape of the outline of the body analysed, deformed mesh plots and contour plots of displacement and stresses. MSDOS and Windows versions are available.