As a Rocscience customer, using Slide2 and RS2 to model slope failure in slopes, dams, and embankments is just like any other day. Not so typical, and perhaps hard to believe, is the use of the software to help model the surface of Mars, specifically newly recognized impact crater morphology referred to as a Peripheral Peak Ring, or PPR.

But that is exactly what Jason Nycz, from the Department of Geoscience at the University of Calgary, did in a study aimed at describing, characterizing, and developing a working, plausible formation model for PPRs. In the study, Nycz was able to validate the proposed PPR formation model by inversely modeling and analyzing the formation as a transversal block slide in Slide2 using topographic inputs from Digital Elevation Models (DEM) of an impact crater as well as reasonable rock parameters. Not only did the study show the PPR formation model to be valid, it also provided insight into the strength parameters of the uppermost layers of the Martian crust.

Unlike geotechnical engineers, planetary scientists don’t have the luxury of ground truthing observations when studying an object such as Mars remotely from space. For example, when modeling the lithology of an earth structure, it is possible to physically analyze the site to get confirmation. In the case of Mars, however, where information about its crustal layers is difficult to obtain and limited, it is only with the help of inverse modeling tools such as Slide2 that we can get a better understanding of its morphology.

Peripheral Peak Rings, or PPRs, are a newly recognized type of Martian impact crater morphology. The PPR is a topographically symmetric ring that is roughly concentric to the crater rim. PPRs have been found to occur in craters having a diameter between 4 and 200km and are thought to be caused when instabilities in the rim after crater formation cause all or a portion of the rim to detach and slide into the crater.

For this study, Nycz chose the Tooting impact crater because it represents one of the youngest large, most-preserved complex impact craters on Mars. Other reasons for its selection were a well-developed monolithic PPR and the availability of DEMs completely covering the site.

As the first part of the study, a simulation of the formation of the Tooting PPR and the resulting morphology was modeled as a translational block slide. The modeling process involved three phases:

Reconstruction of the original crater rim to its state before the PPR was formed, beginning with consideration of the present-day topographical profile since a plausible model for PPR formation must result in the final, observable profile.

Detachment of the PPR from the crater rim, sliding laterally and downward toward the crater centre. The result is an intermediate step in the formation of the PPR.

Transformation of the intermediate profile into the observed profile.

Development of the model involved several conditions or constraints, including consideration of the position, height, and shape of the original crater rim, which led to fitting the crater slope to match the slope of profiles through the unslumped rim of the crater. The most important and also most difficult constraint, however, was the need to conserve unit volume throughout the entire PPR formation process. By going through these steps and using these constraints, Nycz was able to arrive at a profile or model that simulates the Tooting crater rim prior to the PRR.

The Slide2 Model and RS2 Validation

Once modeling of the PPR formation was complete, the restored profile was used to create an initial input model in Slide2 to determine what rock properties and under what subsurface conditions a factor of safety (FOS) of less than one could exist (Figure 1). Initial strength (friction and cohesion) parameters were entered in Slide2 for each material/lithology in the model, and a probabilistic analysis was run to determine the minimum strength for rim stability of each material.

In addition, a sensitivity analysis was run, which showed that the FOS was overwhelmingly sensitive to the prime strength parameters of the slip plane. To model failure then, slip plane and other parameters were calibrated until the FOS was reduced to below 1.0 and failure was achieved.

As further validation, the Slide2 model was imported into RS2 and a finite element (FE) analysis was run. As shown in Figures 2 and 3 below, the RS2 model predicts many of the features observed in the PPR formation model. In addition, the RS2 model agrees with many of the features concluded by the analysis of the Slide2 model, most notably the detachment of a single monolithic PPR that slides craterward along the sub-horizontal joint. Finally, the deformation contours predicted by the RS2 model also show a clear resemblance to the PPR generation model and the final observed topography of the Tooting PPR. 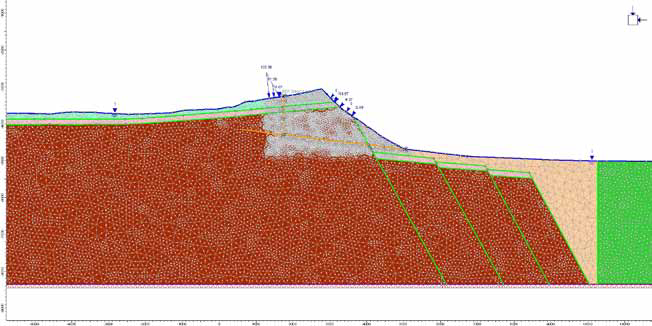 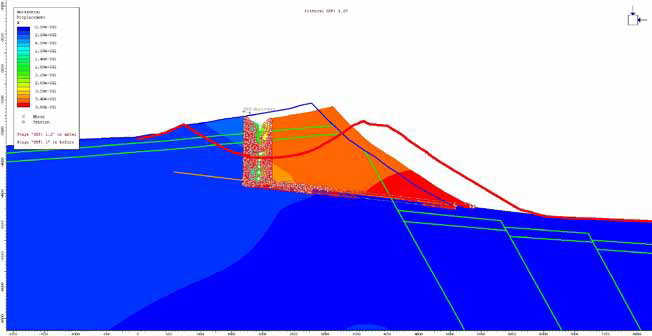 As shown above, slope stability modeling using Slide2 and RS2 confirmed that the proposed Tooting PPR formation model is both possible and realistic. At the same time, inverse modeling using Slide2 made it possible to gain valuable insight into the strength parameters of the uppermost layer of the Martian crust, thus advancing research in Martian crater morphology. For the Rocscience customer however, perhaps the most significant takeaway is proof of the products’ support for a wide and impressive range of applications, making them the most comprehensive and flexible products available on the market.

Try Slide2, RS2 or any other Rocscience program with a free two week full version trial.

How To Efficiently Speed Up Mesh Generation

PLAXIS 3D is a very powerful tool that can prov...