At least 75 people, including 50 tourists, have been evacuated in Mont Blanc, northern Italy after a glacier was found at risk of collapse.

The Mont Blanc is the highest mountain in western Europe reaching an altitude of 4,800 meters. It stands in a range between Italy and France and accommodates around 4,000 glaciers.

Italian authorities recently reported that the Planpincieux glacier, situated on the Grandes Jorasses park in Aosta Valley region, is on the verge of collapsing after experiencing a series of heating (during the day) and cooling (during the night) cycles. At this point, a vast volume (about 500,000 cubic meters) is considered unstable.

The vulnerable ice mass is elevated between 2,600 and 2,800 meters above sea level. The sliding may occur between the ice mass and the bedrock that lies underneath the glacier. This contact surface creates a weak plane at which the vulnerable mass can slide and collapse.

According to Fabrizio Troilo, from the Montagna Sicura (Secure Mountain) Foundation, the risk of failure became severe in April but the conditions deteriorated in late July-early August. The glacier is currently moving at a very high velocity.  "The moving speed is much higher (than before). We can see this from photographic monitoring, moving more than one meter a day," Troilo mentioned.

Unfortunately, officials have detected water within this surface, a fact that deteriorates the stability of the glacier. Water derives from continuous ice melting and it is trapped in the glacier building up excess pore-water pressure that tends to destabilize the ice mass. "Our problem now is that not enough water can escape, it stays under the glacier like a bubble and risks lifting it up" Valerio Segor, natural risk management director of Aosta Valley region, stated.

The glacier has been declining the past time period as a result of global warming. Of course, it is not a unique case since 65-90% of the glaciers worldwide may shrink as of 2100 depending on how humanity will tackle global warming.

A potential collapse could occur rapidly a fact that would lead to devastating infrastructure damage and casualties if precautionary measures were not taken. Officials suggest that in case of a failure, the ice mass would reach the roads beneath in less than 2 minutes.

Experts have been monitoring the glacier meltdown for 7 years to derive the velocity that the ice retreats. In September 2019, the area was also evacuated after an ice mass with half the volume of the current one was found to be vulnerable. 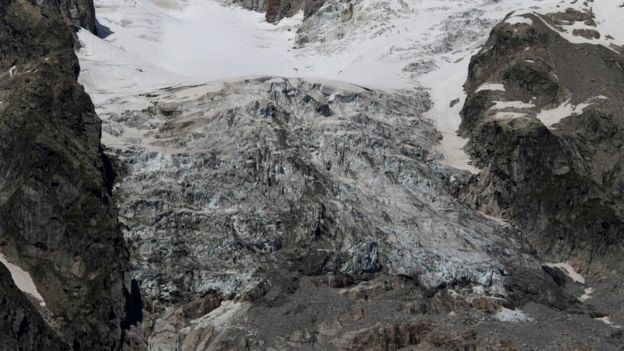