Mega-tsunami generated by an ancient landslide in Mars

According to research from the University of Milan “Bicocca” in Italy, a mega-tsunami was generated by a massive landslide in Mars, billions of years ago.

The study, recently published in Planetary and Space Science Journal, suggests that the landslide occurred in Olympus Mons, a 22-kilometer height volcano situated on Mars. Landslide phenomena are common in Olympus Mons and scientists have recognized massive slides stretching for more than 500 kilometers.

Martian volcanoes are generally much bigger (10-100 times) than those on Earth. This is a result of larger lava flows, higher eruption rates and lower gravity.

Dr. Fabio Vittorio De Blasio, a researcher at the University of Milan “Bicocca” and the author of the study, collected and analyzed satellite imagery data and, considering the topography of the planet, he found proof of an ancient, massive landslide. Data showed that the scar of the slide ranges between 595 and 692 kilometers. Given these facts, it may be the longest landslide ever measured in the solar system.

Numerical modeling and analytical calculations showed that a sediment-rich tsunami was triggered, proving the presence of water on the Martian region.  "A possible explanation for the presence of water is that the front was traveling across an outlet of the ancient Martian ocean which, consequently, must have persisted when the landslide event took place," the study mentions.

Satellite imagery proved the presence of ridges on the debris deposit area. As rock deposits reached an old ridge known as Acheron Dorsum, debris began to rise and high pressures were applied, generating new ridges until the flow decelerated and eventually stopped.

The generated tsunami hit the Acheron Dorsum and coarse material began to settle creating a sandy layer. However, clayey soils traveled further creating mudflows that propagated at very high velocities (around 180km/h) reaching distant areas. This behavior is radical and unexpected on the Earth's surface but, according to computer simulations, the course of the material on Mars was found to be realistic due to the lower gravity of the planet.

An issue that remains unresolved is the nature of the water deposit. According to De Blasio, the findings suggest that the presence of an ocean is a likely scenario, however, it is probable that the water deposits could have existed as part of a network of lakes. Another, less likely scenario, is that the water may have existed in the base of Olympus Mons in the form of ice and melted when the landslide occurred triggering the massive tsunami.

What is certain is that verifying the past hydrological characteristics of Mars is of great importance to understand the evolution of the planet. Therefore, such research sheds light on critical phenomena and provide great evidence to be further studied in the future.

Watch in the Media section below an interesting video on the characteristics of Olympus Mons. 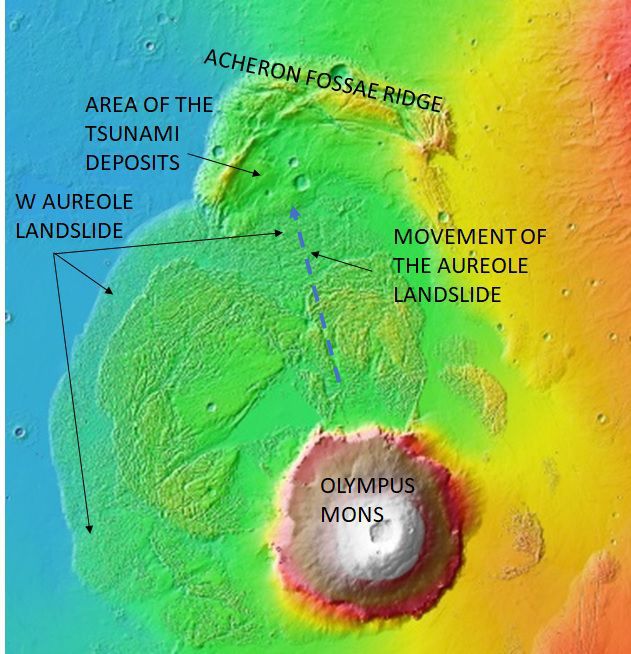