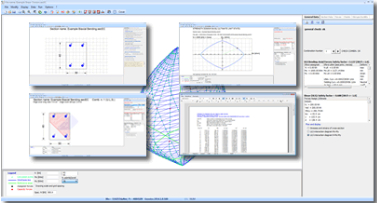 Software for the calculation of reinforced concrete section according to EN 1992-1-1 and EN 1998-1 and eventual national application annexes.

Software for the calculation of reinforced concrete section according to EN 1992-1-1 and EN 1998-1 and eventual national application annexes.
This software is a standalone application for checks of reinforced section belonging to beams, columns and walls. In seismic checks is considered the class of ductility demand (DCL, DCM or DCH) and whether or not the section is within a critical region of the member. If the checks are not seismic you must select the low ductility class (DCL) and so only EN 1992-1-1 is applied.

RC-SEC-EN performs checks for:
Ultimate Limit State (ULS):
• Uniaxial or biaxial Bending with or without axial force (§6.1 EC2-§5.4.3 EC8). It is also provided the eventual design of longitudinal and/or transverse reinforcement.
• Interactions domains N-Mx, Mx-My, N-Mx,My, with numerical results and graphical representation.
• Uniaxial and biaxial Shear (§6.2 EC2-§5.4.3 EC8) and Torsion (§6.3 EC2) force, with eventual design of stirrups.
• Instability by the method based on nominal curvature with uniaxial or biaxial bending. The calculation of curvature is performed according to equation (5.34) EC2 or by diagram moment-curvature (also in biaxial bending).
Serviceability Limit State (SLS):
• Limitation of normal stress (§7.2 EC2) by bending moment and/or axial force (performed methods: simplified, AAEM, EM).
• Limitation of Crack widths by means direct calculation according to §7.3.4 EC2 .
• Limitation of deflections of a beams (isolated or extracted from a frame) by double integration of curvatures and considering cracking, creep and shrinkage.
Ductility control:
• Direct check of curvature ductility factor (§5.2.3.4 EC8) by moment-curvature diagram (uniaxial or biaxial) taking into account (or not) of the eventual confining effect of hoops.
CROSS-SECTION TYPE
A set of practical cross-sections ("Predefined") like Rectangular, T, L, Flanged and Circular can be used as well as a free shape cross-sections ("General") formed by one or more concrete regions (polygonal or circular, full or empty) with free positioning of longitudinal steel bars and stirrups.
For Predefined cross sections is provided a faster input and the ability to perform the checks but also a first automatic design of reinforcement (for bending and/or shear forces) for a set of uniaxial combinations (up to 60) of internal forces. A special input is provided for rectangular section od columns and walls (especially for seismic checks). For general sections is also possible, once defined the geometry of the section, to check or design the envelope of reinforcement in a single calculation cycle up to 60 combinations for each of the above types of combinations (ULS and SLS).
For general section type is also possible to import geometry of concrete and longitudinal bars (diameters and positions) from a *.dxf file.
CHECKS
ULS checks are performed by determining of the bidimensional interaction domain for uniaxial forces N-Mx, and of the threedimensional domain for biaxial bending N-Mx-My. For each design combination the program calculates:
• Axial force and bending moments od resistance, in reference to the assumed stress path.
• Ultimate position of the neutral axis.
• Stress and strain at ULS of all bars and vertices of the concrete section.
• Shear-torsion checks.
• Graphics of interaction domains.
• Stability analysis for one span column by nominal curvature method
SLS checks involve the determination of the following results:
• Normal stress in all bars and vertices of concrete section.
• Neutral axis position.
• Crack widths.
• Axial strain and curvature (AAEM (Age Adjusted Effective Modulus) method or EM method.
• Deflections in a beam-column isolated or belonging to a frame.
INTEGRATED TOOLS
In separate windows it is possible to run the following tools to perform:
- Definition of Creep and Shrinkage coefficients according to §3.1.4 EN 1992-1-1 to use with AAEM or EM methods in Serviceability Limit State checks.
- Definition of Concrete Cover according to §4.4.1 EC2-1 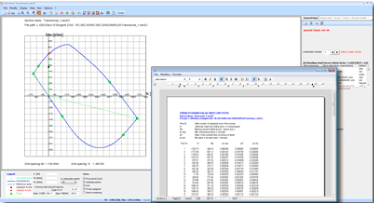 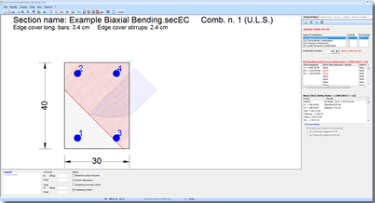 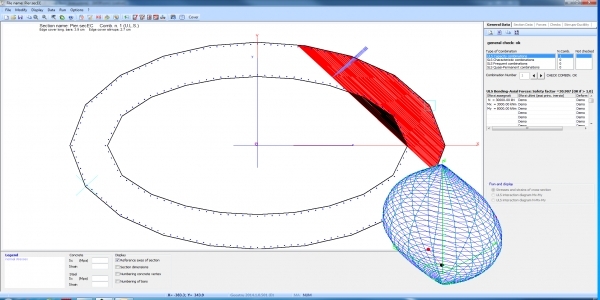 Principal Considerations in Rock Engineering Practice and Contributions from Africa