Go to the beginning 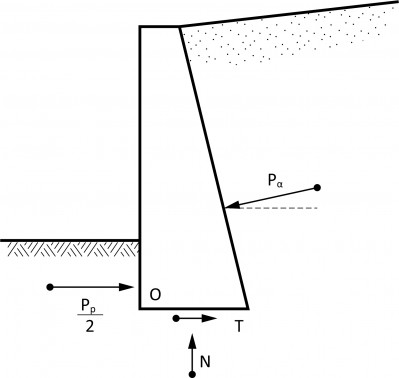 The aforementioned principles regarding gravity walls apply. The special feature of cantilever walls is that the part of the earth fill which is under the base is considered as a part of the wall, and thus the active earth pressures are considered to be applied on virtual plane BB’. Also, it is not given that this type of walls will undergo sufficient deformations so that the active earth pressure state is achieved. 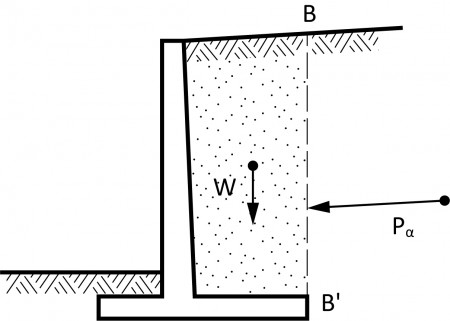 The stability of this type of walls is entirely a result of the passive resistance of the soil in front of the wall. It is assumed that the wall tends to rotate around a point C near its base. Below this point, it is assumed that passive earth pressures are developed. It is considered that their resultant, R, acts on point C. The passive resistance, which acts in front of the wall, is typically divided by a safety factor, F’ and usually we take F’=2. The embedment depth, d, is calculated by taking the moment equilibrium with respect to point C. Thereafter, the embedment depth is increased by 20% to allow for the development of the resultant, R. This type of walls are typically used for temporary structures. 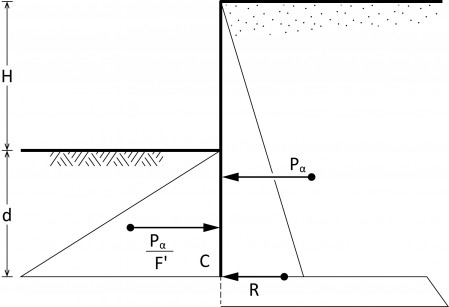 The stability of this type of wall is a result of the passive resistance of the soil, in front of the wall, as well as the traction force of the anchoring system, T. 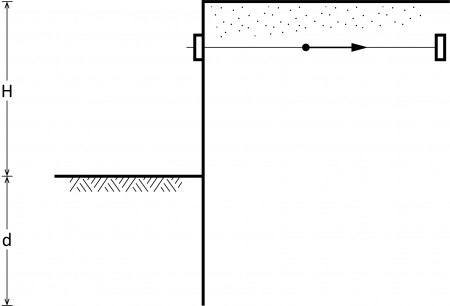 The behavior of this type of walls is complex and for their analysis, simplification assumptions need to be made. There are two main methods of analysis:

In this method, the assumption is made that the embedment depth isn't large enough and thus the lower end of the wall is free to rotate. Passive earth pressures are developed only in front of the wall, and considered in calculations divided by a safety factor F’=2. The embedment depth is calculated by taking the moment equilibrium with respect to the point of anchorage. Following the calculation of d, the anchoring force, T, per meter of the wall, is calculated by considering the horizontal force equilibrium. Finally, the moment diagram can be generated, and the maximum moment defines the design of the dimensions and reinforcement of the cross section of the pile-wall. Similarly to the previous case, it is recommended that d is increased by 20% as a precaution to account for the risk of a potential increase of the wall height H, which can result from weathering and/or erosion of the soil material.

In this method, the assumption is made that the embedment depth is sufficiently large that prohibits the rotation of the base of the wall. In this case, the passive resistance in front of the wall is considered without a factor of safety. Moreover, a resisting resultant force is also considered as acting at the base of the wall. This method requires more elaborate calculations and typically results in smaller values of bending moments.

Values for (φ,δ) for Flexible Walls

Table 1 presents values for unit weight and earth pressure coefficients for various types of soils. For diaphragm cantilever walls it is unlikely that friction between the soil and the wall will be developed because the wall is expected to settle along with the earth fill (small bearing capacity). Therefore, it is preferable to assume δ=0 and use Rankine’s theory. For anchored diaphragm walls, the values illustrated in Table 1 can be used. Table 2 provides some useful information for various types of diaphragm wall, typically used in the USA. The unit conversions between British and SI are: 1 in=2.54 cm, 1 in2 = 6.45 cm2 , 1 in3 = 16.39 cm3, 1 in4 = 41.62 cm4, 1 lbs = 0.454 kg, 1 psi = 0.07 kg/cm2. 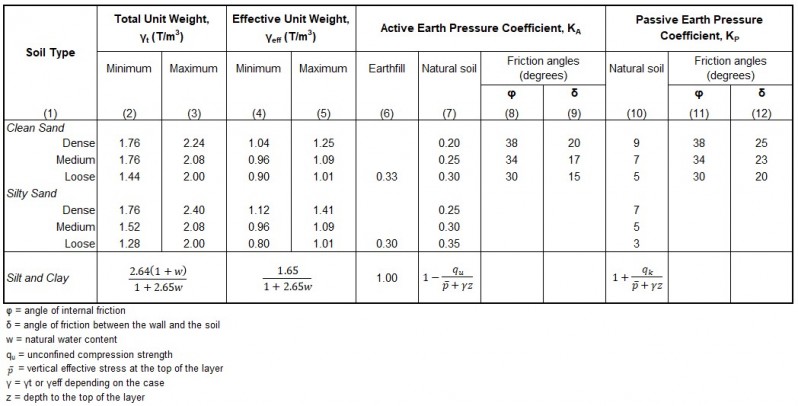 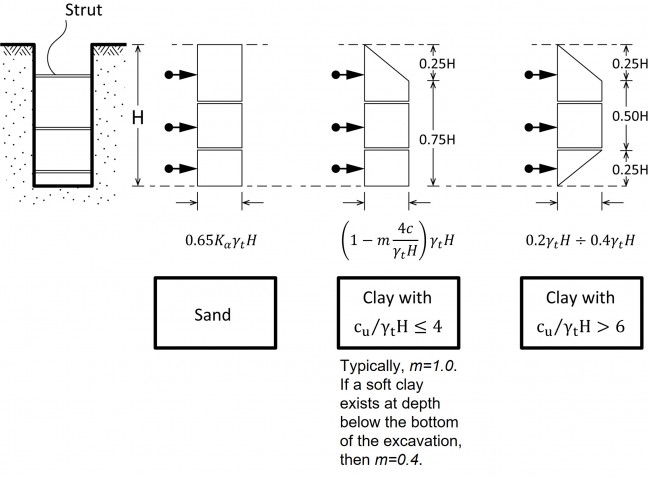 Problem 7.1 For the retaining wall shown in the figure below, calculate the active earth pressure...