As part of a new power plant at the E.ON site at Maasvlakte, Rotterdam, a fly ash silo was built. The reinforced concrete structure had a total height of 55 m and a diameter of 24 m. The silo was constructed on a 2.5 m thick concrete base slab with a diameter of 32 m, while the foundation was comprised of 59 large diameter bored piles (Ø1.5 m). To inform the foundation design, Cone Penetration Tests (CPT) with depths varying from 40 to 70 m were performed. In addition, a borehole was carried out and undisturbed samples were taken for geotechnical engineering laboratory testing. Based on the CPT data and borehole logs the soil profile was determined, as shown in Table 1.

Based on the pile and soil properties and characteristics, the pile tip level was set within the second sand layer (Sand II, Elevation -29m), while the calculated design pile bearing capacity was estimated to 11.5 MN. The majority of the settlement of the pile group was expected to be due to compression of the second clay layer below pile tip level (Clay II, Elevation -40m). This layer varies in presence and thickness, i.e., at some locations the thickness is 1.5m, while the layer is not encountered at some other locations (Figure 1).

The analytical method, which was based on Dutch Code guidelines, resulted in uniform settlement of the base slab of approximately 15 cm, when a uniform 1.5 m thick Clay II layer was considered, and 4 cm when the Clay II layer was not considered, as presented in Figure 2. Therefore, the estimated differential settlement could be as high as 11 cm. Based on the analytical results, it could not be concluded that the (differential) settlements meet the Clients requirements.

The main advantages of the Finite Element Analysis method are:

The main advantages of a 3D modeling scheme are:

The sand layers were modeled using the Hardening Soil model with small strain stiffness (HSsmall). The soil stiffness parameters of the HSsmall model were based on the CPT data. The clay layers were modeled with the Soft Soil Creep (SSC) model. The soil parameters were based on CPT and laboratory results. The SSC model is suitable when considering creep, i.e. secondary compression. The creep was taken into account for a period of 30 years. The representative soil parameters of the Sand II layer and the Clay II layer are given in Table 2. 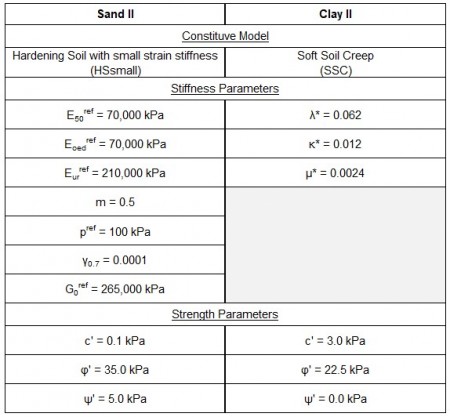 The foundation piles were modeled using the “embedded piles” feature. The piles distribute the structural load to the Sand II layer underlying the 1st clay layer (Clay I). The pile-soil interaction was modeled by a representative skin resistance of 0 kN/m up to the 1st clay layer and 500 kN/m thereafter, as well as with a representative base resistance of 13 MN according to the pile bearing design. The pile-soil interaction was verified for a single foundation pile in the 3D finite element model. In a calibration model, one large diameter bored pile (Ø 1.5 m) with a length of 34 m was modeled in the subsoil.

Due to stress redistributions accounted for by the finite element program the rotation is smaller compared to the analytical model. Based on these results, it could be concluded that the differential settlements meet the Clients requirements.

Moreover, based on the PLAXIS 3D Finite Element Analysis, the pile head forces were also computed, as shown in Figure 4. It was concluded that about 80% of the structural loads were transferred to the piles. The remaining 20% of the structure loads were directly transferred from the foundation slab to the subsoil. If the load was evenly distributed over the 59 piles, the corresponding pile head load would be 5,450 kN/pile. However due to stress redistribution the piles in the area without the Clay II layer carry more load than the piles in areas with the presence of the 1.5 m thick Clay II layer. Therefore, it was observed that the stress redistribution in the 3D finite element analyses resulted in a reduction of differential settlements. Finally, Figure 3 also shows that the pile head forces at the outer ring are larger than the pile head forces at the inner rings.

Based on this Case History, the following conclusions can be drawn:

The problem of analyzing and designing deep foundations is relevant to many civil engineering struc...

Pile foundation is actually a slender column or long cylinder made of materials such as concrete...

Soil-structure interaction is a crucial aspect for both geotechnical and structural fields. There i...

This is a summary of technical paper "Predicting Eccentric Stresses for Large Diameter Open Ended P...